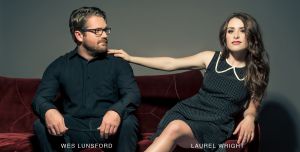 I am going to start this by saying that I have played The Young Fables album non – stop since it fell through my letter box on a bright summer’s morning. Going in not knowing what to expect at all, I am surprised to find it is now a favourite of mine.

This debut album (titled TWO) is full of nice Americana/Country sounds, without a trace of the Pop country sound that we are so used to hearing these days. Every song on this album is a joy to listen to, with traditional Country stylings and instruments and interesting story-telling lyrics, as Country Music should be.

There is not a bad song on this album – it has a nice flow to it making it difficult, if not impossible, to want to skip a song.

Laurel and Wes – who make up The Young Fables – clearly fit perfectly as a duo and write Country Music perfection together, with many of the songs having toe-tapping melodies. It is one of those albums that you want to sit down and not just listen to, but REALLY listen to. Laurel has such an interesting voice, which is really hypnotic and mesmerising with a stunning Southern tone that suits this style of music perfectly. Her voice is very similar to that of Mindy Smith combined with Kimberley Perry from The Band Perry. The album has similarities with Mindy Smith’s music as a whole – as well as Ashley Monroe’s and Kacey Musgraves’.

I have so many favourites, it’s hard to choose one but I’ll do my best. My number one favourite track off the album is probably The Road Home – it’s a homely song with warm-hearted lyrics, which I love, and the chorus has such a nice gentle folk-country feel to it.

However, another favourite of mine is the song Bed Of Roses – this is the song, I would say I sing along to the most and find myself singing randomly around the house.

Isn’t Enough – another favourite – has lyrics which give a sense of reality to it and it has a very Ashley Monroe / Pistol Annies vibe to it. This is almost Country Blues with a nice guitar riff throughout.

Paradise – I love the guitar riffs in this song too – and the guitar solo halfway through. Lovely harmonies during the chorus – and stunning vocals throughout.

Completely – which is set to be their next single – is a nice mid-tempo tune with a gentle chorus. The Young Fables are hoping to fund a video for this and have set up a GoFund page. Please visit https://www.gofundme.com/2gqejxrr

The more up-beat tracks off the album are debut single Two, Better Hand and Worse. All three are really great tracks with infectious choruses.

Laurel’s vocals really stand out during the songs A Lifetime, September and I Love Him Too, showing a really nice range, perfect pitch and great vocal runs.

This album deserves a lot more recognition than it has received so far – I hope it won’t be an album that gets overlooked. It is certainly a hidden gem for me – a great find, which I am so grateful for being sent a copy to review, otherwise I would have never known about The Young Fables. I highly recommend you give this album a go, especially if you lean towards the softer side of Country or enjoy Americana music – even folk! I honestly don’t see this CD leaving my car anytime soon.