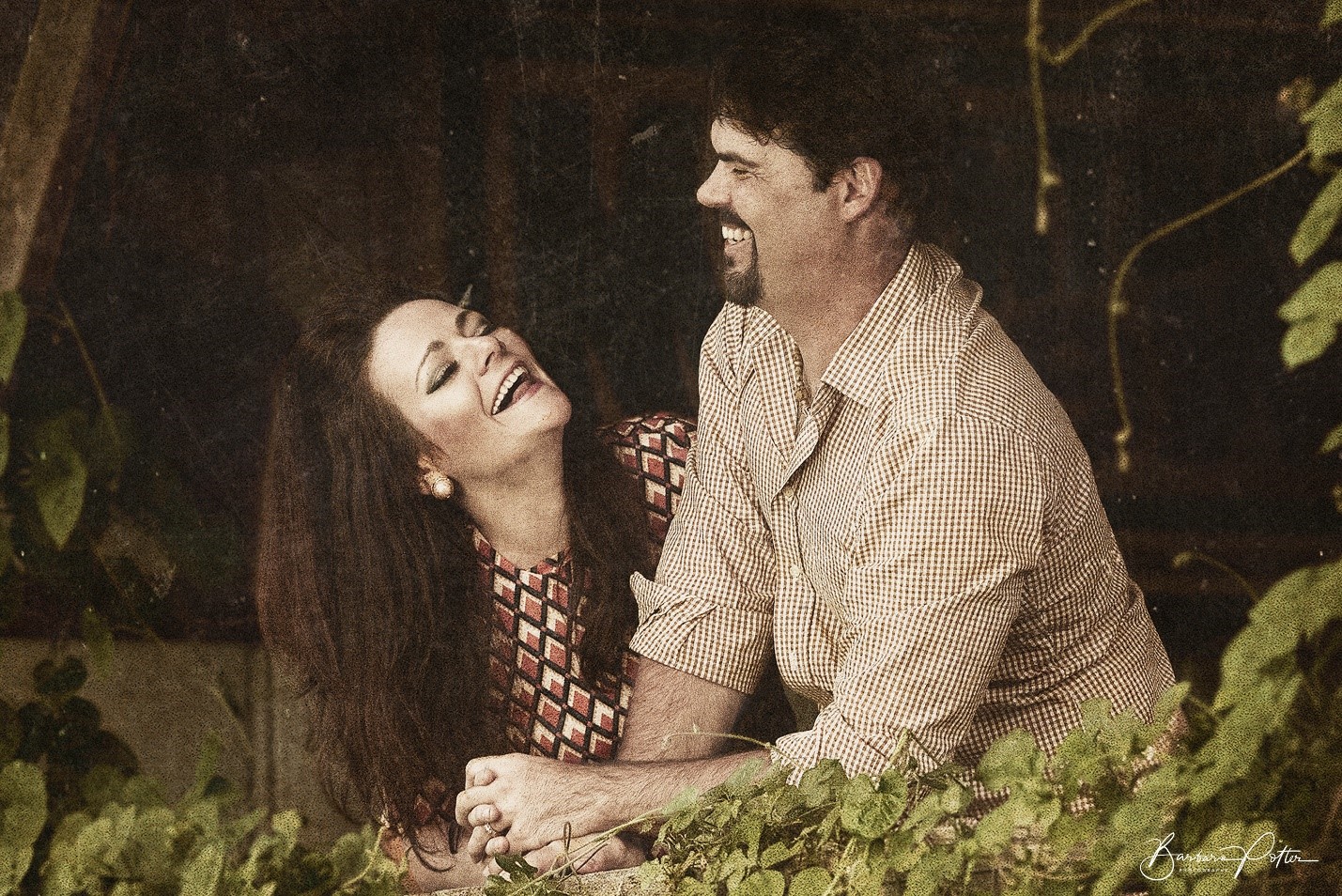 In thinking about the possibilities in music, one might ask the question as to how a Hippie chic from New Jersey and a Country music man from West Virginia could come together and create one of the most unique sounding Country albums of 2019?  To answer that question simply indulge yourself in the newly released music of Carvin Walls!  Their album titled “Between Us” hit the market on January 18th and it is one of the best albums that I have listened to in a long time.

As I made the drive to Nashville, I listened to “Between Us” nonstop.  Taking mental notes of the uniqueness in each song’s lyrics, as well as the voices behind them, Kelly (formerly “Carvin”) and Troy Walls.  I was on the edge of my drivers’ seat anticipating the first opportunity to see them perform live at their album release party at the Douglas Corner Café.  I could hear the sass in Kelly’s voice and just couldn’t wait to see her and Troy on stage that evening. 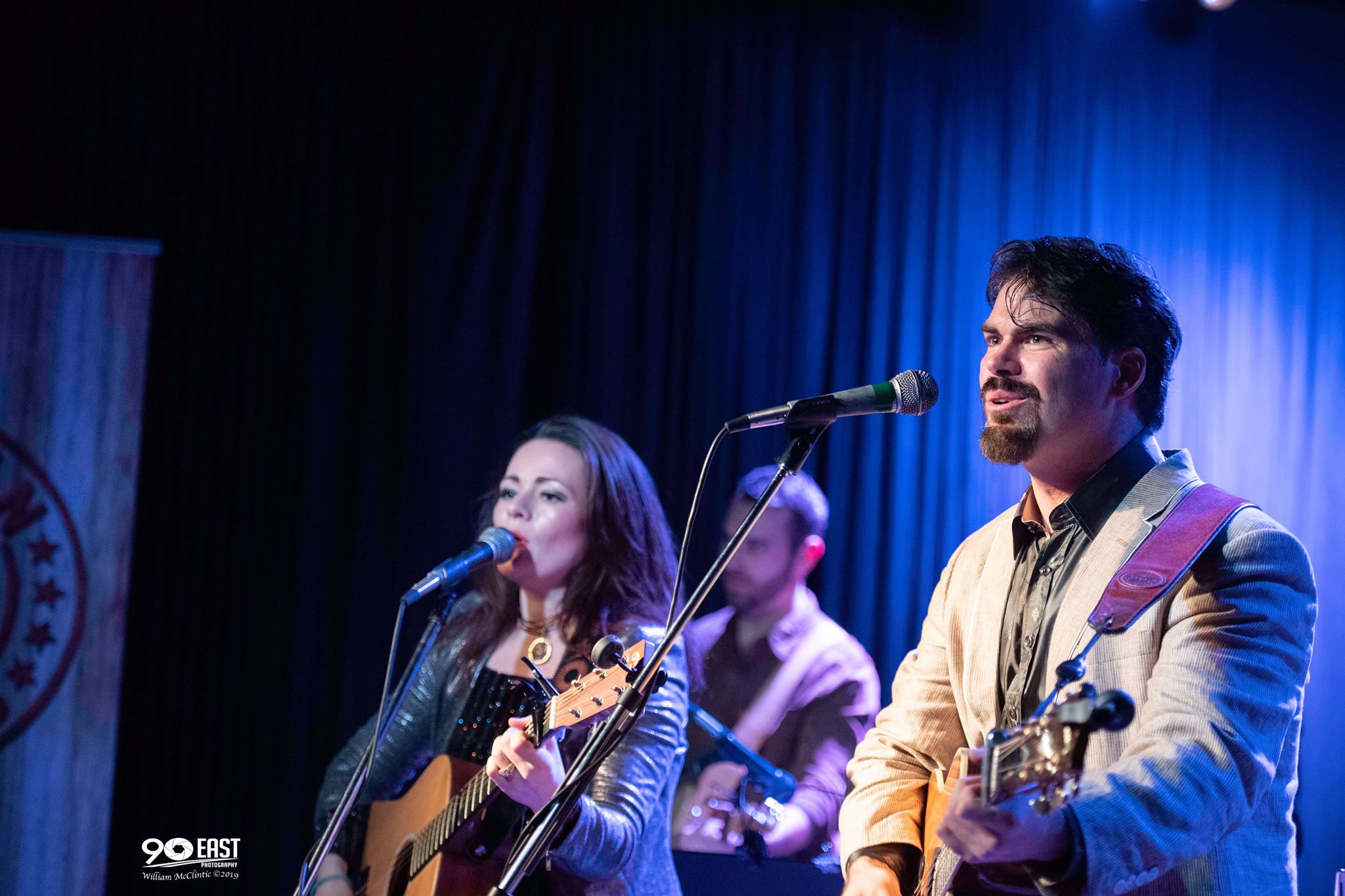 Carvin Walls had already taken the stage when we arrived, and it appeared that they were two songs into the set. As I listened and watched them perform, I could see and hear the uniqueness of this charismatic husband and wife team.  The vocals were truly mesmerizing, and Kelly was bringing the sass!  It was a packed house with all eyes and ears on this phenomenally talented duo. You could just feel the stories they told with their music. As a bonus, they treated everyone to a perfect cover of “Jackson”.  It fit them so well, and their magnetism charmed the pants off everyone in the audience. I imagined Johnny and June Cash happily dancing in the streets as they watched and listened from above! 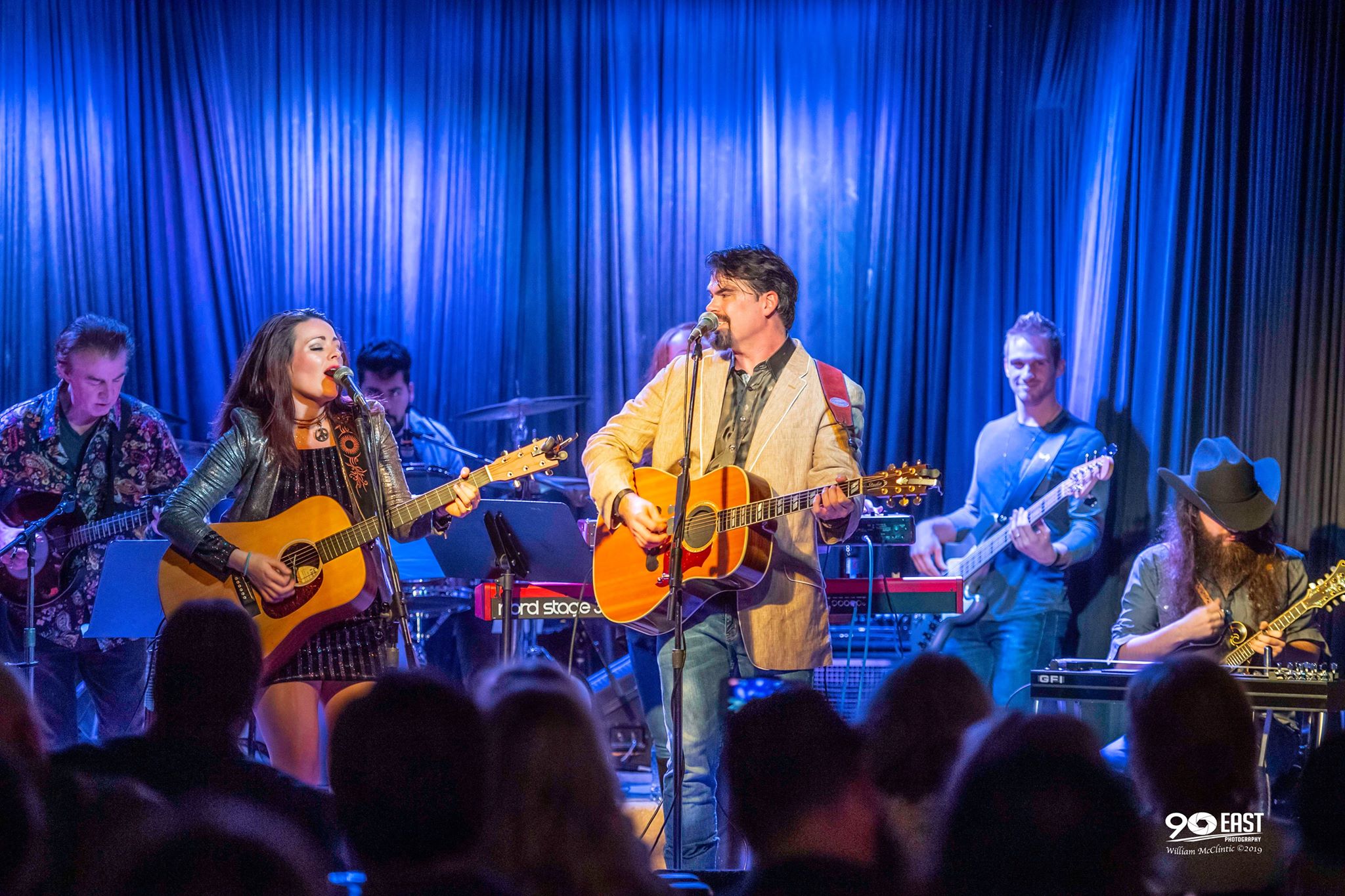 Kelly and Troy sang the album’s first single, “Sometimes I Lie” with true passion, and ended the set with their fun song “Hippie”.  To see them perform live and watch the synchronicity among these two polar opposites was unexplainable. It just works, and that’s all that matters.  Once the set was over everyone headed to the 404 Bar and Grill for the afterparty.  Kelly and Troy were on cloud nine and it was a joy to see them celebrate their release with another packed house!

The next day, I met up with Kelly and Troy to talk about the album and their unusual combination of musical influences, their different but synchronized paths to Nashville, and what’s next for this creatively talented duo.  It was a sunny day, so we parked ourselves on the patio at the Whiskey Kitchen in the Gulch, sipped on the best Bloody Mary’s in Nashville, and began talking about the hard work and determination that went into making “Between Us”. 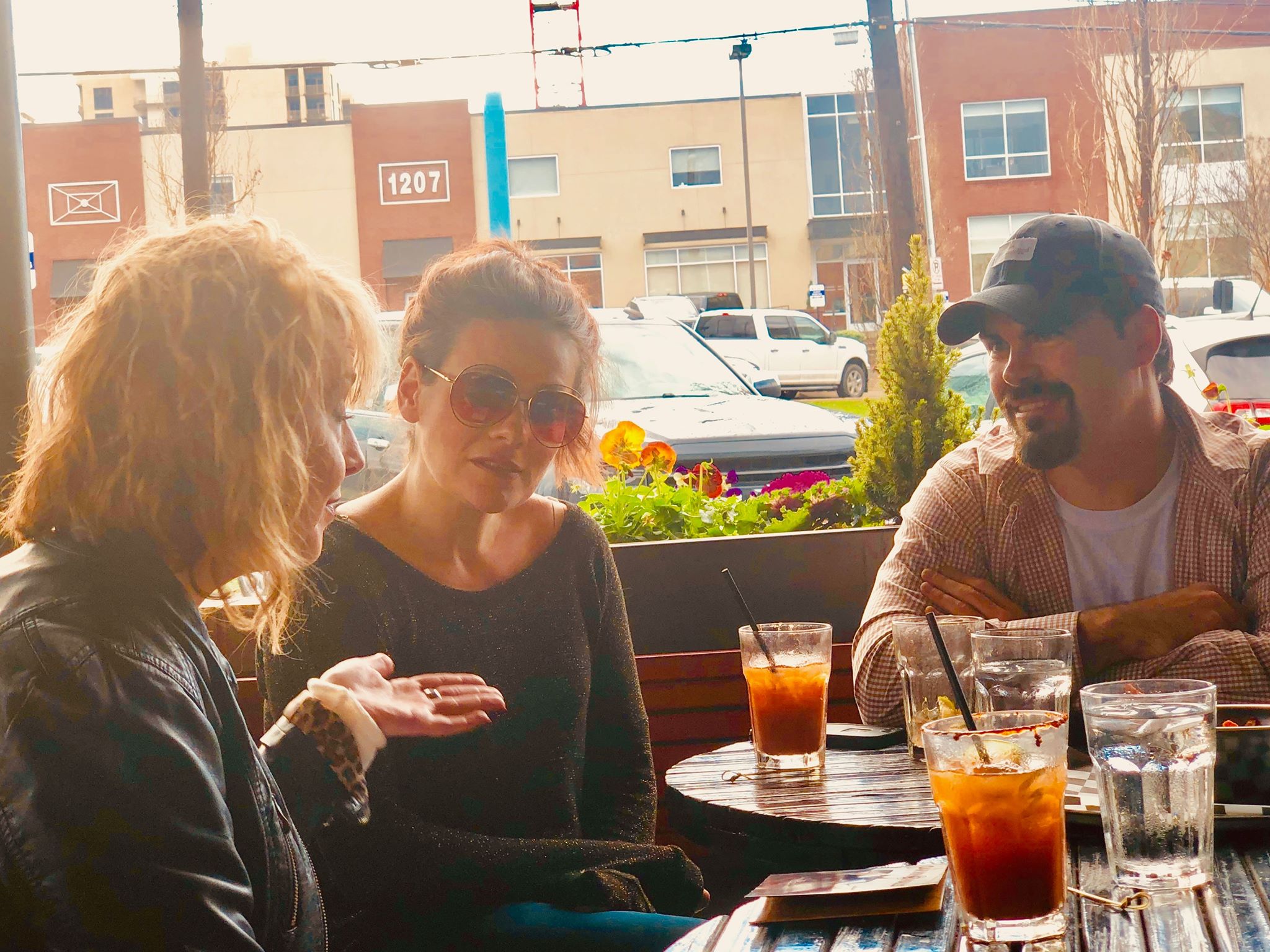 Of course, me being who I am, I wanted the details of the entire Carvin Walls story before they became a story. Kelly began with telling me that she was originally a pop singer from New Jersey prior to coming to Nashville permanently.  People in NJ kept telling her she should move to Nashville as she had been visiting the city quite often. During one of her return trips home from visiting she got a speeding ticket in Virginia with the term “reckless driving” attached to it.  She said that’s it, the only way I’m going back to Nashville is if I move there. When her father found out she had gotten the ticket, he told her she should go to court and have it reduced.  She told him she wasn’t driving all that way for a court date, then she realized the sign.  It was time for her to pack it up and move south.  She became a Nashvillian by way of “reckless driving”.

Troy’s story is somewhat less dramatic in roadside events.  He is originally from West Virginia and a country man.  He was commuting between Indiana and Nashville staying every other week between the two.  He owed his own business and couldn’t just pack up and move, but one day he knew that if his dream was going to happen, he had to make the permanent move. He went home to Indiana, sold his part of the equipment to his business partner and made the move to Nashville permanent.  No more commuting meant more focus on songwriting and music.

Now’s where it gets interesting, one evening Kelly and Troy found themselves sitting at the same table at Neighbors Bar and later that night, both ended up the Douglas Corner Café’s songwriter round. Never met prior to that evening and didn’t know that they would be sharing the same stage on opposite sides later that night.  In one short week after that night they began writing songs together.  Fast forward several years, they are sharing the SAME stage as husband and wife, celebrating the release of their new album “Between Us”!  I just love a sappy love story and these two are truly in love!

Spending time with Kelly and Troy is like looking at two universally synchronized paths which have come together to form a golden road.  Their musical influences are so different, Kelly being influenced by Janice Joplin, (which is even mentioned in the song “Hippie”), Joni Mitchell and various other “Woodstock” artists.  Troy is heavily influenced by Merle Haggard.  When you put these together you get a sound that is properly titled Carvin Walls!  No one has the sound these two have merged together, it moves you. Words can’t describe it, you just feel it!

As Kelly and Troy talked about the creative process of Between Us it revels as an organically created album.  The studio time was funded by Kelly and Troy building Ryan Rossebo’s entire recording studio in his basement. Rossebo played strings and keys and produced the album.  The music for each track was laid in the studio spending 10+ hours per song, prior to recording it. Kelly and Troy laid the vocals together in the same box on all but one of the songs. Regarding the songwriting, Kelly and Troy wrote all but two of the eleven songs together, Kelly was a writer on all eleven. The entire process took over two years.  They wanted to take time to harness their creative energy and amplify it in their album.  The end result is so fresh and rare. It exemplifies the unique sound that Carvin Walls can definitely call their own.

In observing that our glasses were empty, and the evening was getting late, I asked Kelly and Troy if they had a special message for their fans.  This was their response: “Don’t be scared to “do you”, dream big, be brave, and trust you will find love and happiness in all that you do!”  Personally, I couldn’t think of a better way to end the day than experiencing the humble kindness that these two talented and special human beings have to offer. They love their music, but it’s the fans that they truly love, appreciate, and can’t wait to share their journey with! 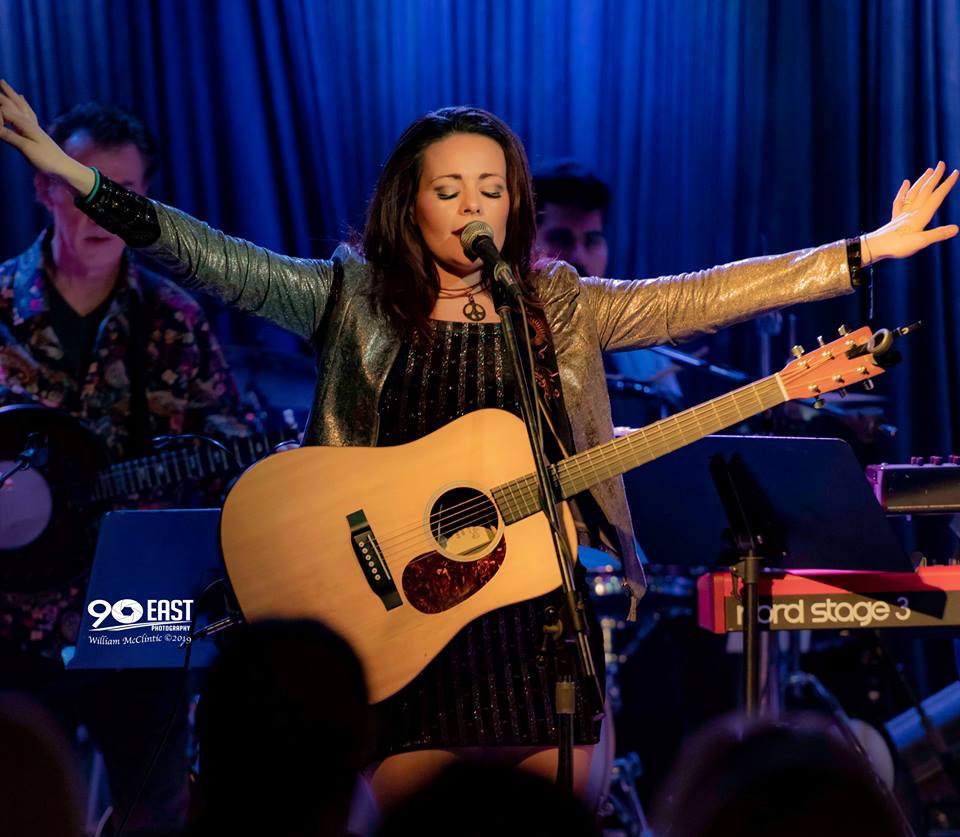 Carvin Walls can be found: