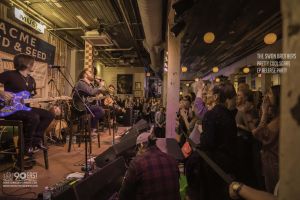 Zach and Colton Swon first entered our lives the way so many country stars seem to these days, via a television talent show.  Finishing in third place on season four of NBC’s “The Voice”, the duo from Muskogee, Oklahoma were favorites from the beginning, and some thought they had the whole thing in the bag.  Ultimately, Danielle Bradbery walked away with the big prize, so clearly, it was country’s year to shine on the show.

Signed to the Arista label after “The Voice”, The Swon Brothers released a self-titled CD, with the single “Later On” doing quite well on the country charts.  The brothers have since parted ways with Arista, and have now started their own label, TSB Records, and on that label have just released their new EP, “Pretty Cool Scars”.  No band releases an EP without some form of celebration, and in Nashville, you can always expect at least a little more excitement than anywhere else in the world.  Zach and Colton Swon are excited about this project.  You can feel it in the music, and you can see it on their faces. They are in control now, and they were throwing a party! 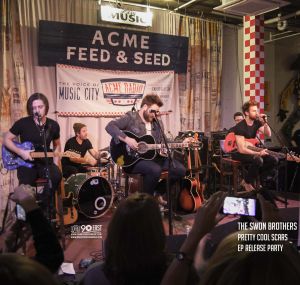 Acme Feed & Seed, at the foot of lower Broadway, is a multi-level bar/restaurant and often, events such as new music release parties, are held in a private room upstairs, out of the public’s eye. Not this time. The Swon Brothers were there to share this one with everybody, playing on the main stage, right downstairs.  Whether you were a lifelong friend or some guy that just flew into town for your very first vacation in Nashville, you were welcome to hang out with them.  There were no velvet ropes to cross, no lists to find your name on.  The only rule was, make sure you’re over 21, because the drinks were flowing.

If you were one of the lucky Music City visitors that just happened to be at Acme to have dinner or listen to music before the party started, and truly had no idea what was about to happen, you were treated to something you could go home and tell your friends about. You got to witness The Swon Brothers soundcheck (which many patrons mistook for the actual show until the guys introduced their opening artist and left the stage) and see something that’s generally kept under wraps to the general  public.  This, of course, leads me to mention the opener, Brandon Green, a bluesy guitar player, who performed covers of everything from “The Jeffersons” theme song to Blackstreet’s “No Diggity”. Talk about a guy who knows exactly what to play to a mixed up crowd to get things moving in the right direction. Look him up. 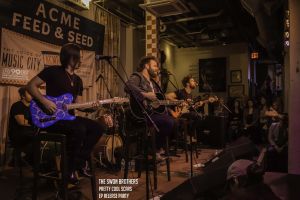 So, imagine if you will, a bar that is packed so tight with humanity, that even this reviewer was left to crouch near the stage with a notepad, in the most awkward of positions, to try and capture the rest of the evening.  Even if the food and drinks had you dragging out your wallet, the entertainment was free, and it was going to be good.  Nobody was leaving.  In fact, it seemed people just kept on coming in. Thankfully, The Swon Brothers jumped on stage soon after the opener. 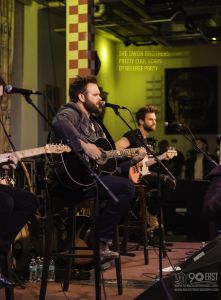 They started strong, with the first track off their new EP, “Dwight Trashed”. This song is heavy on name droppers. I won’t ruin it for anyone who hasn’t heard it yet, but it’s simply a killer tune, destined to go down as one of those party anthems, country cover bands will be playing for tips on Broadway for pickle jar tips for years to come.

Make no mistake, this wasn’t just a celebration, this was an EP release party, and those EP’s were being RELEASED.  The merch folks were absolutely doing their job at every given moment during the show, holding up copies of the EP, and making sure that everyone knew they were available for sale, for a nominal price of ten bucks.

A highlight of the night came early when the brothers Swon sang, what’s become a signature song for them, a cover of The Nitty Gritty Dirt Band’s “Fishin’ in the Dark”.  The audience sang along, danced along, and probably even spilled a few drinks on their neighbors, as their neighbors weren’t more than an inch or two away, but everyone was having a good time, and at least from where I was, I didn’t see any punches thrown.

A ballad off the new EP, “Don’t Call Me”, slowed things down a bit, and also had Colton promising the crowd that a new video for the song would be coming out soon. Who doesn’t love a new music video? The song stands well on its own, so the video should be something to watch for.

Zach Swon came out playing guitar, Colton on bass, and they weren’t alone. They brought along a pretty impressive band to make this thing the party that it turned out to be. On lead guitar, Blaze, from Las Vegas. A crazy juxtaposition of extremely laid back, yet somehow, heavily jamming at the same time, this is one talented guitarist. Don’t ask for a last name here. “Just Blaze.” Okay. That’s all we need.

Utility player, Seth Costner impressed on keys and six string banjo. My guess is you could place almost any instrument in his hands and he could play it. Another guy that they are fortunate to have along for the ride.

The Swon Brothers were fortunate to open for Carrie Underwood on her Storyteller Tour in 2016, and must have made a friend in her drummer, Garrett Goodwin, because guess who sat in on drums for their EP release party? Oh, too easy, right? Yes. None other, than Goodwin himself. A truly outstanding drummer, this was a big surprise and just another reason to love Nashville. You just never know who might show up to play.

Remember when I said it was obvious that Zach and Colton are now in control of their musical destiny? They really are. They just ruled the room, and not in an arrogant way – not at all. More of a happy confidence.  This time, they know they’ve got it.  This EP is THE ONE, so this show was going to be all about doing it their way. They didn’t necessarily have to play every song off the EP, in order, just to push it (the merch people were hawking quite effectively, as they were supposed to be).  They wanted to play some songs they loved, and they went on one of the best strings of covers I have ever personally heard a major act play.  Being true “Okies from Muskogee”, they started it off with Merle Haggard’s “Working Man Blues”, and continued on with “American Pie” and “Brown Eyed Girl”.

What could be better than  The Swon Brothers doing a crazy long set of cover songs? How about if they do a medley of their favorite band’s hits? Zach and Colton are huge fans of The Eagles and they gave the crowd at Acme a big old musical present when they played snippets of “Witchy Woman”, “Lyin’ Eyes” and “Take It To The Limit”.  “Life in the Fast Lane”, well, that one, it got its own special moment. It required some actual guitar acrobatics and such, you know.  This was so very much a duo and their band playing their favorite stuff. So very Nashville. So very much a reason for anyone who was there to be thankful they were.

Was the coverfest over now? Must be. I mean, they did SO many already. Wait. This is Music City. This is a duo who just released a new EP with some pretty amazing songs, on their own label. They are now the captains of their own ship. Coverfest over already? Oh, Hell no. How about some Doobie Brothers “Listen to the Music” and Bob Seger’s “Turn the Page”?  In control, and more fun than anyone could have expected – and the EP’s were selling. I was watching.  I’m no expert, but I would have to say, up until this point, everything was working out pretty well.

The music was selling, but Colton decided to throw out a trivia question and give a signed EP away to the person who could answer correctly. This was a party, and parties offer prizes. This little break in the music only took a minute, at which point the guys jumped into their biggest hit to date, “Later On”, and finally the title track off the new EP, “Pretty Cool Scars”, which closed out the evening.

They took a risk. A Saturday night on Broadway. Tourists. Locals. A free event. Things could easily have gone all wrong. Sure, it was crowded, but isn’t that what you want? You want your music heard. You want your music sold. You want to be seen and you want to celebrate. This might very well be THE ONE guys. I know I downloaded the EP prior to attending the show, and I was impressed. I think it’s their best yet. I think they’ve got a new attitude. I think they’ve got some experience under their belt and I think they’re ready to really shine this time. Let’s just borrow a line from your idols, I don’t think they’ll mind.  “Take it to the limit, one more time.”