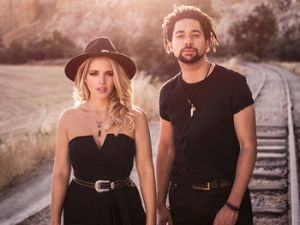 After a successful end to 2016 duo The Shires are back out on tour in support of their latest album ‘My Universe’. Like last year tickets for shows were quickly snapped up, with only a handful of tickets remaining, proving their popularity amongst the British public.

I caught them at the Warwick Arts Centre which despite the name, is in Coventry. Upon entering the Butterworth Hall (a 1, 540 capacity concert hall) I quickly noticed the majority of the audience were older than myself showing just how much their audience have grown over the years. I know many people had complaints regarding the hike in ticket prices, but I feel it reflects their current audience – people who go to a concert every once in awhile as oppose to those who frequently attend them.

After a short set from rising UK star Catherine McGrath (trust me, she’s going to be huge) it was time for Ben and Crissie to take the stage. Opening with the anthemic ‘Nashville Grey Skies’ people stood up and clapped along, giving them a warm welcome to Warwickshire. I’ve seen Ben and Crissie play several times over the past three years and somehow, every time feels like the first. Their set was filled with tracks from both albums plus a sublime cover of the Robbie Williams classic ‘Angels’ and ‘Islands In The Stream’ originally made famous by Dolly Parton. The uptempo tracks (‘Friday Night’, ‘Tonight’ ‘A Thousand Hallelujahs’) to name a few, had the crowd clapping and cheering along, which put a huge smile on my face.

It wouldn’t be a Shires concert without adding a few ballads into the mix though. Songs such as personal favourite ‘Statelines’, ‘Naked’, ‘I Just Wanna Love You’ had the crowds attention as they sat and listened to every word. One of the main aspects of country music is the stories behind the songs, the heart wrenching ’Daddy’s Little Girl’ is a track Crissie penned as a tribute to her father whom she lost 20 years ago. The room fell silent as she poured her heart out in front of us, earning her a well deserved cheer from the audience when she’d finished. The duo are down to earth, generous people who have worked hard for their success. Ben, having become a father only ten months ago, was touched by a story that he heard whilst backstage doing a meet and greet. There he met a couple who told him their 20 month old child is sick. Their aim was to raise some money for local charity – Zoe’s Place, which is based in the city. Clearly touched by the story, In an overwhelming moment towards the end of the show, Ben generously donated his guitar adding that “they wouldn’t get much for a signed lanyard”, earning him a standing ovation.

Ending the show with a three song encore, and requests of more, proves that The Shires are clearly adored by the fans that attend their shows. I’m certain this will continue to be the case as their career heads into new chapter.