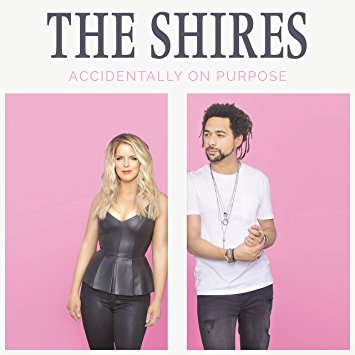 With their new studio album “ Accidentally on Purpose” due for release on 20th April check out the uplifting lead single “ Guilty “and associated UK tour kicking off shortly afterwards, what better time to catch up with Ben and Crissie?

Thank to the duo for finding time in their busy schedule, I hope you enjoy reading our fun chat!

1. LH What a busy time you have ahead, you must be very excited about having new music out pretty soon and to be hitting the road again?

BEN Yeah, we’re mega excited! The single came out on Friday, the your is just HUGE ….we’re doing the Royal Albert Hall, the Bridgewater Hall in Manchester, in all we’re playing twenty one dates I think! The whole thing’s just a massive step up, “ Guilty” is very different from what people are used to hearing from us …

2. LH Yes, i was going to ask about that, is seems much bigger both instrumentally and vocally from your previous material…..is that an indication of what we can expect from the whole album?

C Yeh definitely. We recorded it in a different format and wrote with some incredible writers, some of the top writers in Nashville which i think is reflected in many of the songs. We changed our producer for this album and we basically sat in one very small room and recorded all the vocals, and all the instrumentals were also recorded in a very small set up. But yeah there’s a lot more production, the way a lot of pop artists record but it’s definitely still on the country side , much more banjo and mandolin on there……there’s something for everyone! We really did live it up when we were in Nashville with the younger crowd there, partying all the time ( you really can’t say no to them!) which is definitely reflected in some of the songs but there’s also the ballads on there that Ben and I love.

3. LH Is there a track that you’re particularly excited for us to hear for the first time on release date?

BEN There’s a couple, “ Sleepwalk” is one of our favourites, I was writing with a guy who told me about his idea for it, we changed a few things to make it work for Chrissie and I but everyone who has heard it says how beautiful it is . It’s quite hypnotic! And obviously the Ed Sheehan song too, “ Stay The Night” …….

LH Yes I’m excited to hear that one!

4. LH You talked earlier about writing with some of the top Nashville writers…..I gather that includes Jimmy Robbins who you co-wrote the title track with?

C Yes! The song “Echo” too.You know he is just so much fun and he’s just all about the song! I remember when we were in the session Ben kept referencing songs not realising he’d actually written most of them! He’s really cool and has all the plaques up on his wall in his studio which is really cool to look at. He really is about finding the lyric, that specific line ……and he loved the idea of “ Accidentally On Purpose” . It was our last session, we were leaving Nashville the next morning ….I had met someone out there and was having just such a wonderful time, i was contemplating maybe staying a little longer, Ben and Jimmy were just sitting there taking notes and saying “ keep talking!!” . That’s how that song got written basically!

LH Yes i’ve read about how that’s the most personal song you’ve written lately and i’m really looking forwards to hearing it!

5. LH You mentioned earlier that your London date is at the beautiful and iconic Royal Albert Hall, that’s going to be a real “ pinch me “ moment I bet when you walk out on that stage?

BEN Yeah! I spent a lot of time in West London growing up, I’d drive past it and think “ one day…..” .The idea of just playing there was incredible but headlining there……it’s going to be just absolutely awesome! We enjoy playing live and just looking out at the audience, sometimes i just feel a bit sorry for the people who can’t see what we see, massive smiles on people’s faces, hands up in the air. It’s the most magical thing.

6. LH Now you’re playing much larger venues do you miss being up close and personal to your fans? Is that one of the down sides to your success?

C Do you know what, many of the venues we play are still intimate in the way that they are not arenas where you are up in the heavens ….. we can still see every single face in the audience. But yeah little venues are always really good fun, everyone is stuck to each other and crammed in ….so many of our fans tell us they were there in those days….

LH That’s the one!

C Now we have seated venues which is great as people can get up on their feet and dance but still have a seat for the ballads, which we like to sometimes strip down and play acoustically. Many of our fans remember us in that way, just the two of us……We’ve also taken example from Little Big Town , we’ve been on the road with those guys and have watched them, they just blew us away this weekend, we were sat there with our mouths wide open ..

BEN When they did the tribute to Glen Campbell, that was just incredible…..

7. LH We’re running out of time sadly, can I just ask you if any of the many extremely talented UK country artists coming through at the moment have particularly come to your attention?

C She’s so wonderful, it feels that she’s stepping in where Taylor Swift left off her country career. I think her lyrics are going to appeal to a much younger audience….she sings about being a young girl and I love that side of her….

LH Saying that, i’m definitely not a young girl and i love her too and have tickets to see her upcoming Bush Hall show!

8.LH Finally, do you have any message for your fans?

BEN Just thank you so much! I hope they’ve enjoyed the last few years as much as we have and being on this journey with us! We hope they’ll enjoy this slightly new direction we’ve taken ……we can’t wait for people to hear the new record!

LH I’m very excited about it all and will see you out there on the road for sure! Many thanks for your time today.

To Pre-order “ Accidentally On Purpose” and get details of all the Shires UK tour dates check out theshiresmusic.com