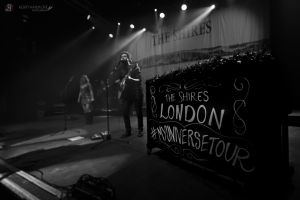 Here at Think Country we follow not only the best in American Country but also our great homegrown talent here in the UK. On Sunday night I got the chance to head to Shepherds Bush to see Gold Certified artists, The Shires.

We have followed this talented duo since the beginning and to see a sold out audience singing along to every word of every song at the 2000 capacity venue was something very special!

The pair have just been signed by Big Machine Records in Nashville and headed out on tour this time around with American Country artist Canaan Smith. 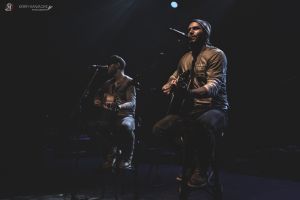 He began with a great acoustic set, gearing up the audience and getting us all in the mood for the Shires. He of course included, in his set, the fantastic single ‘Love You Like That’ which I have to say is one of my personal favourites!

They also brought the show to a momentary pause and brought the lights up as someone fainted in the audience! Now I have seen a lot of people faint over the years at shows but this must be the first time I have seen an artist stop his performance for it!

After all the drama it was time to set the stage for the main act and as Ben Earle and Chrissie Rhodes walked out onto stage a cheer quite literally erupted around the theatre as the broke into ‘Nashville Grey Skies’. What better way to kick of the show than a song which tells everyone exactly who they are. They might be Country but they are proud to be British!

The band were set up on stage on various level platforms to give some variety to the visuals and a large ‘field’ design cloth branded with ‘The Shires’ hung down as a backdrop.

Throughout the night the pair sung hits like ‘Friday Night’, ‘Brave’, ‘State Lines’ and their most recent single ‘My Universe’ which also happens to be the name of the tour, in honour of their latest album.

The energy on stage was constant, there was never a silent moment even when the mood and tempo was brought down to some of the slower paced tracks they kept it moving along which kept the audience engaged at every moment.

An emotional Chrissie also took the time to sing a self penned song called ‘Daddy’s Girl’ written about her dad who passed away around 20 years ago. It was in that moment with just her and Ben in the spotlight that something special happened. We all know that Chrissie can sing but the emotion in that performance was something out of this world. 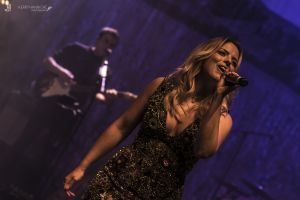 Ben took time on stage to swap between his guitar and keyboard during the set. I don’t know how you all feel but I love watching Ben behind his keys, it feels like he is most comfortable and it’s so great to seem him there! His vocals shone through the night and his and Chrissies harmonies really cut through the music in every song. 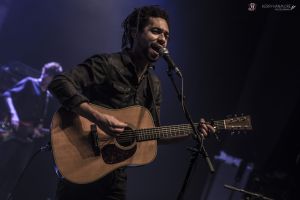 If there’s anything us Country fans love more than great lyrics in a song it’s great harmonies and this duo deliver both consistently!

The band were tight, polished, looked great, sounded great and as a whole the night was great!

Seeing these guys grow makes me proud to be a part of the British Country Music scene and I can’t wait to hear more from them and see what else they bring to their tour in future!

If you didn’t get a chance to head out to this tour or you missed out on tickets don’t fret! This hit selling Country duo just announced another tour for 2017, running from April to May!

Get your tickets here: http://theshires.seetickets.com/tour/the-shires?aff=id1umg&src=UMGUK11553-477738