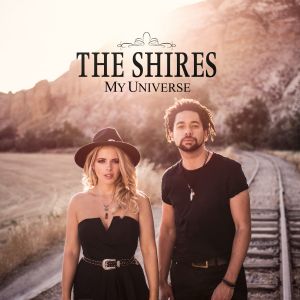 With country music at the height of its popularity homegrown act and pioneers of UK country, The Shires are gearing up for the release of their sophomore album, ‘My Universe’. The duo comprised of members Crissie Rhodes and Ben Earle, made history last year when they became the first ever UK country act to debut inside the top ten album chart with ‘Brave’.

The title track gives a perfect introduction to the album, with lyrics inspired by key moments in both members lives. It’s the official lead single from the album, and the video has been used as part of the It Can Wait campaign, which raises awareness of the dangers of texting whilst driving.

Released as a taster of the album ‘Beats To Your Rhythm’ will be the one fans are most familiar with. It’s catchy and has some great production, however the drums overpower the vocals at some points throughout. ‘Not Even Drunk Right Now’ follows the same upbeat patten as the previous tracks, and crowds will no doubt sing along with the infectious chorus when they tour in support of the record later this year.

From the first three tracks you can tell something has changed. It’s still country music, their harmonies are still just as sublime, however the production is bigger, their vocals are stronger, and they genuinely seem more confident in their craft.

Ballad ‘Naked’ is one of the album’s early highlights. Lead by Crissie’s soft vocals, lyrically it focuses on the importance of trust in a relationship, and allowing your partner to see the best and worst of you. It was written by Ben alongside Nina Nesbitt, who isn’t the only artist to lend their songwriting talents on this album. Fellow country star Kip Moore holds a credit on the memorable pop/country track ‘Drive’. It will appeal to both the UK and US radio, so would be an excellent choice to launch their career stateside.

Slowing down the pace the heart wrenching ‘Daddy’s Little Girl’ was written about the passing of Crissie’s father. It’s country to the core and her delicate vocals only add to the emotion here. ‘Everything You Never Gave’ deals with the absence of Ben’s father throughout his childhood, whilst giving a positive spin as he promises to learn from his father’s mistakes, as he raises his own child. These two tracks are cleverly placed and I love the contrast between them.

Heading towards the end of the record ‘A Thousand Hallelujahs’ is a fantastic sing along track that features a gospel choir. It’s guaranteed to get stuck in your head and will stay there long after the album has finished.

If you’ve recently gone through a breakup, ‘Other People’s Things’ is sure to strike a chord with you. It’ll be a familiar track to those who saw the duo on tour last year. Having loved the song for quite some time I eagerly awaited the studio recording. Lyrically the song is very detailed and softly sung over a simple piano melody, which is later heightened with the sound of drums, they’re not so heavy that they detract from the emotion though. With simple lyrics backed up with beautiful harmonies, ‘Desperate’ makes a stunning end to the album, however it’s quite similar to ‘How Many Love Songs’ which ended the duo’s debut.

With tales of love, loss and heartbreak, this album has everything you’d expect from a country record. As many of the tracks on ‘Brave’ were written by Ben before they were signed, ‘My Universe’ gives Crissie a chance to shine where songwriting is concerned. The album will appeal to both Pop and Country fans worldwide. Whether it’ll match the success of ‘Brave’ remains to be seen, however I’m confident it’ll be successful enough to guarantee a third studio album.