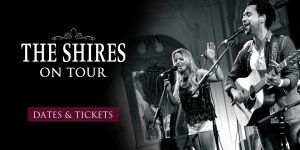 On October 7th The Shires are set to release their second studio album, ‘My Universe’ and last Thursday I had the opportunity to attend their secret album launch party at One Embankment in London.

With only one album released so far, The Shires have proven that not only are they very talented having been the first UK Country act to be in the top 10, but also that country music isn’t just for the USA.

Being a fan and having seen the Country duo live a couple times before, I was very excited to see what new material they had put together. I always love seeing them perform, as they give off such a sweet vibe, their harmony’s work perfectly together and they sure know how to get the crowd going.

After Radio 2 DJ – Bob Harris had introduced the duo, Ben and Crissie took to the stage kicking it off and getting the crowd singing along with ‘Nashville Grey Skies’. The duo then briefly spoke about the creative process and what it was like producing their second album with all their friends in Nashville.

It was only a 35 minute set, so they kept it short and sweet. After performing a couple of songs from their first album, they spoke about how they had both written songs about their fathers at different times, but how they happened to be such similar stories. This sparked the idea for ‘Daddy’s Little Girl’, a song about the relationship and loss between a father and daughter. This song is the epitome of country music. Lyrics that tell a story, making you feel an emotion and it’s safe to say that there was not a dry eye in the room. Even though we only had the opportunity to listen to a few of their new tracks such as ‘I’m not even drunk right now’ and ‘Hallelujah’ I can assure you that with a great variety of tracks, this is an album worth checking out. Even my mum who say’s “Country Music isn’t for me” loved their new tracks, so if this isn’t a sign that their new album is going to be a big hit, then I don’t know what is.

The night was topped off perfectly, as Ben and Crissie kindly stayed after the event to have a picture in the photo-booth with all of their fans… (Feel free to post the photo below)

Following on from the release of their new album the duo will be heading out on the road towards the end of the year! For dates and locations, see below and hopefully we’ll see y’all there!