Today (Jan 17th 2020) Nashville-based, UK approved country singer-songwriter Sarah Darling continues her Campfire Sessions acoustic project with a version of Dixie Chicks ‘Cowboy Take Me Away’, available to stream now via Digital Streaming Platforms HERE. The single comes hot on the heels of Sarah’s sell out December show at Union Chapel that bought together guests from the UK country scene including Ward Thomas, The Wandering Hearts and Jamie Lawson to perform solo and duet with Sarah in an evening of Christmas classics and country originals.

Originally released by Dixie Chicks on the cusp of the millennium, the track eventually climbed the US charts to reach the Billboard Country Charts No.1 spot in February 2000, as well as cracking the top 30 of the mainstream charts. Sarah re-imagines this US country favourite in her signature stripped back Campfire Sessions style, letting the serene guitar backing and her soft vocals effortlessly transport the listener to a cosy outdoor fire in the Iowa wilds. 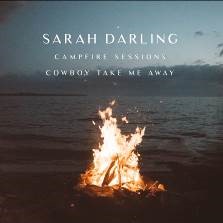 All the tracks chosen to be covered for the Campfire Sessions have been hugely influential on Sarah’s own musical output, and in her own words, ‘Cowboy Take Me Away’ is no different, “The Dixie Chicks and Shania Twain were such big inspirations in my music. Growing up this song in particular was an absolute favourite because of the scene it set in my mind. In fact, I remember thinking of this song when I was getting ready to pen ‘Where Cowboys Ride’. It’s the kind of country I truly love, and I have covered this around many campfires.”

Sarah released her first Campfire Sessions cover in 2019 and will to continue releasing these singles in 2020. The first song in this project, The Wreckers’ ‘Leave The Pieces’, was written in part by Billy Austin, one of Sarah’s friends. Billy Austin “was one of the first people to get me on stage in Nashville” says Sarah, “I used to cover this almost every weekend. Every girl loved this one because we were all getting our hearts broken and it was our anthem! I love playing this one with a circle of friends around.”

Also released in 2019 was the special single ‘Divide’, which featured backing vocals from long-time friends and musical contemporaries Ward Thomas, and the hugely successful 5th album Wonderland, which reached the UK Official Country Artists Charts Number 1. The album success paved the way for TV appearances on BBC Breakfast and a host of critical acclaim from the music press. The phenomenal success of Wonderland was a dream come true for the artist whose first UK concert was only 5 years ago, and her fandom in the UK has grown exponentially since then, a true testament to Sarah’s talent and hard work. It’s not every day that a fully independent country artist can make a transatlantic dream come true, and with a number 1 album under her belt, Sarah’s future looks the brightest it’s ever been; “Making ‘Wonderland’ has turned out to be one of the greatest musical adventures I’ve ever had. Every song tells my story, and imprints this very special time in my life, when I got to create a country album in the UK!”

Through hard graft, years of UK tours, immersing herself in the nation’s country scene and being embraced by the musical and fan communities, her acceptance by UK country music has been comprehensive. The time spent absorbing the culture and music lead to the early decision to co-write with a host of top British songwriters. The result – a number 1 country album on the official charts and two British Country Music Award nominations for ‘International Touring Artist of the Year’ and ‘International Album’. Her undeniable popularity landed her top spots at some of the biggest UK country music festivals such as Nashville Meets London, FSA Fest, SummerTyne, Cambridge Folk Festival and the headliner position at the acclaimed British Country Music Festival.