It may have been a chilly Friday evening in London but UK 5-piece The Orange Circus Band, who originally hail from Tunbridge Wells, soon lifted everyone’s spirits with a stunning headline show at London’s Slaughtered Lamb. 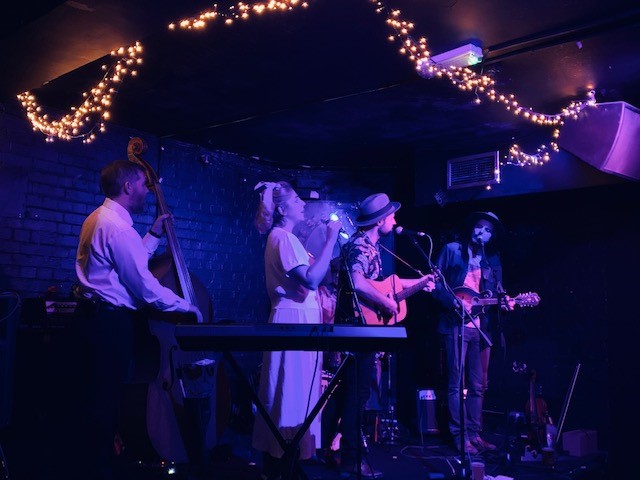 They were a “ new to me” band, on a friend’s recommendation I gave them a listen online and immediately loved their americana/bluegrass sound…..but would they shape up live? The answer was a resounding yes, their on stage energy was incredible and infectious, creating a real party atmosphere, and their musicianship and vocals (especially their tight harmonies) were impressive throughout. With all band members apart from their drummer seamlessly swapping instruments thought their set , I particularly loved the contribution of the fiddle and mandolin (courtesy of Raven!) and banjo, which of course are all defining sounds of there genre.

Performing mostly original songs, their forthcoming second album due out in May was naturally well represented  including their new single “Old Souls” which lyrically seems to me to sum up what this band is about…..their love of the music rooted in the Appalachian mountains of rural Virginia where their acoustic guitarist/ lead vocalist Flash Hearth’s grandmother Alice grew up before moving to Europe.

They were equally as impressive on ballads where banjo/keyboard player Jessie Moonlight tended to take lead vocals (by the way, apparently all band members quirkily have both their own names and circus names) , and goodness can she sing! Just give the beautifully moving bluesy  track “I Miss You”, again from the new album, a listen …..

Among my other favourites of the evening was the celtic sounding story song “ The Legend of Willie Rhoads”, taken from their 2016 debut album “ We Make Our Smiles” , the tale of an artist/vagabond who disappeared to Mexico. I’m not sure if he was a real or fictional character, but I loved the picture of him they portrayed as a man who had “ forty thousand whiskeys yet he never hurt his wife”.

Rounding off a great evening with their take on Moby’s “Trouble So Hard” it was time to head back out into the cold night air, but the energy of the evening helped put a spring in my step as I made my way to the underground. What a fun gig it had been!

You can catch “ The Orange Circus Band” next weekend at C2C Festival in London where they a performing at various outside stages throughout the weekend, go check them out if you love a hoe-down!

For further information go to theorangecircus.com