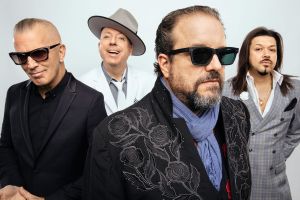 Raul Malo, Paul Deakin, Jerry Dale McFadden and Eddie Perez; the four names that make up…. The Mavericks! This neotraditional Country, Latin and Rockabilly influenced band are best known here in the UK for their hit single ‘Dance The Night Away’. On Tuesday 28th March they graced the stage of the IndigO2 in London and I was lucky enough to be part of the audience for their exciting performance!

It is always interesting for me to review a show when, I will admit, I only know one song from a band! Sometimes it doesn’t end well…. But this was not one of those times!

The lights went down and over the speakers came the classical piece Orpheus In The Underworld by composer Jacques Offenbach… or known to me and you as… the Can Can! As the song came to a close on walked the Mavericks along with several additional band members and as Raul addressed the audience

They went straight into their first song and title track from their new album; Brand New Day. From the get go I knew this was going to be a fun evening as almost instantly they had the audience clapping away to the song! Followed by ‘Easy As It Seems’ another new track, this particular song inspired by last year’s presidential campaign!

‘Damned (If You Do)’ and ‘I Think Of You’ followed with no talking breaks in between. These guys meant business! They were here to play music and that is exactly what they were going to do! They weren’t wasting a second! As lead singer Raul took a moment to speak after the last song it was simply to encourage this attentive audience to go out and buy their new album!

The audience broke into applause as they headed into their next song ‘Back In Your Arms Again’. Up next? ‘All That Heaven Will Allow’, ‘Cryin’ Shame’, ‘All Over Again’, ‘Lucky One’, ‘I Will Be Yours’. At this point I was totally captivated by the whole event! From seeing the looks on the audiences faces during each song to watching the energy on stage!

The guitarist, Eddie Perez, could not keep still! For me he stole the limelight from Raul a lot of the time as he bounced around the stage whilst playing his guitar solos. There was certainly an element of flamboyance in the performance from everyone on stage with the keyboardist, Jerry McFadden, took to a solo and at one point began playing with his feet! In their backing band they had a saxophone, trumpet and also accordion, an instrument that, for me, really brought that Mariachi feel to the set! Between these three players they also took it in turn to play the tambourine when they were available on various songs. Their set seemed to fly by as they seemed to wrap it up when they played the song that I had been waiting to hear, ‘Dance The Night Away’! As they exited the stage I was surprised that their set had not been longer but nonetheless I had thoroughly enjoyed the evening and was excited to hear what they would play for their encore.

Well their encore turned into more of a second half as they played another 6 songs; a couple of the tracks having some long instrumental sections. They also played a cover of Pink Floyd’s – Us And Them.

With their energetic performance, the catchy songs, the clear polished, rehearsed instrumentals… the show was fantastic! My only disappointment is that I didn’t know more of their songs! Though many I could sing along to after a short while as they were easy to catch on with which was great both for me and anyone else there that may have been less familiar with their music. Whether you are someone who enjoys a great performance, just to listen to some great musicians or you want something to simply sing along to… These guys check all of those boxes!

Their new album ‘Brand New Day’ was released yesterday (March 31st) and I have my copy on it’s way already! Head out and buy the album, learn every song (including their back catalogue) and then get yourself ready for June 22nd because the band will be back with a show in Gateshead!