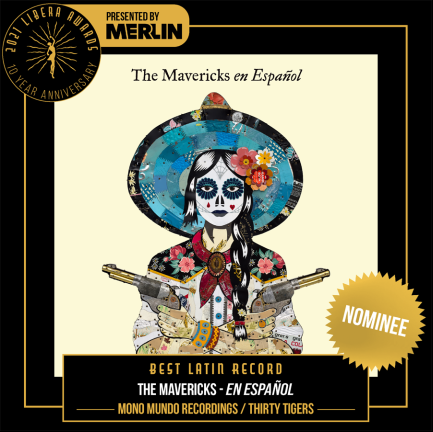 En Español the chart-topping release by the Americana group The Mavericks received a nomination for the Best Latin Album of the Year for the 2021 A2IM Libera Awards. This honor has resulted in The Mavericks having one of the best independent releases of the year in the Latin Music genre. The honors for En Español also include debuting at number one on Billboard’s Latin Pop Album as well as simultaneously being in the top 10 on both the Latin and Americana charts. The band is comprised of Raul Malo (vocals and guitar), Paul Deakin (drums), Jerry Dale McFadden (keyboards and vocals), and Eddie Perez (guitar and vocals) and have been together for three decades. En Español is produced by Raul Malo and their longtime collaborator Niko Bolas and has twelve Spanish tracks. The band hopes that the album can bring common ground between Latin and Americana music by expanding listeners’ minds and melting hearts. The Mavericks are also preparing for a return to live music with live and unplugged shows at Austin’s ACL Live from April 8th to the 10th.