Born of Cuban-American roots in Miami, the GRAMMY-winning Country, Americana, and Tejano-infused Rock & Roll band come full circle. On “En Español”, The Mavericks mesh their uplifting eclecticism with a collection of their own Spanish language originals, and classic Latin tracks from which they drew inspiration.

“The Mavericks are capable of doing everything from rock & roll to Tex-Mex to jazz and soul… a breathtaking collective that can do anything – everything, really – better than the rest. …The Latin-fused big band sound of the … wildly eclectic group …is an earthy but globetrotting place where Tex-Mex, Western swing and Miami music all intersect…Just try not to get up and dance.” – Rolling Stone 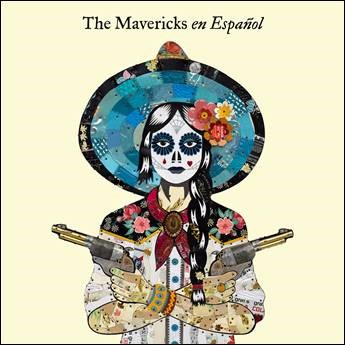 Following the recent success of their extensive 30th anniversary world tour, the genre-bending, multi-platinum selling Mavericks are adding a new career milestone, while also coming full-circle to their early Miami roots with the band’s first Spanish language / Latin music album. Set to be released on August 21st, “En Español” will present five new songs written in Spanish, plus their unique take on seven classic tracks that long inspired the GRAMMY, ACM, and CMA-award winners to make Cuban, Tejano/Tex-Mex and Latin rhythms from their heritage such an integral part of the Mavericks’ distinctive style and the foundation of earlier projects such as the “Havana Time Machine” documentary with PBS. The carefully chosen covers include songs by Juan Gabriel, Julio Iglesias, Andrea Bocelli, Enrique Iglesias, and more.

This is the record I’ve been wanting the Mavericks to make for a very long time. I’m a first generation Cuban-American, and some of these songs are songs my family would play and sing on weekends at family parties and get-togethers. But it’s not all nostalgia either. There are plenty of new original songs that put this record squarely in the moment for us.

– Raul Malo of The Mavericks

3.No Vale La Pena / “It’s Not Really Worth It” (Writer: Alberto Aguilera Valadez)

9.Sabor A Mí / “Taste of Me” (Writer: Alvaro Carrillo Alarcón)

STAY CONNECTED WITH THE MAVERICKS:

NEWS: Jeannie Seely Celebrates Her 80th Birthday With The Release...