The Henningsens – World’s On Fire

Album Review and why it is a ‘must-have’ album 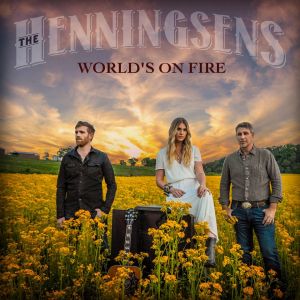 I am going to start this off by saying that World’s On Fire is one of the best albums that I have heard in a long time. It is modern country at its best, without any trace of Pop!

The Henningsens are a father, son, daughter Country Music trio, from Illinois. The Henningsens may be on their first album but have a long list of credits on other well known Country artist’s albums. They’re most recognised for the work they have done with The Band Perry on the singles You Lie and All Your Life, which featured on their debut album.

Other tracks they have written with The Band Perry include Night Gone Wasted, I Saw A Light, I’m A Keeper, Back To Me Without You, and End Of Time. They also wrote Love It Out Loud for Wynonna Judd; Alone, for Sara Evans; Billy Currington’s Drinkin’ Town With A Football Problem and Six Gold Coins by Highway 101.

The Henningsens were originally signed with Arista Nashville – a division of Sony Music Nashville – and released their first four-track EP American Beautiful in 2013, from which the title track was issued as a single. In 2015, The Henningsens announced their split from Sony, which was sad to hear, but then upon hearing they were going to release an album regardless, everything was good again.

There is so much to love about this album; it’s everything that got me into Country Music – before the modern sound was turned into a Pop sound. I loved their EP, but World’s On Fire is of such a higher standard that I would put them up there with the likes of Lady Antebellum. There is most certainly a gap in the market for Country groups at the moment. Whilst bands like Little Big Town are currently and quite deservedly at the top of their game, their sound is very different – so comparing them would be pointless. However with the departure of Rachel Rienert from Gloriana – and The Band Perry changing genres – there is now room for The Henningsens to take their place.

The Henningsens all take a turn on lead vocals, although Clara takes the lead on most songs. They all have such a modern – Southern sound that takes you straight into the heart of Nashville. This album is refreshingly exciting and there’s enough variety to have something for everyone.

There are so many stand out songs on this album, but the songs that really give me that rare chilling feeling when you just fall in love with a song and play it over and over again, are the title track World’s On Fire, Hank (Rolling in My Grave) and There’s A Line.

World’s On Fire – starts off with a sound similar to The Civil Wars. Its melodic, haunting,  folk intro flows into a much stronger, more powerful chorus. Clara takes the lead on this song and her vocal range and tone are flawless. I love everything about it.

Hank (Rolling In My Grave) – Brian Henningsen (Dad) takes the lead vocal on this one. It’s a song I could see easily being cut by Tim McGraw, as it’s his style completely. I really hope  it gets released as a single because it definitely needs to be heard. It is a slow tempo song with a rock – folk sound to it. Brian’s voice is so well suited to this track – he has a lovely country tone to his voice which you do not hear from many Country artists these days. It also has lovely lyrics which are very interesting.

There’s A line – this song is very much like the material Lady Antebellum used to produce on their earlier albums such as Need You Now. Clara is back on lead vocal with another slow tempo song which has beautiful vocals and lovely harmonies during the chorus. This is also very single-worthy.

All the songs are great in their own right, with some ballads, like Texas Is A Woman, Golden and Why I Farm – and a few very modern Country songs: Airstreamin’, Sugar Rush and  Love You Till The End – which has an element of The Band Perry (not surprising, as The Henningsens often wrote songs for and with them, as I already mentioned).

Other songs include Country Cool – where Aaron (son) takes the lead vocal and is a nice fun track about a girl who, as the title says, makes ‘Country’ cool – and then there is Hometown Girl – a song about leaving your hometown to make it in the big city. This has a very pretty chorus, but is probably my least favourite track on the album. Also on the album is a Country dance track Like No One’s Watching and a feminist vibed very Country track – Like A Girl.

There is one very traditional country song – Jesus Or A Bullet – which has all the key country instruments and vocal riffs. This is a song that I can imagine would be perfect to see live at a show like The Grand Ole Opry.

I really hope that The Henningsens get the recognition they deserve because this album is worth being in the spotlight – and whilst I say it has similar stylings to Lady Antebellum, it is actually a lot better. This album exceeded my expectations and I wish its charting journey every success. The Henningsens are a ‘one to watch’ trio so make sure you go and check them out for yourselves.