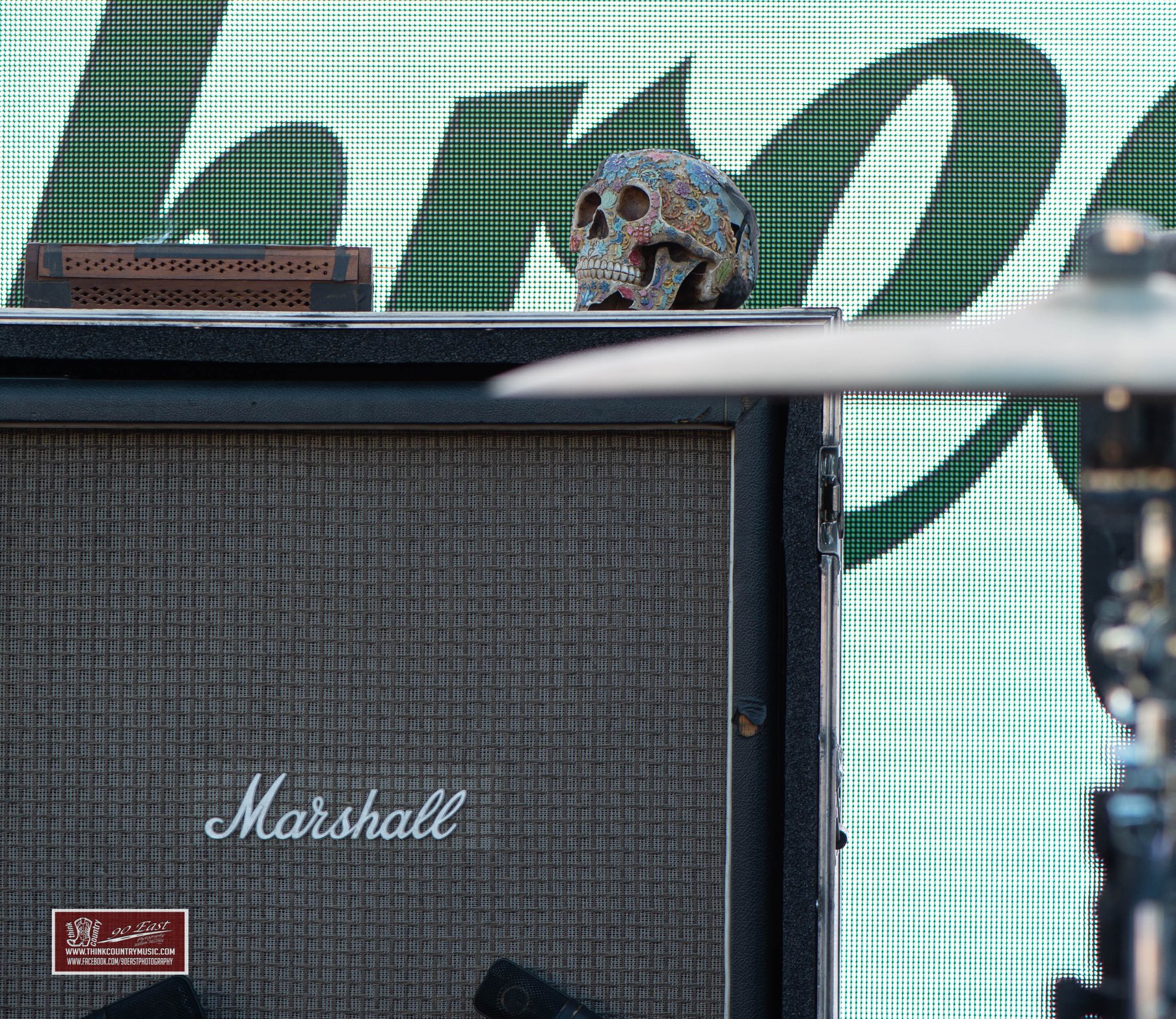 It’s no secret that Think Country loves The Cadillac Three.  We’ve been on board with this trio of long hairs for years now and it would take an act of God to knock us off their bandwagon and even that might not work.  We’re diehards.

I could list the reasons we’re such big fans but that would take forever.  It might just be easier to say that these guys know where they come from and no matter how successful they become, they’ll never forget who they are and who their supporters are.  I could say that about a lot of artists and bands, but only The Cadillac Three truly connect with their fans in a way that’s so unique and so authentic it has to be witnessed to be believed.  They aren’t just one guy that appreciates his fan base in a special way, they’re three guys, Jaren Johnson (guitar, lead vocals), Kelby Ray (lap steel) and Neil Mason (drums) that completely “get it”. It’s the weirdest, coolest thing ever.

Proof of this fan appreciation happens all the time.  Most recently what did they do? They threw a Pop Up Show, seemingly out of nowhere, on a Wednesday afternoon in October.  It was held at the new Yee-Haw Brewing Company in Nashville, to showcase some of the songs from their upcoming album, Country Fuzz.  The album releases February 7, 2020, and is available for pre-order now.  It can also be pre-saved on Spotify.   If you pre-order or pre-save, you automatically get yourself a few songs right away.  Not a bad deal.  The show was, at first, supposed to be for members of the media, but the rumor I heard is, because this band is so grounded, they decided that wasn’t right.  Why should the media be the only ones to hear these new songs when the fans are their most important supporters? So, they opened it up to everyone. Did the fans show up? They sure did. 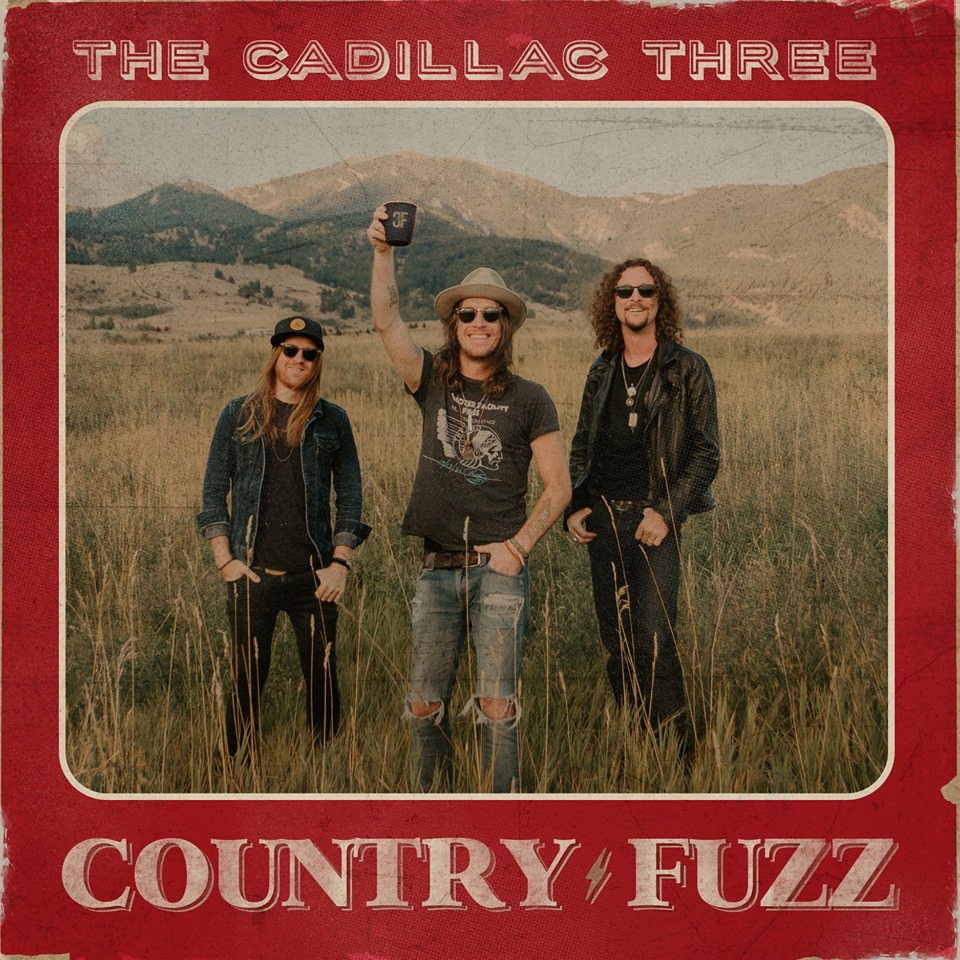 Image courtesy of The Cadillac Three

The Cadillac Three played the 30-minute set with all new songs except for one, and because I was trying to do a few things at once, I didn’t take notes on all the songs, but I’m sure fans will correct me if I’m wrong on anything.  I know for sure they closed with “Peace, Love & Dixie” though. In any event, like an Oreo cookie, it was the stuff in the middle that really counted at the Pop Up Show, the new material. Songs fans have been chomping at the bit for, and TC3 didn’t let them down.

Keep in mind, this new record is going to have a whopping 16 tracks!  That’s a lot. These boys had 30 minutes to squeeze in as many songs as they could in between a couple the crowd already knew by heart, and just like the band might say, “dang, if they didn’t!”

Guitarist and lead vocalist Jaren Johnston welcomed everyone in his usual manner, with “no filter” (that quote comes from Jerry Johnston, Jaren’s father, who I’ll talk more about in a minute), using some language that I’d love to print because I found it amusing (and for historical accuracy, of course), but I’ll refrain, just so I don’t have to deal with hate mail.   I will, however, preface the following video with a warning.  If you’re watching with young children, or those that are easily offended by adult language (maybe that’s even you), it may not be appropriate for all audiences.  If you can handle this kind of thing, jump right in.  This is the “no filter” that Jerry was talking about, followed by a couple of The Cadillac Three’s new tunes.  See what you think.  I gave them both a thumbs up.

I will mention that he told the crowd the band was going to play some songs from their upcoming album, and he hoped everyone liked it, “but if not, there’s the door”, as he gestured toward the exit.  Rather than offend anyone, it elicited cheers. That’s how things roll at a TC3 show. It’s all very real. As real as the ground you’re standing on, even if you’re standing on synthetic turf, which I believe is what was beneath our feet in the courtyard of the Yee-Haw Brewing Company. Let’s assume there was dirt underneath that.  Real. Gritty. 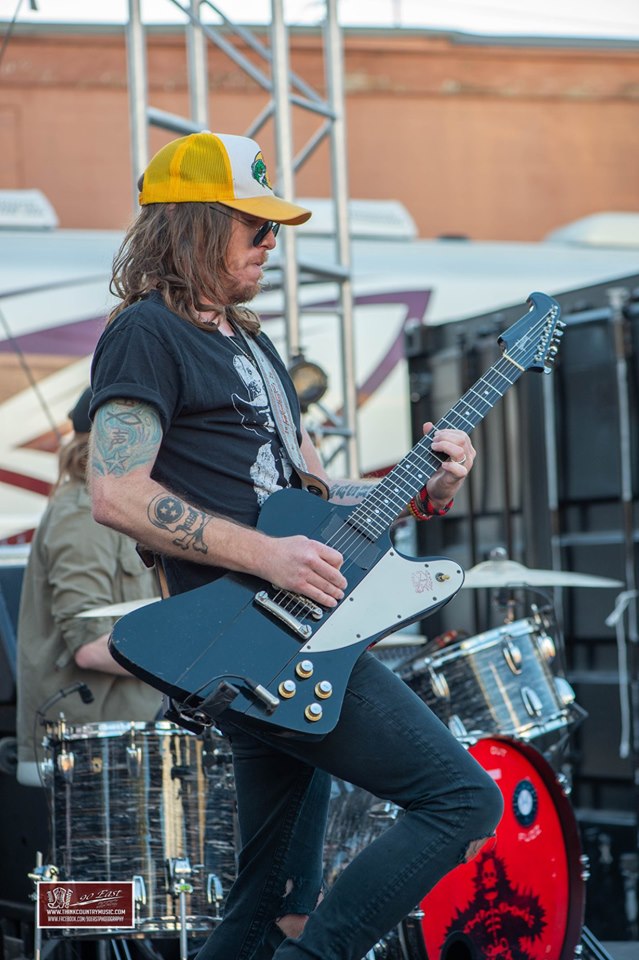 Some of the songs the band ran through off the new album were “Heat”, “All the Makin’s of a Saturday Night”, “Slow Rollin’”, “Back Home” and “Blue El Camino”.  They also played “Whiskey and Smoke” and “Hard Out Here” which will be on the new record but the band has been playing them on the road for a year or so now.  I didn’t see one single person move from their spot during the entire set, unless of course it was to inch up a little bit closer. Fans were completely mesmerized by every number. This is their band.  In fact, it would be wrong not to mention that the TC3 Drinking Club was well-represented at the Pop Up Show as well. Several members of the club were in attendance, some with items they wanted to have the band autograph.  That’s something that The Cadillac Three can almost always be depended on for, meeting with fans after shows. This is another reason fans are so devoted to them, because the band, in return, is so devoted to them. 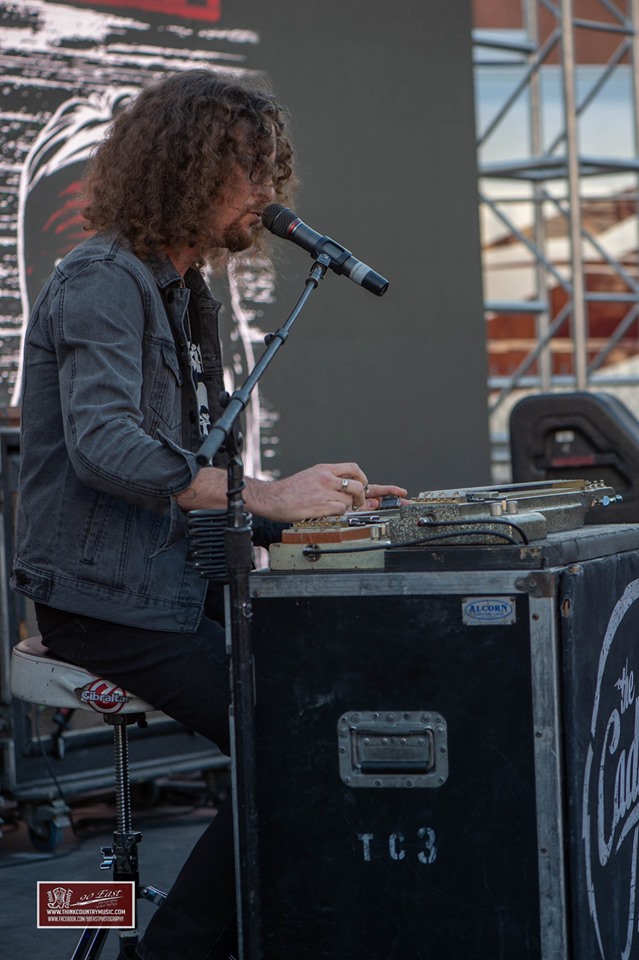 The TC3 Drinking Club is, without question, the most impressive fan group I can think of.  I see a lot of them, but none that are as cohesive, as well-run and devout as the TC3 Drinking Club.  What makes them most astounding is their founder, Kay Ford. Kay is a no-nonsense fan group leader. She runs it like a machine.  If something that shouldn’t be there sneaks in, like a human net, she catches it and releases it into the wild of cyberland where it belongs.  If it isn’t directly related to The Cadillac Three, away it goes. 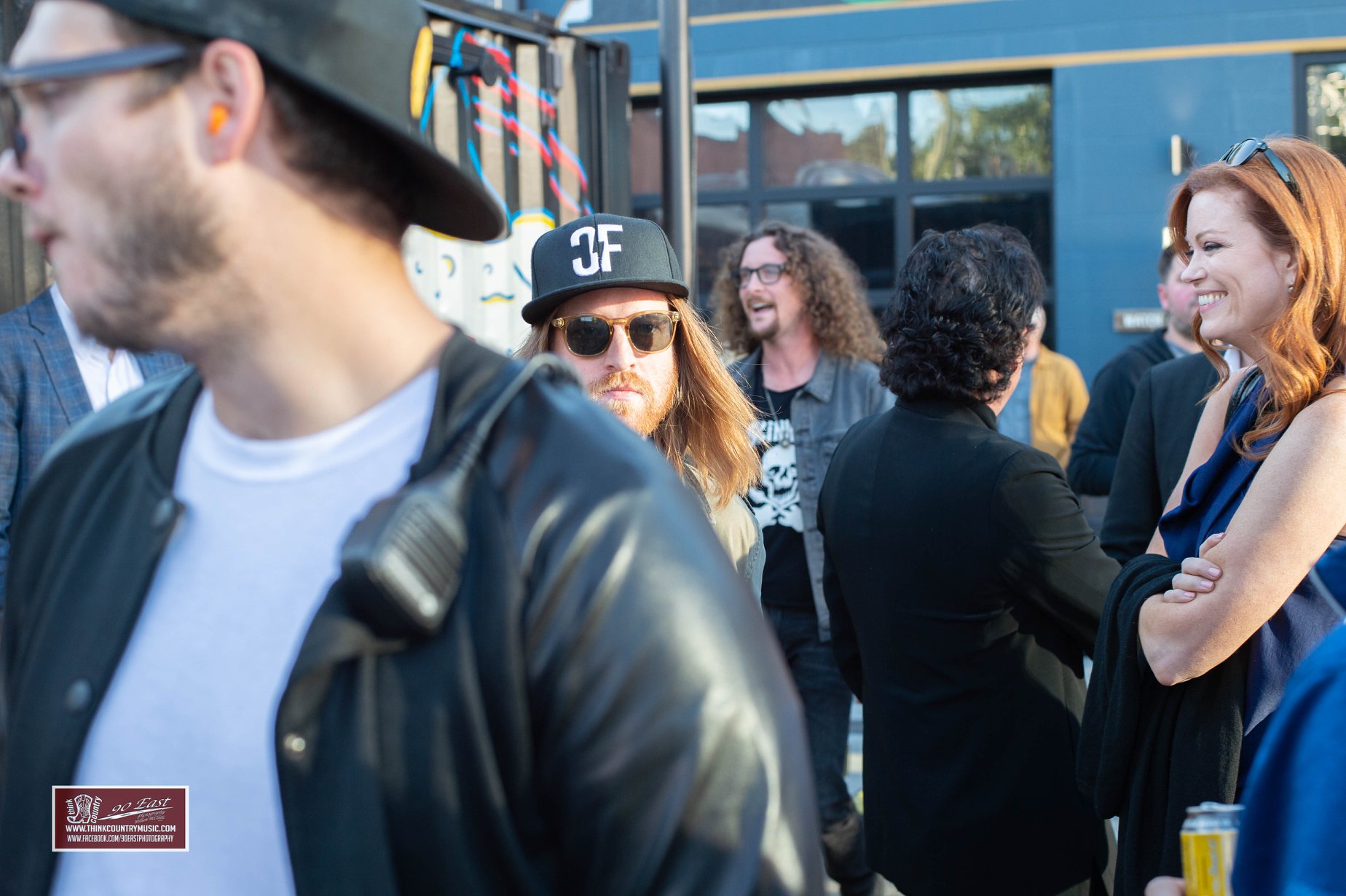 She knows what’s going on in the group, all while holding down a job and a regular life.  She’s not a crazy fan girl, she’s a low key woman that happens to really enjoy this band.  She’s a rock star of a fan group leader. I tell her that she needs to someday be in the Musicians Hall of Fame & Museum in a new category: Fan Group Founder.  She has created the most ingenious fan group I’ve ever encountered. She not only steadily brings in new followers to this group, she has the support of the band’s label and its management.  That’s unheard of for a self-run fan group. That’s how brilliant she is and how tight this group is. If you love The Cadillac Three and are not yet a member of the TC3 Drinking Club, definitely get yourself in, and this might be giving away a surprise, but why not?  Look for a feature on Kay Ford and the TC3 Drinking Club in early 2020, just in time for the release of Country Fuzz, on Think Country’s NASHVILLE PEOPLE series. 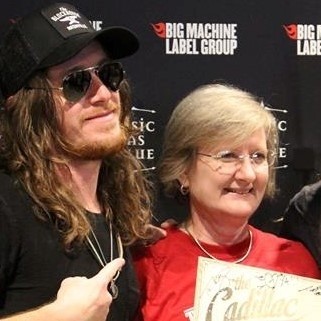 The show was fantastic.  It was a full 30-minute power-packed fun fest.  Some may say, “they don’t sound country”. Well, guess what?  That’s just an opinion. Country comes in many different forms.  The Cadillac Three is just another one of those forms. They are country with a turbulent edge, and I’ll say it again.  I’ve turned more of my rock fans into country fans via this band. You can’t take a person who “hates” country to a Vince Gill show and expect them to change their mind.  Take them to see The Cadillac Three and see what happens. They’re a gateway band and there’s no rehab program once someone’s hooked. 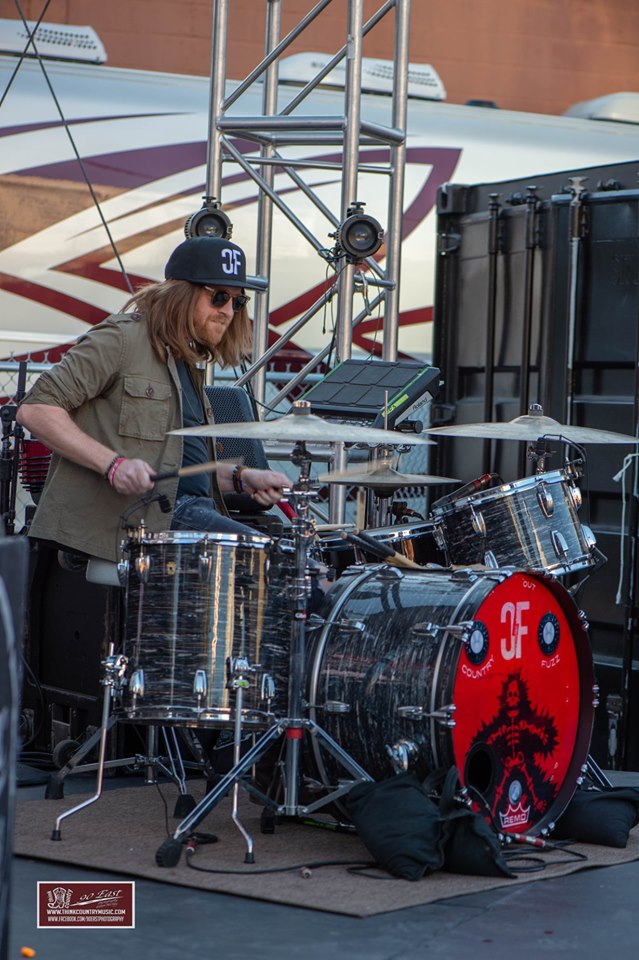 As for Jerry Johnston, I promised you I’d tell you about him later, and I will.  He’s a great guy. We’ve run into him at shows several times. This one was no different.  Jaren Johnston is a brilliant musician and songwriter. He’s written songs for many artists in Nashville, as well as for his own band.  He has long hair and he’s a little wild. His dad, well, he doesn’t have long hair.  He’s your average looking guy and he’s friendly. He’s a husband, father and grandfather. He’s hilarious. His line of the day for October 23, 2019?  “My son has no filter, none. Me? I’m all filter, all the time. We couldn’t be more different. I wish he had more of a filter, but what can I do?” My response?  “Yeah, well, does he support himself and his family?” He replied, “Yes, that, he does, so I can’t complain.” He smiled and admitted he was very proud of his son. 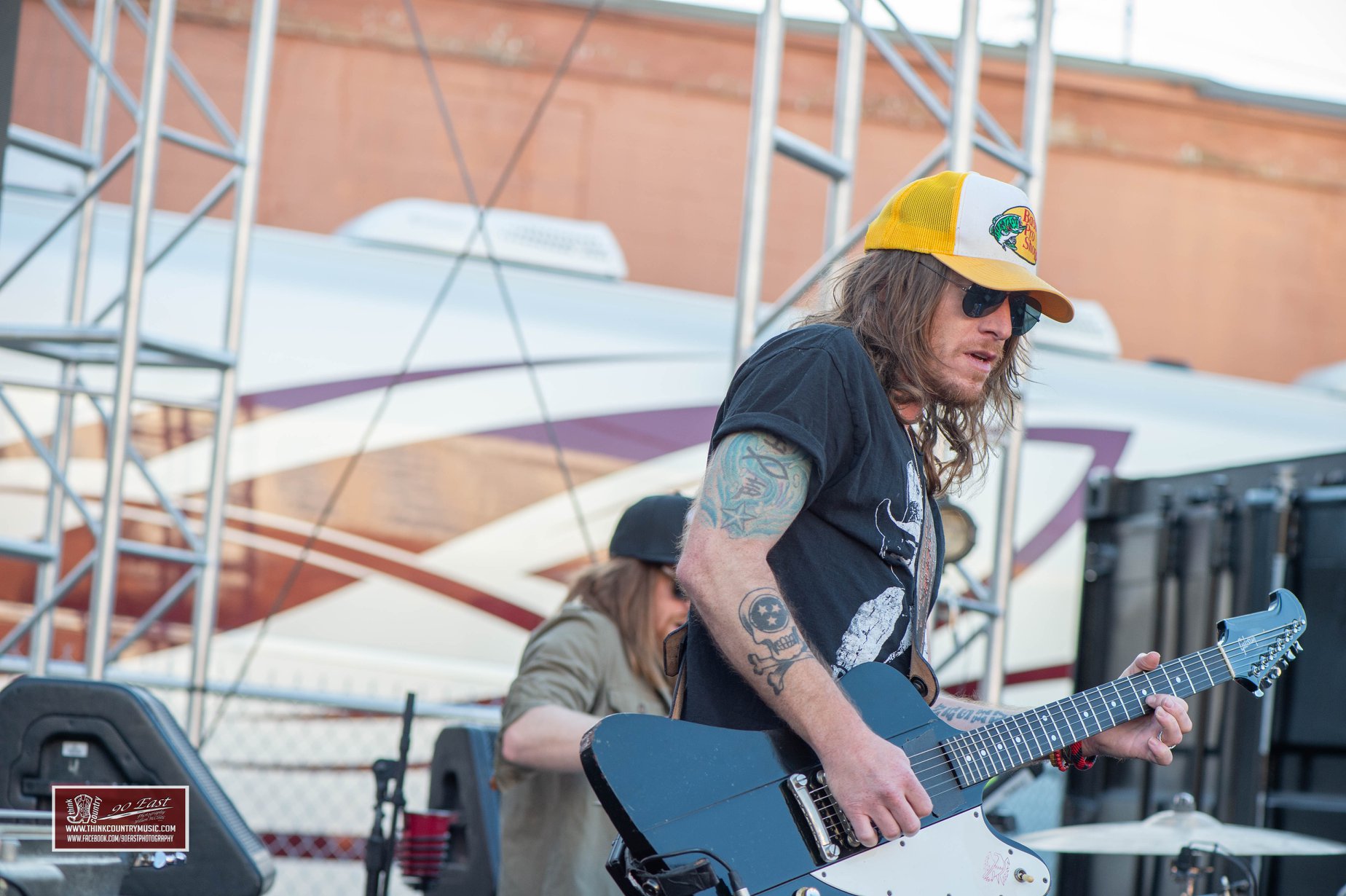 So, for every F-bomb Jaren Johnston throws out, for every mention of smoking substances not-yet-legal in Tennessee and whatever other off-color remarks he might make in public, he has a father that’s mighty proud of him in the end.  He’s talented and he pays his own way, supporting himself, a wife and young son. I always enjoy speaking with Jerry. He’s a great conversationalist. We chatted about Monte Carlo and pampered dogs and a host of other oddities, which was a lot of fun.  The Johnston family, in general, are very good people. I enjoy how proud they are of Jaren and I marvel at how different they are from him. That’s really cool stuff.

I was able to quickly say hello to Kelby after the show.  I didn’t get to speak with Jaren or Neil as they were swamped with fans and media.  That was fine. The show was a really good sampling of what’s to come with Country Fuzz.  I believe I heard it was going to be a bit “funky”, and I’ll go with that.  There’s definitely some funkiness to a couple of the songs, and “Heat”, now there’s a song with a cool groove that’s something new for the band.  I’d say “Slow Rollin’” is another one that strikes me as different, but fits these guys like a glove. I’m excited for all of it. February, for once, can’t come soon enough.  I say that because that’s my birthday month. I’m usually happy for February to stay as far away as possible. This year, bring it on!

The Cadillac Three can be found:

Adam Warner Reveals His Strengths at Industry Showcase in Nashvil...