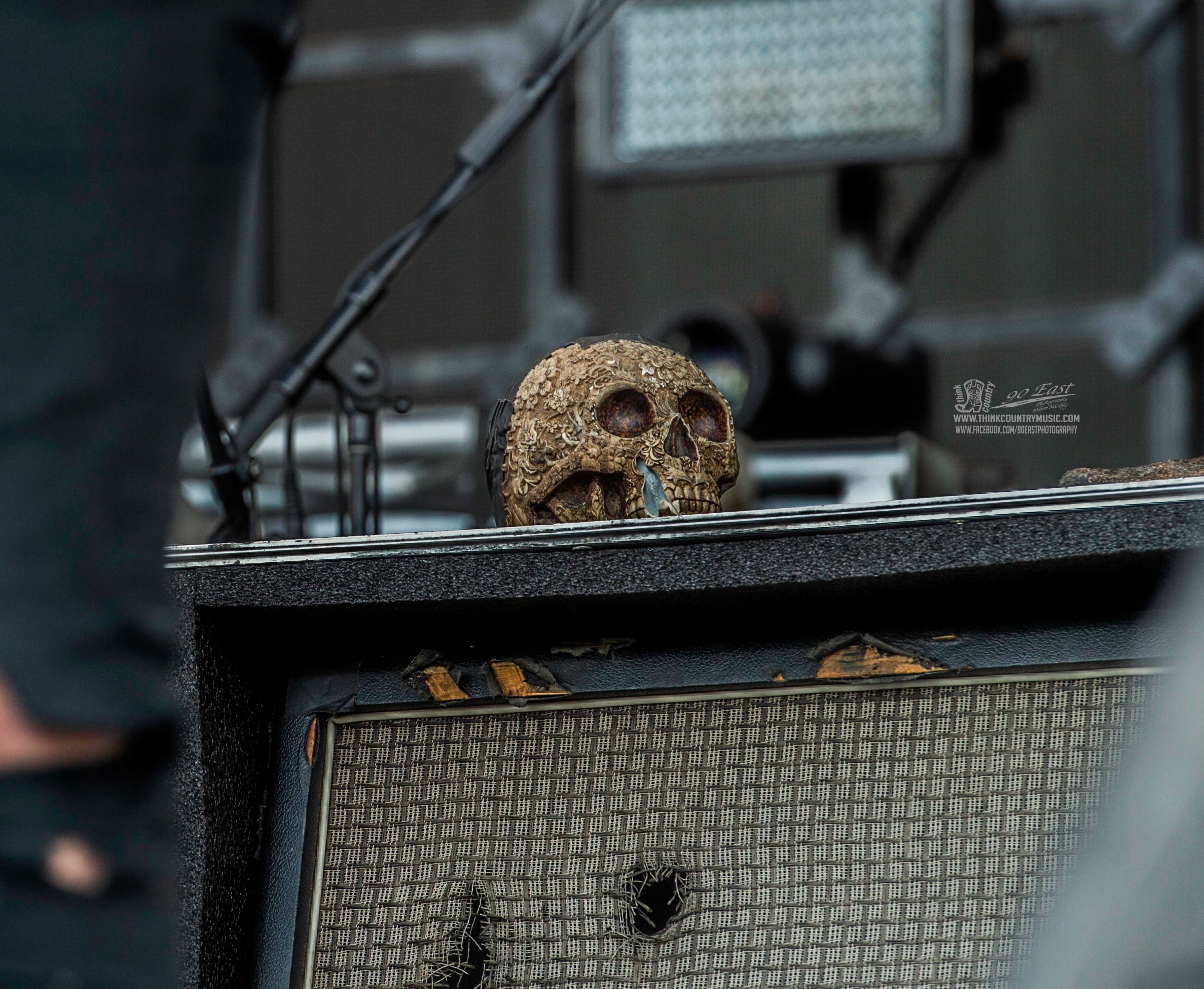 I’ve seen The Cadillac Three everywhere from Buffalo, New York to the hallowed stage of The Ryman Auditorium, and now, Louisville, Kentucky, and no matter where this band plays, I’m convinced they can’t and won’t ever fail.  I chose my pick for best overall performance at Hometown Rising and they won. That’s all.

Oh, I’m supposed to write more?  Well, in that case, I guess it’s probably good I took notes because I could have easily been caught up in the party that The Cadillac Three brings every time they play a show.  As a matter of fact, for a three-piece band with no side musicians, it’s incredible just how much energy flies off the stage while generating a good deal of quality music at the same time.  I’m not sure when the term “power trio” first came about, but I know it was long before The Cadillac Three came along, and whoever coined it never could have imagined what would come down the pike in the future in the form of Jaren Johnston, Kelby Ray Caldwell and Neil Mason.  This, my friends, is the epitome of a power trio.

It was a hot one at the Hometown Rising Festival in Louisville, but nothing Mother Nature could dish up would be hotter than TC3’s set.  As it was a festival and not a full show, it was an abbreviated set, but they managed to touch on plenty of fan favorites. They played in the late afternoon on Saturday, before crowds became too heavy, which was nice, giving fans a bit of elbow room to enjoy the show.

Looking like a true patriot, in a red, white and blue tank top and wielding his well-worn red, white and blue guitar, lead singer, Jaren Johnston let the Kentucky audience know that although he was there to give them what they came for, his heart still belonged to “Tennessee”, because that was the song they kicked the show off with.  Although I was shuffled around a bit immediately after they got started and missed most of the first and second songs, I could hear them, and they sounded as good as ever. 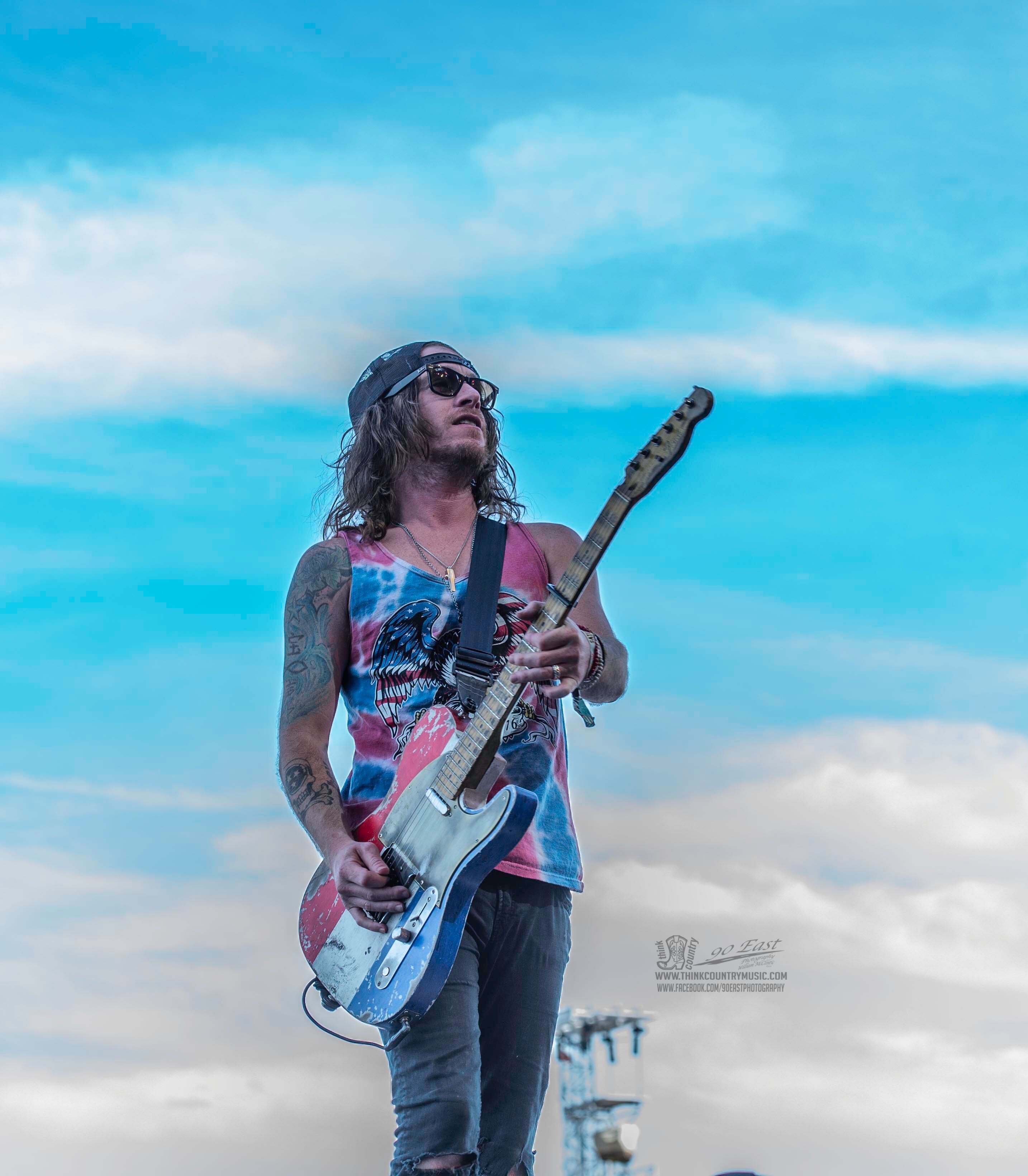 I was more settled in right around the time the band jumped in to one of their southern anthems, “Peace, Love & Dixie”, where I noticed that Johnston had switched over to a fluorescent yellow and green guitar.  Make no mistake, this man owns a lot of guitars and he changes them out frequently during a show. If you’re a gear lover, particularly when it comes to guitars, you’ll want to see The Cadillac Three, just to see all the amazing toys that emerge from Johnston’s road collection.

Yes, these three longhairs from Tennessee love their home state and they aren’t afraid to say it or sing it out loud, but they’re also very aware of where they are at any given moment too.  While performing “Tennessee Mojo”, Johnston pulled a quick switch with the lyrics at the end, replacing, “Tennessee Mojo” with “Kentucky Mojo”. That left what was undoubtedly a crowd dominated by fans from Kentucky happy.  They caught that and they cheered about it loudly.

“Any Bochephus fans out there?” asked Johnston, referring, of course, to Hank Williams, Jr.  Amid a lot of hollering back indicating that there were, the trio began playing “Hank & Jesus” from the Legacy album.  I took the time during this song to focus closely on Neil Mason.  This guy is a force on a drum kit. When there’s a three-piece band, there is absolutely no denying the importance of the drummer.  One mistake in timing and everybody is going to hear it. He doesn’t miss, and as solid as he is, he’s also so observant of what’s going on “out there”, as in the crowd, or so he seems to be.  He’s watching what’s going on everywhere. It’s almost as though he’s playing on autopilot and his eyes and ears are on the real job. It was quite fascinating. He isn’t taking himself too seriously either.  All the while keeping a perfect, steady rhythm, getting every hit where it needs to be and doing the job he’s hired to do, he’s got this little smile on his face and playing band lookout. How does he do all that?  The next time you see The Cadillac Three, or if it happens to be your first time, take at least one song and set your gaze on Mason. He’s an enigma! 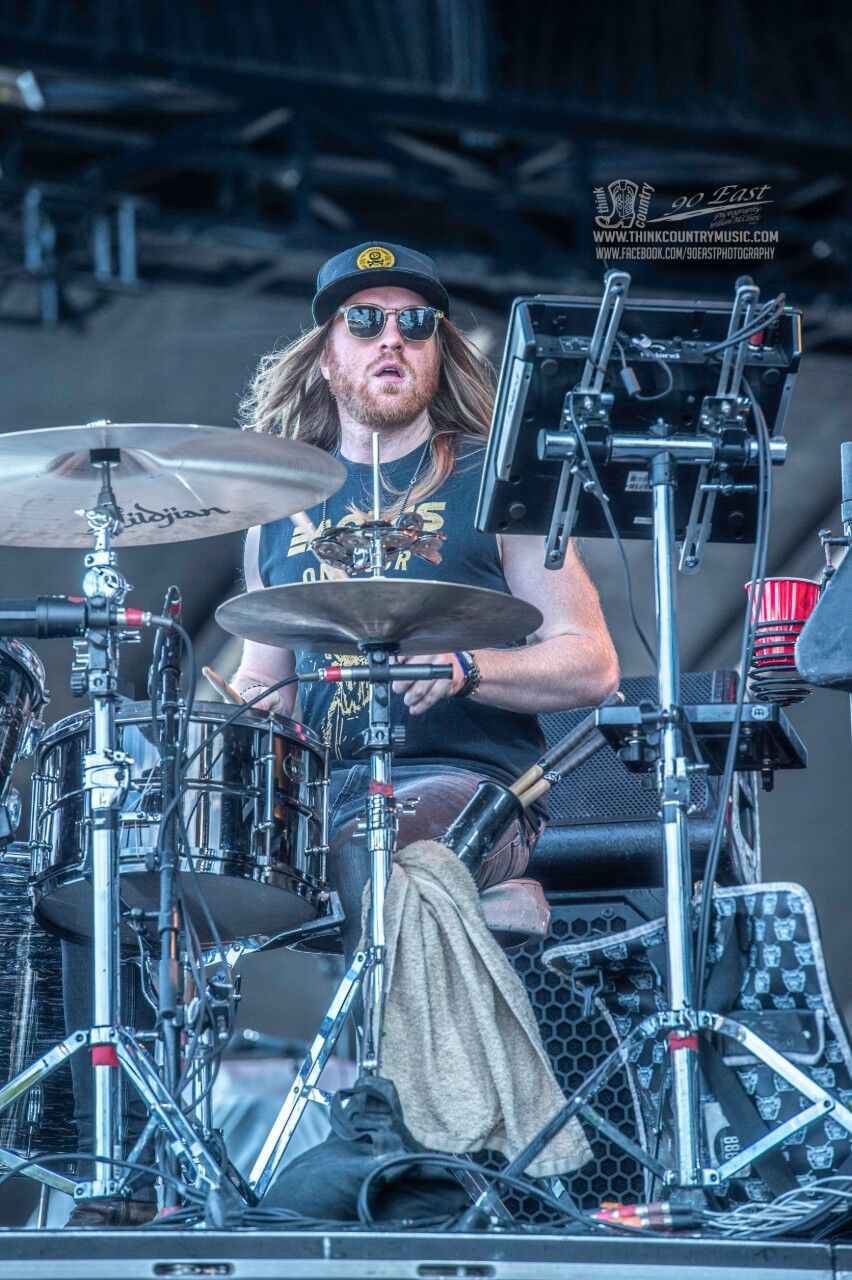 The one thing that can always be said for this band is they are patriotic and they love this country.  TC3 dedicated “Bury Me in My Boots” to our military. This song was done in the baddest of badass fashion, exactly what our United States Military members, past and present deserved.  If you have a rock and roll friend that needs a swift kick introduction to country, play them this. If it doesn’t rope ‘em in, leave ‘em right where they are. They don’t belong here on the dusty side of country.

Say what you will about well-polished, super glamorous artists, I’ll take these guys any day.  Kelby’s well-timed hair flips are oh, so special, always right on the beat. Nobody does synchronized hair flips like he does, nobody.  There was one such hair flip during “Bury Me in My Boots”, and it was unfortunate that video was not allowed. I would have loved to have included it here.  It could also be said that Kelby Ray Caldwell put the cool back into the lap steel, so cool in fact, that his style is unmatched by anyone else. The hair flips are just added swag. 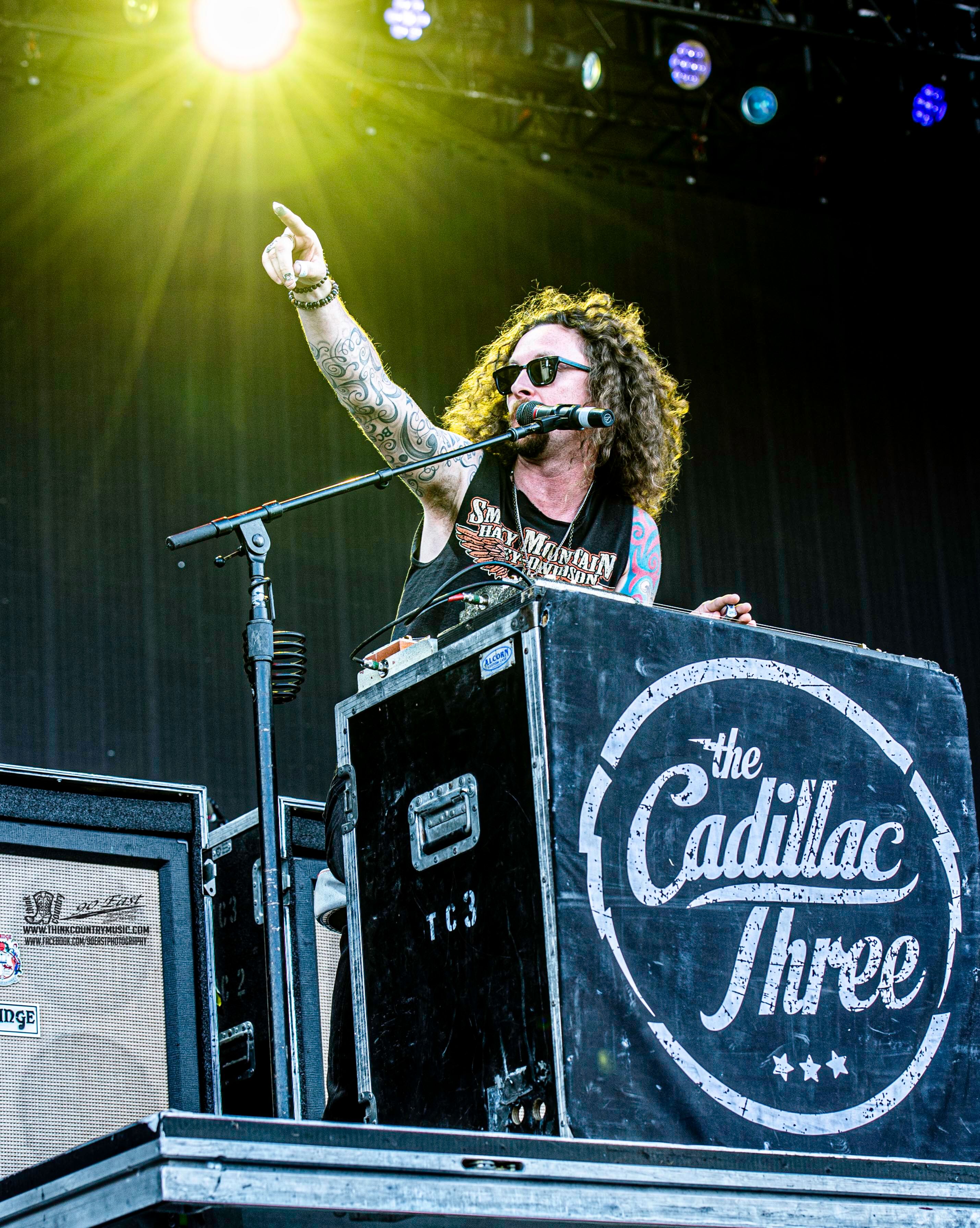 Johnston remarked that he had never seen The Steel Woods before.  “That’s some good shit. The second best band here,” he said with a laugh, proving once again, this little band from Nashville has a good sense of humor.  With that, they pulled into the final stretch, breaking out into their ballad, “White Lightning” and then the anthem to end all anthems, “The South”. Like good Kentucky bourbon, they found a perfect finish, smooth, yet full-bodied and lingering, until next time. 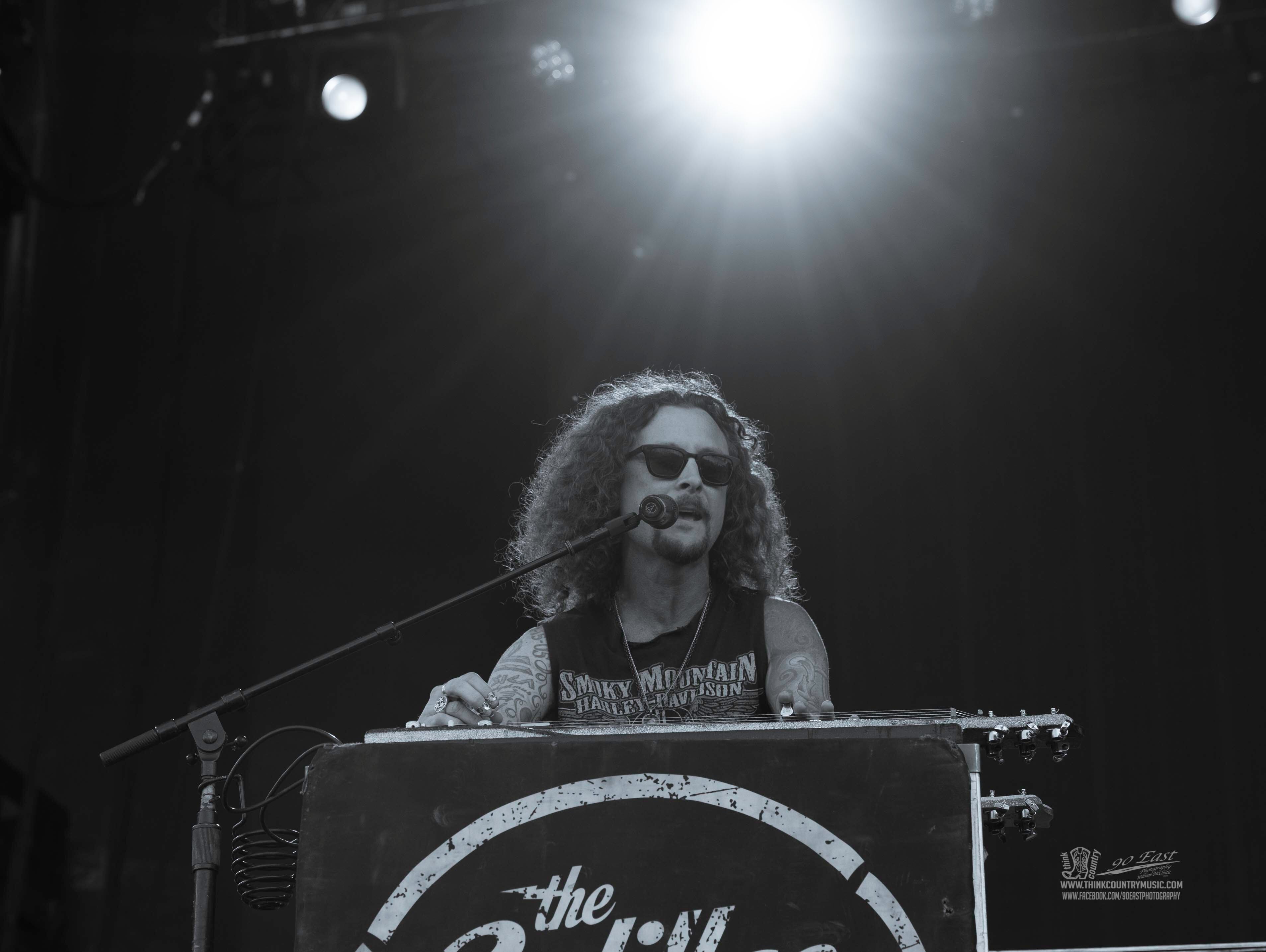 The Cadillac Three can be found: