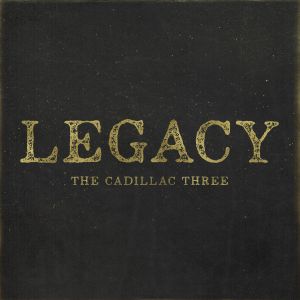 Legacy is the 3rd studio album from The Cadillac Three and each of the 11 tracks on this album have been co-written and produced by the band, childhood friends Jaren Johnston (vocals), Kelby Ray (lap steel guitar) & Neil Mason (percussion).

Cadillacin’s funky guitar, Kelby’s playful lap steel and Neil’s strong percussions, paired with Jaren’s unmistakeable southern drawl makes for one hell of a catchy, opening track and a glimpse of the vivacious live shows to come at the end of this year.

In the second track Tennessee, the yearning in Jaren’s voice as he longs to come home to his girl after being away for two weeks is unequivocally real & downright sexy; ‘Get out the whiskey girl and put that black dress on, I’m coming home to Tennessee…’

There’s a nod of approval for Sturgill Simpson in the song when Jaren sings that he needs to hear something real like those ‘sweet southern sounds’ on vinyl, an honest appreciation of authentic, modern country music.

The Cadillac Three don’t disappoint when it comes to subject matter and at the core of their writing the rock‘n’roll essence of whisky-soaked good times and a pretty woman are unchanged.  This is fully realised on current single Dang If We Didn’t, a serious three chord party tune with fantastic, singalong melodies. American Slang has a huge anthemic vibe to it and I can hear the percussion and hand-clapping ringing out in shows across the globe. Lori McKenna co-wrote on this song and her distinct vocals also feature on the sexy Love Me Like Liquor.

Hank & Jesus is a belter of a song that embodies the southern lifestyle that shaped TC3.  Kelby grew up on Hank and Jaren grew up with a mother who was a central part of their Southern Baptist church, singing in church on a Sunday morning. ‘I was baptised in a Whiskey fountain, thank Daddy for Hank, thank Momma for Jesus…between the vinyl and the Bible it was everything I ever needed’. I can totally relate to this song, coming from an Irish Catholic family with a perchance for many wild, music-filled party nights.

What has changed on this album however, is the propensity to evoke real-life emotions and a real sense of maturity.  Songs like Ain’t That Country and Hank & Jesus confirm this. Their song-writing has been transcended by the addition of genuine sentimental value, none more so than in the brutally honest title track, Legacy;

When I’m gone, my name carved in stone,
And that dash between the years, is all I left here
It won’t be songs and stages I sang on
Girl, as hall of fame as I wanna be
A lifetime you loving me, hell that’s a legacy.

This song is definitely one of the best written tracks I’ve heard on an album for a long time.  To go from good time, alcohol soaked party boys to such mature sensitivity is a true affirmation of their creativity and talent as songwriters, musicians and strength of character as new fathers, husbands and all-round ‘good guys’ of outlaw, rock’n’roll country.

The Cadillac Three are one of the most successful Southern Rock acts to tour in Europe – they opened for Aerosmith at Download in June this year and play sold out dates across Europe, but are still mainly unsuccessful in securing airtime on country radio across America. If anything, this album should be the one to change this travesty. Legacy makes it plain to see why TC3 fans love them as much as they do – cleverly crafted songs and a tight, fine-tuned trio of musicians and friends who enjoy their job as much as we do.