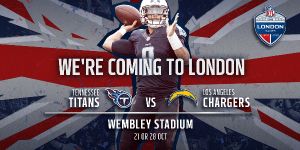 The National Football League on Thursday announced the Titans will face the Los Angeles Chargers at London’s Wembley Stadium during the month of October during the 2018 season.

The final date is still to be determined – it will either be in week seven or eight (Oct. 21 or 28) of the NFL season. This will be the first regular season game for the franchise at an overseas stadium. “We are excited as a franchise to be playing in London as part of the NFL’s International Series,” said Titans Controlling Owner Amy Adams Strunk. “There is a great relationship developing between Nashville and London with music being the common thread. We are looking forward to showcasing our team to the NFL fans in London and throughout Europe.

“Being asked to play overseas is a result of the success we have had over the last two years,” said Titans General Manager Jon Robinson. “We will be doing a lot of leg-work during this offseason to ensure we make that week as normal as possible for our team, but we are excited as an organization to be part of this game.”

The Titans were initially scheduled to play the Chargers in Los Angeles, so Tennessee will not be giving up one of its eight home games next season at Nissan Stadium.

The NFL launched the International Series in 2007, with a regular season game between Miami and the New York Giants at Wembley Stadium. Between 2007-17, there have now been 21 games played in London with 18 of the games played at Wembley and three played at Twickenham Stadium.

Also scheduled to play in London next season: Seahawks vs Raiders and Eagles vs Jaguars.

“We continue to be very excited by the growth of the NFL in the UK,” NFL Commissioner Roger Goodell said in a release. “The fans have demonstrated outstanding support and passion for the NFL over the past 11 seasons and we look forward to some great games in London this year. A key feature of our success is playing in iconic, world-renowned venues like Wembley and Twickenham, and we look forward to playing in what will be another incredible setting for NFL football at Tottenham’s new stadium.”

Ticketing details will be announced by NFL UK on January 18. Anyone interested in registering their interest in attending any of the games can do so at www.ticketmaster.com/nfl to ensure they receive all the latest information.