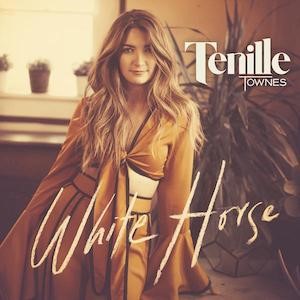 Emerging singer, songwriter and performer Tenille Townes’ new song, “White Horse” is out now, following a world exclusive first play on BBC Radio 2’s Country Show with Bob Harris on Thursday (28/2) – You can listen to the song for yourself HERE and can catch up on The Country Show with Bob Harris (which also featured some live tracks and Bob’s interview with Brett Eldredge) HERE

Written by Townes, Daniel Tashian and Jeremy Spillman, the song is the second track unveiled from Townes’ forthcoming debut album, produced by Jay Joyce and due later this year on Columbia Nashville. Of the song, Townes comments, “‘White Horse’ is a song about how love can look a little bit differently than we might expect it to. I think we grow up in our society completely surrounded by that fairy tale idea of what love should be, but maybe love is even bigger than that. I think it’s important to be open hearted and to push the boundaries of what society might build up in our expectations. I love that this song stands strongly in the idea that love isn’t always about the ivory towers and the roses.”

Already receiving widespread attention, Townes was recently named US radio network iHeartCountry’s next “On The Verge” artist. The program has proven instrumental in the development of such successful and highly credible artists such as Cam, Sam Hunt, Maren Morris, and Luke Combs. In celebration of this honour, Townes will perform on the iHeartCountry Festival stage in Austin, Texas on May 4th.

Townes is also one of Amazon Music’s “2019 Artists To Watch,” CMT’s “Next Women of Country,” iHeart Radio’s “Artists To Watch in 2019” and is included in The Bobby Bones Show’s “Class of 2019,” CMT’s “Listen Up” and the inaugural class of “Opry NextStage.” Moreover, Townes continues to garner widespread attention including recent critical praise at NPR Music, Rolling Stone, The Tennessean, Refinery29, Wide Open Country and Sounds Like Nashville.

Townes is currently on the road supporting Dierks Bentley as part of his extensive “Burning Man Tour.” The tour, which kicked off in Ontario in January, features performances across Canada and the U.S., including stops at Chicago’s Casino Amphitheater and Columbus’ Nationwide Arena among many others. Of her recent performance with Bentley at Nashville’s Bridgestone Arena, The Tennessean declares, “Country music’s new it girl Tenille Townes has one of the most distinct voices in country music.” Additionally, she will perform select dates this March in Australia as part of the international “CMA: Introducing Nashville” series. See below for complete tour details

Canadian-born and Nashville-based, Townes first made her public appearance at age nine alongside Shania Twain after being invited to sing on stage at a concert she attended with her parents. In addition to her work as a musician and songwriter, Townes remains committed to charitable causes including her own initiative, Big Hearts For Big Kids, which has raised over $1.5 million to date benefiting a youth shelter in her hometown of Grande Prairie, Alberta. More information on the charity can be found here.

TC in Conversation with Sarah Darling