During Country Music Week in London we were absolutely delighted to be a part of the first UK adventure for Tyler Rich as we got to spend some time hanging out hearing how things have changed since he moved from Northern California to Nashville. There is a lot of excitement on both sides of the Atlantic hearing people talk about this guy who when you see him live and realize how cool he is, you absolutely get it 100% and understand why there is so much anticipation of new music to follow his self titled EP last year. What is also evident  is that this is someone that has the potential to grow a fanbase in the UK very quickly as the reaction from the shows in London already had people crying out to know when we could expect him back which we completely echo and our chat here should tell you exactly why!

Tyler on how ‘The Difference’ came to be his first single:

We had all these songs that we loved but didn’t feel we had the first single which you have one shot at! That one shot at a first impression to radio and to everybody so we kinda went back to the drawing board thinking what does it need to be? What is it gonna sound like? What’s it gonna feel like? There isn’t an answer to that, you just feel it when you feel it so we went to all these pitch meetings where we tried things like a “pub crawl” pitch meeting where we took out a golf cart and you jump from every publisher on Music Row, spend 15/30 minutes with each one where you drank and listened to songs then move on to the next but that didn’t get us what we needed then all of a sudden I had a FIVE HOUR PITCH MEETING!!! 10 publishers came in and people would be like “hey here are our 10 favourite songs for you” but I didn’t have a single out so do they know what songs are for me? Then it’s all of a sudden hour 4, sitting there and this song starts. You’ve gotta think about how numb your ears are to music at this point, your just dead and I just heard the start of the melody.

The demo of that song was fairly skeletal compared to what we ended up doing with it and it was Devin Dawson singing it. I heard this swagger in his voice, hooked me in right away and I think I might have been puppy eared over maybe because I heard California for a second. Then I was like this is cool before you get to the ending of the hook there’s this difference between “love you” and “I Love You” when I was like FUCK! That’s the one,That hook and the lyrics! It’s funny because my wife who was my fiance at the time, always if I text her “love you” rather than “I Love You” she would always reply I Love You! So I text her saying I’ve got good news, I’ve got bad news: the good news is I’m pretty sure I’ve just found a hit but the bad news is you’ve been feeding me the lyrics to this song for like 2 years and I did not catch the bait!

Tyler on the journey that brought him from California to Nashville

It was me in LA, writing a bunch of music with a couple of producers and starting my solo project there. Devin and I were raised about 40 minutes apart, we have the same friends in Sacramento but we didn’t know each other until Nashville. My story is a little different than his but we played a similar kind of scene which is how we have the same friends. He moved to Nashville and went to school and  really became the songwriter and artist he is now where I started in California until it was peaking to the point where I was about to get deals or be in the right situation that was when I made the jump and moved. Basically I had been asked for some meetings or what not for people that had seen stuff I was doing online and when I went and visited it was like Dude, you got it! But you haven’t got it in California, you need to live in Nashville! Then 4 and a half years ago I made the jump.

Tyler on what is draws Cali based artists across to Nashville:

It’s the industry and the town itself! I went there and it was Saint Paddy’s day (very nice to write as he said this and hear an American NOT say it wrong as Patty’s Day) so I was there for like 4 days and it was just a shitshow, just this awesome party where the music is great and I was super single at the time too. Then I took meetings and realised that trying to do country music and not living in Nashville is like trying to be a politician and not living in DC! You have to, the entire industry is there, all the relationships are there and it’s just a big family!

Tyler Rich on latest track ‘Leave Her Wild’ as a good starting point for the rest of upcoming new music:

So ‘Leave Her Wild’ is from Sabina’s favourite quote from Atticus, you see girls posting and sharing it all the time! We were in the writer’s room one day and we were talking about a friend of ours that is never allowed to do anything because of her boyfriend. How she’s in this emotionally abusive relationship that is stifling. Sabina had been in one of those relationships, I had been in one of those relationships on the opposite side with a girl that didn’t understand the music industry. I was in trouble when I was playing shows and if my hand was on a shoulder during meet and greet, I was in trouble.

We kind of took all these ideas and we had been talking about how he makes her do a bunch of shit she never wants to do then my buddy Jon Nite said if you’re gonna make a woman do something, make her smile. We had had all these ideas of things you let her do and what she wants to be but we wrote it all down and it’s a really cool start to a song of “If you’re gonna love her, leave her wild” so we just wrote it not just about relationships but everything too. We have seen so much connection with that song like little girls and their dads, we start playing that song and more girls jump on shoulders then sing every word together. It’s just about loving someone for who they are without trying to change them!

Tyler on coming over to Europe:

I’ve been around a lot of Europe but have never been to the UK. My first trip was probably like 8 years ago, my best friend was an exchange student from Germany in high school and he’s been my best friend ever since. He lives in America now but is from Cologne where I’m playing next week and I’ve been there so many times that I know the place like the back of my hand. I would always start in Cologne for a few days with him then we’d venture out to a couple of countries kinda about once a year.

Tyler on what he has heard from fellow artists before his first trip over about the mythical beings that listen to songs they have never heard before who make up the UK audience:

I have heard it’s a very intent crowd, that guys over here are real music fans. They dig into the lyrics and the story. I’ve played a lot of crowds sometimes that just come to party, there’s nothing wrong with that, we love it when they come to party as that’s what we want but if they don’t know the song they’re just drinking at the back and hollering. Every person that I’ve ever talked to that’s played in the UK has said the crowds are just a dream.

and Tyler on his first impressions of the British Isles:

The weather here is my favourite weather, I love overcast, I love rain, I love that moody fall feeling and I love pubs. I fucking love fish and chips along with everything else about this place already! I only got in yesterday and I slept really well on the flight here from Detroit, slept about 6 or 7 hours straight then woke up and it was like 11am here. Then I went to sleep around 930 last night which is the earliest I have gone to bed in FOREVER. Then forced myself to stay in bed until 9am so I would be up, awake and on London time which I think I am! I’ve done a lot already, I tried to go to Buckingham Palace but The Queen is back so couldn’t go inside but saw outside and I try to walk as many places as I can when I’m in new cities. I walked like an hour total from where I’m staying in Marylebone down past the Palace and by Westminster Abbey then near the Eye so walked all around yesterday. Then today I went into Westminster Abbey because it was closed yesterday and into The Churchill War Rooms which was awesome!

(On a side note and as a heads up from me living in the capital, walking around London is so easy and is perfect in Autumn and a great way to take everything in as things are not as far apart as they look on the tube map. Also as someone that doesn’t really get excited by museums: The War Rooms is one of the things I would most recommend for anyone visiting London and even people living in the capital that have never visited before, even if you don’t think it will be your thing as it is absolutely fascinating) 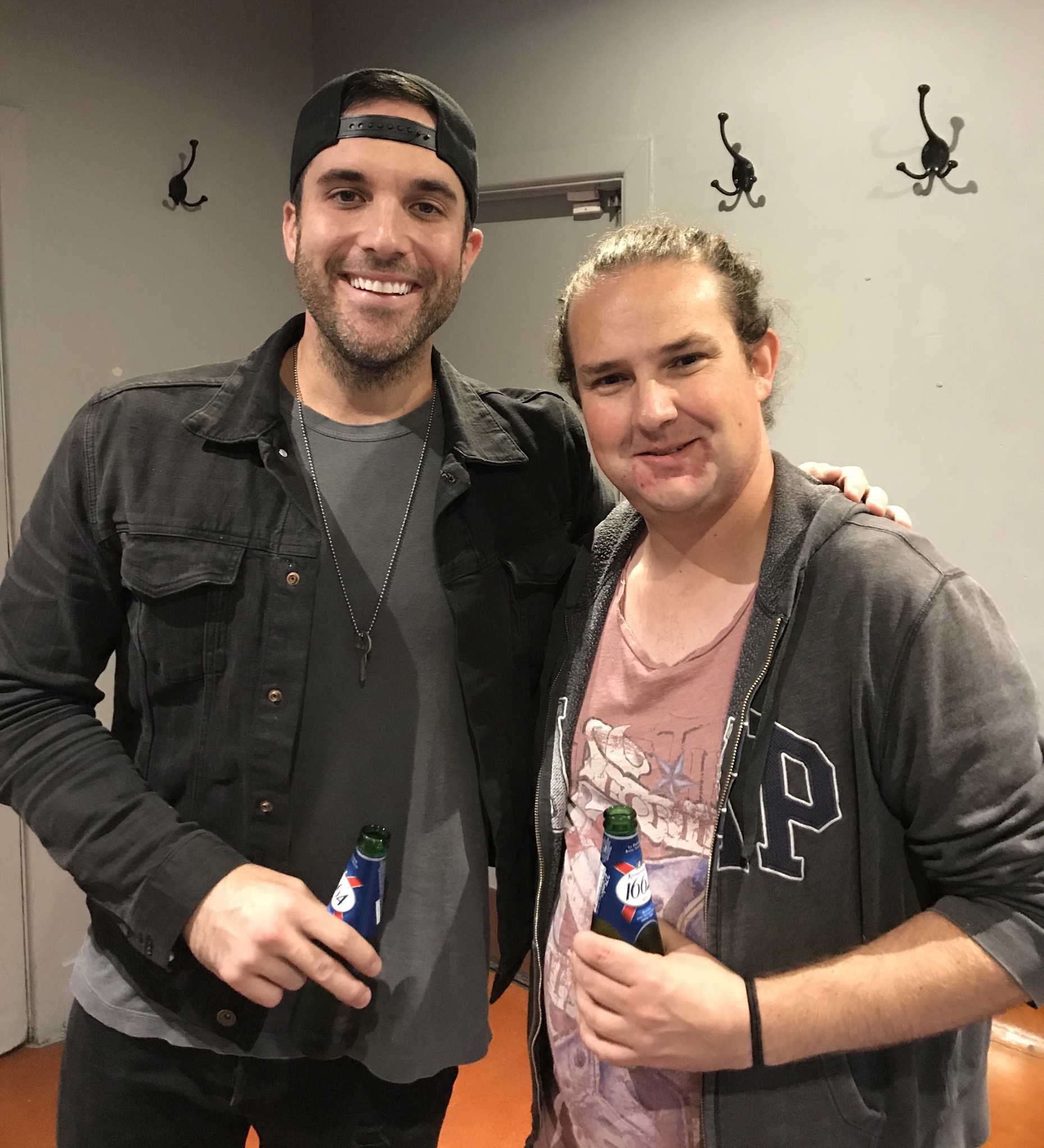 We are sure this will not be the last we see of Tyler Rich this side of the Atlantic and given the initial reception he received during shows with Striking Matches and at the Country Hits Radio Hub, he definitely gained a lot of news fans that hope we won’t be waiting too long. In the meantime fans on both sides of ocean can keep up to date with him on Twitter Instagram Facebook and his Website