The long time anticipated first UK tour from Arkansas native Joe Nichols is finally on the horizon as he makes his first trip to England and Ireland next month in September. This is a guy with 9 studio albums since 1996, which 4 of them were top 5 records including III which made the top 10 of the Billboard 200 all genre charts. These 9 albums have produced 14 top 20 hits (5 that went to number 1) which combined with being a multiple Grammy nominee, an ACM award, a CMA award plus the fact he has played shows with the like of Alan Jackson and recently with Garth Brooks at Mile High in Denver, CO it is no surprise that this is someone that fans in the UK have been crying out to have play shows on this side of the pond.

It’s taken a little bit! We kinda flirted with the idea for several years but for whatever reason it just didn’t work out. It feels good to be able to come over now and share with the fans of country music in the UK plus I’ve always wanted to go be a tourist in the country. I think I have the one day so I’ll do as much as I can, I don’t wanna waste the opportunity!

The tour also encompasses dates in Switzerland at the start of the run when he returns to play in Gstaad which is around 60 miles south of Bern. Nichols last played the annual festival in 2005 where he shared the bill with Deana Carter and John Michael Mongomery but returns this year to kick off his European tour on 20th and 21st September with full band performances on a lineup that also features Ashley McBryde, Rosanne Cash and Asleep At The Wheel which there is more information available HERE. The UK dates which will all be a much more acoustic setting begin 2 days later in Bristol and the tour concludes on September 29th in Killarney (South West Ireland) where dates and information can be found further on in the piece. In regard to coming to the UK for the first time Nichols has recently released acoustic versions of 2 of his number one hits from his ‘Crickets’ album ‘Yeah’ & ‘Sunny and 75’ which you can read more details about HERE as a taster for what UK fans may be able to expect from these upcoming acoustic shows bringing a traditional style of country music.

I’ve heard that country’s fairly new as far as gaining a fanbase is concerned but they are really committed and the fanbase over there lends itself to traditional country and that’s right up my alley! I’m a traditional guy!

When we were in Nashville back in June, we got to see exactly what people can expect from a Joe Nichols acoustic show and why it is a treat that British audiences will completely relate to with his laid back style of storytelling and terrific sense of humour when we were invited to attend his first fan club party to kick off our CMA Fest coverage (HERE) because this guy is so captivating to listen to and to hear him sing.

I love those kind of shows, the storytelling of what’s behind the song and the humour or sadness. Then being able to do songs that might get lost in a big show, just being able to play music that I don’t always get to play at shows because of the singles having to take preference in what we play live. That’s exciting to me! We get to talk a little bit, tell stupid jokes and stuff.

Following on from this trip to Europe, I was keen to explore where Nichols was in relation to new music coming out and what fans can be expecting to hear:

I’m in the studio now, I’ve been working on about 6 or 7 things so I think it’s shaping up to be an EP. There’s some really cool things I’m really excited about. There’s one particular song called ‘Not Enough’ that is really special and can be really special if we just finish it out right! I think we’re about 80% there!

The most recent original release from Nichols was his ‘Never Gets Old’ record 2 years ago so to hear that new music is on the way will be delightful news for fans of his music and a more traditional style of country music in general. However last year there was a project paying homage to some of the greats of the genre with a series of weekly covers as part of his ‘Never Gets Old: Traditional Country Series’ which featured versions of tracks recorded by Merle Haggard, Don Williams, Ronnie Milsap, George Jones, Charley Pride and a terrific version of Keith Whitley’s ‘Ten Feet Away’ which you can see the audio video below.

It’s one of my favourite Keith Whitley songs that I’ve always loved and it’s kind of one of those that hasn’t been done a lot. Songs like ‘When You Say Nothing at All’ have been done a few times by other artists but I was like that’s such a good song that’s probably forgotten a little bit over time. It’s a little bit of a challenge so thought maybe that would be cool to try  and go back to revisit that.

In addition to this wonderful array of traditional country heritage that has influenced him, the ‘Never Gets Old’ record ends with his version of ‘Baby Got Back’ which the original by Sir Mix-a-Lot won the Grammy for Best Rap Solo Performance in 1993 which is something that might sound absolutely bizarre but works so well and is a lot of fun to see him do it live and the fact that Sir Mix-a-Lot himself appeared in the video that he made for it showed that there is approval across genres.

We did the song and I never thought we’d actually get to record the song in the studio or thought we’d take it that far, but we did and put it on the album which I thought was kind of strange. Then my manager George called me one day and said I’m gonna reach out to Mix-a-lot to see if they’d be interested in doing a video for this song because we probably won’t ever release it to radio or anything like that but thought it was one of those unique moments that we should probably make more visible and see what he says about doing a simple little video. Then he was up for doing it and I thought that was really cool that he was agreeable.

This could well be something for fans at the European dates to look forward to and may appear as a good curve ball in a live show if that is what people want to hear as he is keen to let the people have what they want to hear each night in the acoustic setting so anyone attending the shows should not be afraid to throw out some requests.

If that’s what they want, I certainly don’t mind singing it! We’ll probably play it because it’s a funny thing to talk about and a little bit different. In that type of environment it’s much easier to do things if people say “Play this” but that’s what I’m there for! If people want to hear a certain song that’s been a favourite of theirs or something they don’t normally hear at a show, yeah I’ll absolutely do it!

The idea of playing different songs and opening up his back catalogue during the European dates is something that Nichols is looking forward to and grateful for audiences that appreciate a full record in it’s entirety.

I’m excited and nervous about it because I’ve got like 9 or 10 albums to choose cuts from so I don’t know what’s gonna come out. But man I sure appreciate people that appreciate deeper cuts and listen to an album as a whole, we just don’t have that a lot in the States. The country market is singles driven and there’s a lot that goes into making an album. A lot of time, energy and passion goes into songs that people may never hear unless they buy the album and listen to everything. It excites me to maybe pull out a few album cuts and play a little on just those things.

An absolutely fascinating guy to have the pleasure to talk to that is a very charismatic storyteller on stage with one of the most memorable male vocals you will ever encounter live that I am sure people really will not want to waste the opportunity to see next month. Joe Nichols kicks off his UK dates at Thekla in Bristol on September 23rd with all dates and ticket links below: 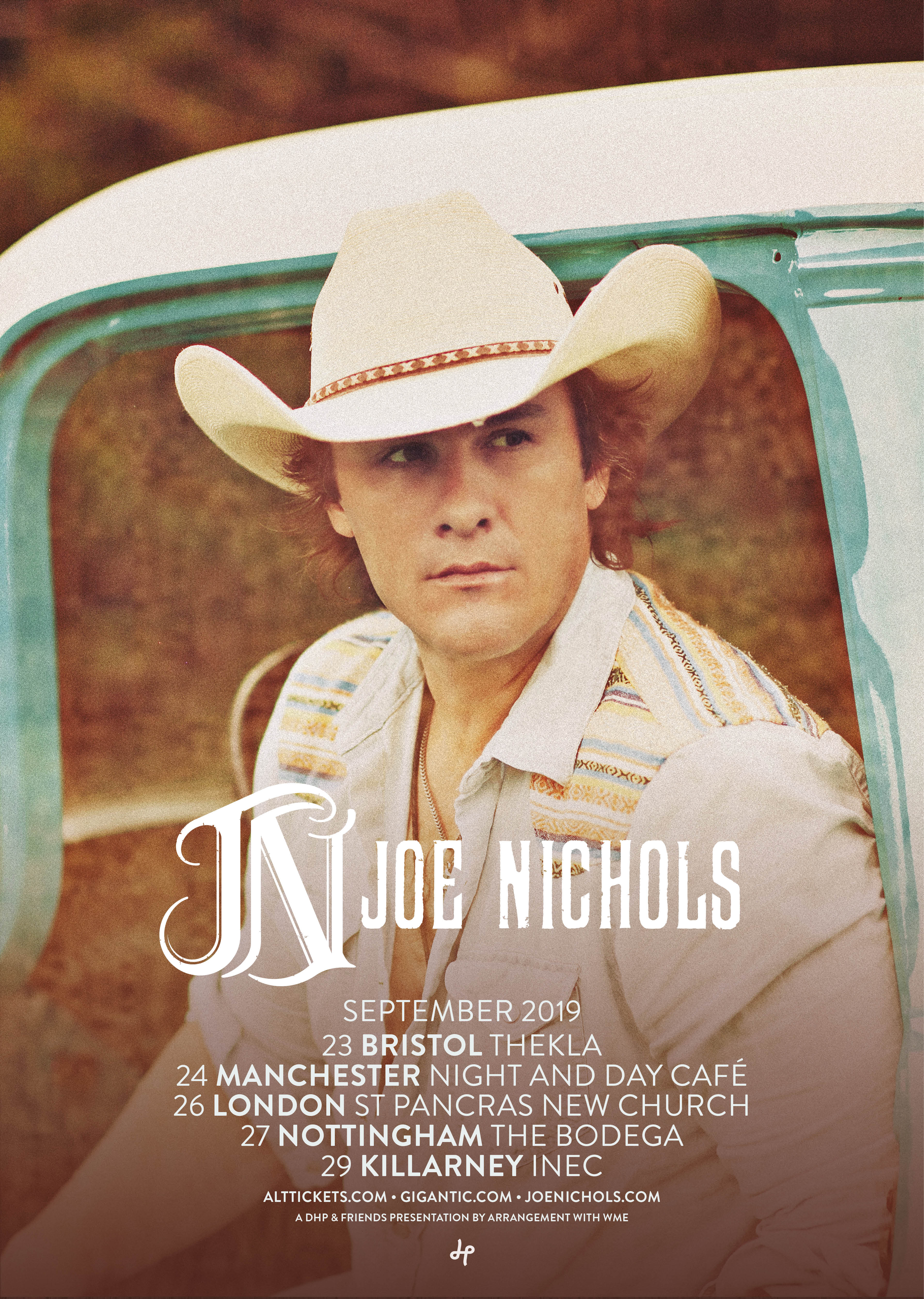