Nashville based, Georgia raised brother and sister duo Henley (Shea & Sayre) are beginning to make waves in music city. As esteemed performers and musicians in their own right and collectively have now released five singles where their maiden release “As Young As We Are”  has reached over 250,000 Spotify streams whilst the music video for the song reached #1 on the CMT 12 Pack Countdown. In the midst of discussing the crazy world of 2020 that Sayre described living through as “I’ve just been Oh My Gosh What does level 7 of Jumanji have to offer? We’re about to find out I guess!”, how Tiger King surely wasn’t broadcast this year, the joys of contactless delivery from UberEats and how the duo would love to be able to tour over here (they are big fans of Twinnie and would love to get on the road with her in the UK) I got to know more about the duo and their latest single “Alone Tonight”.

Henley (Shea first, followed by Sayre) on how they got into country music:

We are from a very musical family, everyone plays! Dad is a drummer, singer, multi-instrumentalist and arranger, then mom is an incredible singer, so we grew up with that and It goes back to our grandparents as well. SHE grew up a huge country music fan! 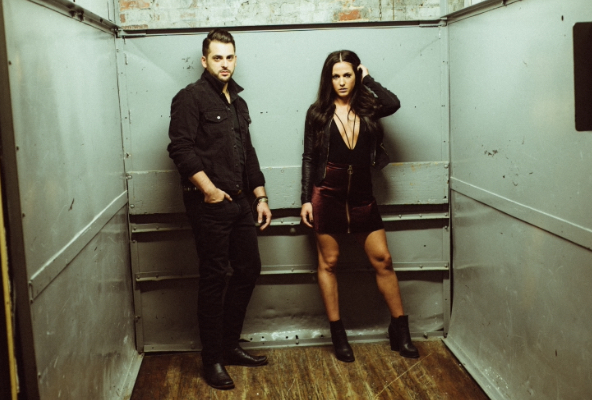 Back when we were kids, we sang and played and all that sort of stuff. We started recording on moms records, I remember when we were five years old and sang background vocals on one of her recordings. High school was really when I got into country music big time, I started listening to it in middle school but high school I became obsessed with it. I was a massive Rascal Flatts fan, anything with those heart-breaking, gut-wrenching lyrics. That was the entire of my little iPod Colour. Just country music! I knew that was my end goal and originally, I had set out to go to Belmont and plans changed so I decided to go to University of North Texas which is where Shea had just graduated college. I moved in with him and he had been playing drums for a red-dirt country band out in Texas, singing backgrounds, writing and producing. Building that country music brand and I was like country music people love families, lets do a country music family duo? We started writing a few songs together, those were the first songs I had really written and it kind of went from there. So it all started in Texas!

Sayre on the difference between the scenes in Nashville and in Texas:

It’s a totally different scene. I had no idea. I remember I moved there in August and Shea was playing for this band, I had no idea what Texas Country was. Shea took me to Fort Worth on my first weekend that I lived there and I was so embarrassed because I was dressed like I was going out in Atlanta, Georgia when I was in Fort Worth, Texas wearing cowboy boots, cowboy hat, starched jeans, like George Strait pearl snap button up and if they ask you if you dance? That does not mean, do you drop it like it’s hot? It means do you two-step? You don ‘t answer: yeah, I’ve danced for years! I did ballet, tap and dance! So that’s what I learned about Texas country, the difference to me is that Texas country has got that like grit. A lot of their records are really raw, they don’t overproduce at all. I love it, is there a massive difference between that and Nashville? Absolutely, but I do love both!

Shea on another scene and experiences of travelling across the pond:

I’ve been over there twice, I’ve been to England once. My “day job” I work for Dustin Lynch, so we did O2 Arena and that was great. Started in Dublin, then did London and finished in Glasgow. I went to Dublin early before the first show. Mom had always wanted to go, so we did 4 days and did the touristy thing, saw the cliffs and all that but London, it was so lame because we saw the airport and the sprinter that we were in.

and how the audiences differ compared to the United States:

We had tailored the setlist, they were using Spotify and Apple metrics because it wasn’t necessarily the radio hits over here. Dustin loves that, I mean any artist would like that. The chance to change the setlist and play for an attentive audience, which is what I found both times when I’d been over. I toured with an independent artist years ago to Belgium, Germany and France which was the same.

Sayre on the idea behind new single “Alone Tonight” (which you can listen to HERE) and writing the song:

It’s comes about one of my ex-boyfriends who is also a country singer. The relationship started out normally, he treated me really well, we went out during the day, we would have dates and things like that. Then when he jumped on the road, it was just I’m gonna call you after I’ve had a few drinks at the weekend or when I’m in town on a Monday night when I’m bar hopping with my buddies and you’re gonna get that 11:30pm or midnight text message saying where are you? Come and meet me for a drink! Then even though I knew that was all it was anymore and that there was no relationship, I still would throw myself into that zone of getting my heart hurt to meet him for a drink or would show up at the bar knowing that he was going to be there even though I hadn’t heard from him. I would just wait anxiously in my cutest outfit, thinking I know he’s going to walk in like an hour and he’ll for sure talk to me. Even though I knew I’d end up getting hurt, I still kept putting myself in the situation so that’s exactly what it’s about. We wrote it with a close friend of ours, Kenneth Duncan who we have written with a bunch of times, Shea always seems to come in with a groove and a melody. As much as I hate to bring this relationship back and to my brother, I’m gonna have to do that. I’d been waiting for an outlet to tell that story and it just ended up being the perfect opportunity! Shea really went behind it with the vibe as far as production goes, he put together a rough track of it and I was like I love that, we just need to fully go in that direction which we did and here we are!

Shea on creating and recording new music during the current global pandemic:

Myself and our guitar player, who is kind of our silent third partner in crime, Cody Smith are both professional engineers so we have spent 10 years accumulating all our equipment. If Sayre wants to cut a vocal at my house and we feel safe doing that, he lives in the next town over and we can just email that over to him, we can work on tracks together. That’s how “Alone Tonight” was done. We cut it in my studio space, which is a converted garage. We’re self-sufficient, I’m a drummer by trade and Cody is a guitar player, we both can play keys. The three of us have finally turned the corner into our own little sound which we’re happy with so it hasn’t stopped us.

Then finally Sayre on releasing new music during quarantine and what else we can expect from Henley:

Well the reason that we had planned to put this single out early was because we are actually working on our first full length album for later this year. We were deciding between an EP and an album, then looked at what we had which was enough for an album and an idea for a title so were like let’s roll with it! Maybe another single before the album comes out? I think in the pre-order phase that’s always a good idea that the bigger mainstream artists are doing that to keep it rolling and everyone involved.

Their current single “Alone Tonight” is out now, which you can listen to HERE, then you can learn more about Henley by visiting https://www.wearehenley.com and connecting on Facebook, Instagram, and Twitter.

New Official Video for “Think About It” from James Ro...