The has been a significant amount of resurgence for country music on this side of the Atlantic and particularly a growth of our own brand of country music that has a rapidly emerging scene. The United Kingdom of Great Britain and Northern Ireland comprises of 4 nations that despite all being “British” each has it’s own identity. We have seen the rise in country and Americana predominantly amongst English artists through the likes of Lucie Silvas, Yola, Jade Bird, Ward Thomas, Twinnie and The Wandering Hearts then the short hop across the water has a rich history of country music whilst Scotland has brought us UK favourites like Raintown, Kerri Watt and even multi-platinum Grammy nominee Lewis Capaldi made one of his very early appearances at Country to Country in Glasgow.

Yet what for Wales?  Music and singing is part of their national identity with world renowned voice choirs, world famous unforgettably powerful voices like Sir Tom Jones or Dame Shirley Bassey along with some of the biggest bands this country has seen over the last 30 years including Stereophonics, Catatonia, Feeder and Manic Street Preachers. A country that prides themselves of being the land of the song has not appeared to have come to the country party yet – until now!

The Swansea based duo of Laura Benjamin and Marcus Gumms are already making waves with their diverse and dynamic sound that is beginning to put Hawthorn Avenue firmly onto the map. With an air of an almost darker sound heavily reminiscent of classic rock infused with a mystique of folk and contemporary country with a real feel of the golden era of Fleetwood Mac brought right up to date it is no surprise the duo have already received support from Country Hits, Chris Country and Radio 2 along with their debut single “Wildfire” sitting on the A-list at BBC Radio Wales for 4 weeks.

When we first started we drew a lot of inspiration from Striking Matches at Fleetwood Mac with their more darker stuff but I suppose you would be drawn in to call it contemporary country though I feel it’s hard to not be a country fan and not love multiple types of music. So the first EP it had that darker, cooler kind of vibe and “Favourite Feeling” came out within 2 days of writing. We weren’t sure whether it fit but we just thought lets’s record it and see what comes out of it and it sort of stands alone, it may not go with our other stuff. We hadn’t released much before it but for a while we discussed whether we should release something as different but it was just a feel good song that it almost like didn’t matter and had such a good vibe that we just had to.

Laura touched on their new track “Favourite Feeling” which came out last month on May 6th (Listen HERE) is a slight shift from this darker introduction that came about from last years debut EP “Wildfire” as their latest offering is much more light-hearted and real feel good uplifting number highlighting their positivity and musical heritage in this perfect blend of contemporary country and commercial folk that emphasises how well their voices go together as they combine instantly gratifying harmonies, relatable lyrics and an infectious melody.

We wrote Favourite Feeling as the summer was starting to emerge in 2019, and we were both appreciating being in happy phases of our lives after weathering the storm for a while. I (Laura) was falling in love, and Marcus was welcoming his newborn son into the world. Life was a big party! The song is a reminder to us to let our hair down every so often… focus on the good and enjoy the moments we’re living in. We hope it helps other people to do the same!

With varying introductions to the genre where Laura was first enticed to the genre by the emergence of a young songwriter from Eastern Pennsylvania who we all know and love as one of the planet’s biggest stars Taylor Swift whilst Marcus found more of a traditional calling through admiration of the “Man in Black” Johnny Cash, the duo transitioned from country being a guilty pleasure that they incorporated into their individual performances to becoming the dominant driver.

The music scene around here is in it’s own little bubble so we knew each other via various other people. Marcus was in a band and I knew him through people that were in a band with him, then we started singing together because I hosted a jam night on Thursday’s in Swansea and we sung “Jolene” together so it started from there. I was doing a gig on a bank holiday and I said I could do with you having you with me if you fancy winging a gig with me? We sung together, people said our voices worked really well together so we did some writing then! We saw this 5 in 5 Song Challenge through an artist called Sarah Spencer, where she gave out a song prompt and you would write a song a day for 5 days which brought us writing our first single “Wildfire” so that’s where it came from.

The duo have built up a strong fan-base across South Wales and around Bristol where they talked about the genre is growing to be more sought after in the region. Like a lot of places around the UK where we have pockets or bubbles around a certain area that become loyal to the genre, this reigns true in their neck of the woods yet Marcus demonstrated how the growth is impacting on a wider scale where songs like “Tennessee Whiskey” and “Wagon Wheel” have been ingrained as favourites in the catalogue of most cover bands.

The area has a lot of support for live music and refreshing to hear there is considerable demand to hear original material across all genres that has allowed Hawthorn Avenue to be playing some decent sized venues already. We emphasised the sense of community and family that occurs in the genre over here which they have already realised exists way beyond Swansea but in the loyal UK country scene, where it is without ego or status seeing fans and artists united together they have already noticed how everyone involved is “Proud of the genre and seeing the growth over here, every achievement is almost everyone’s achievement and reflects positively on the genre!” This reaction and camaraderie between fans and artists is such a magical thing to witness and be a part of:

I’m always blown away by it! Every time I go to any kind of gig, the first time I realised this was when I went to The Long Road Festival the first year, I know it sounds really cheesy but it really is like a big family where everyone is friends. Compared to when I went to see Ed Sheeran where the amount of people that are pushing you back and forward or kicking off in the crowd where it’s just horrible, it’s not pleasant then at The Long Road everyone in the crowd felt like friends and that just feels like the general vibe where people are feeling like they are friends with all their favourite artists.

The current climate is uncertain given the situation regarding COVID-19 in the UK so for now Marcus and Laura have been like the rest of us in binge watching shows across the like of Netflix (for them they had talked about “Outer Banks” on Netflix which was produced by Charles Esten along with finding “Friday Night Dinner” hilarious) although they have been working on more new music that they are hoping to release through 2020. The plan is for further singles this year as opposed to an extended project like their debut EP as although they have a number of tracks recorded and produced that they are really proud of, without the means to tour and grow their brand on the scene it is harder to push an album until more people become familiar with them. Then also the singles route which is almost now becoming the norm in country music, allows each track to be given an equal amount of emphasis and love when they can be enjoyed individually whilst also prevents the danger of tracks almost been lost to some listeners not being the single that has drawn them in. 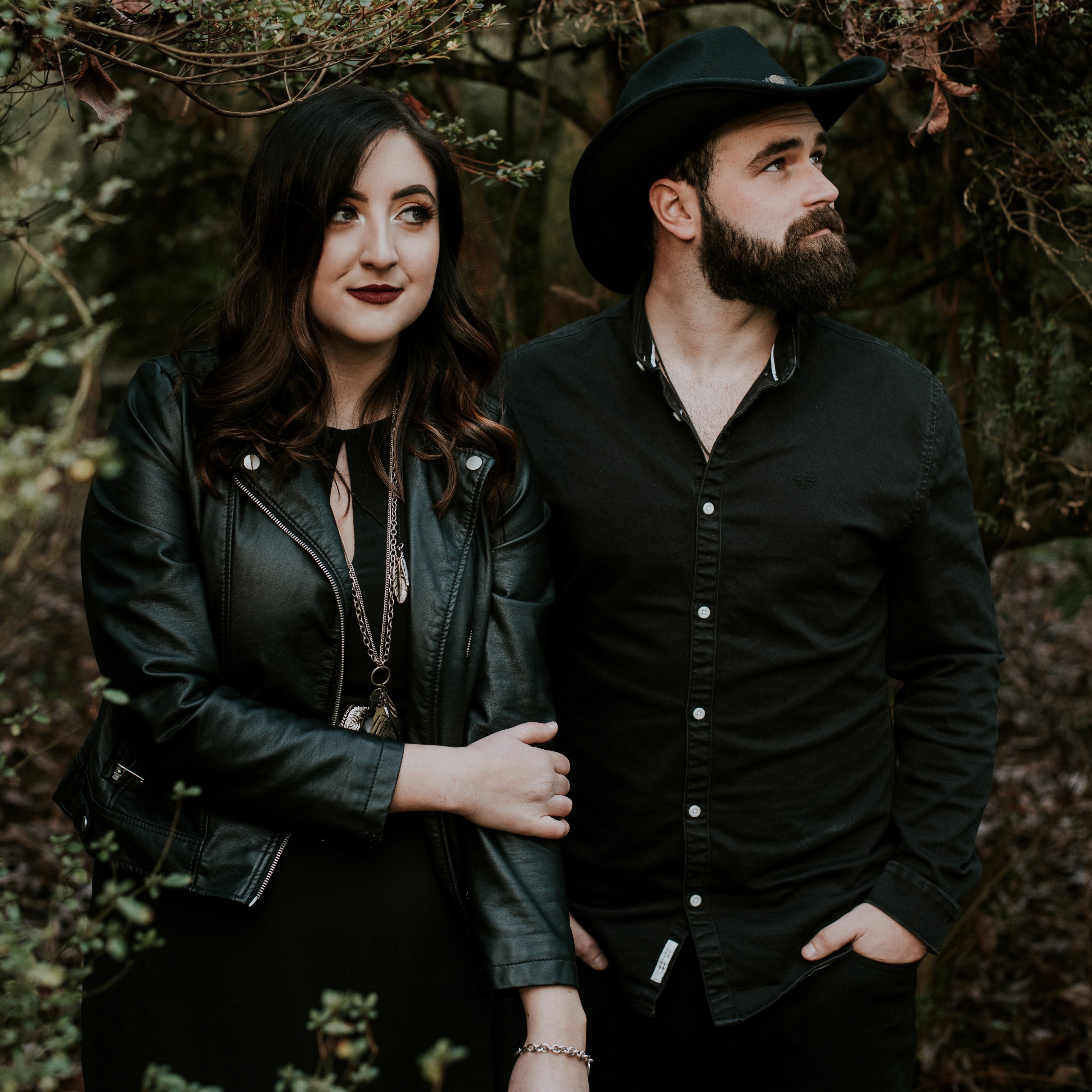 Both Laura and Marcus have already fallen in love with music city on their previous trips and were planning to head over again together this year before the current global pandemic put a big spanner in the works which has obviously had significant impact on allowing them to get out on the road playing festivals over here. They definitely are people that will very quickly be loved by the country community over here! Firstly as people, I see them winning a lot of friends and then their sound is really different and diverse with what they incorporate that it will not be long before Hawthorn Avenue are the most sought after country act on this side of the Atlantic!

To keep up to date with Hawthorn Avenue and to find out more about them, make sure you keep in touch with Laura and Marcus on Facebook | Twitter | Instagram