Since visiting on family vacations as a child, Gracie Garol fell in love with Nashville, it’s people and hospitality. Since graduating high school, the 23 year old originally from Cincinnati Ohio now gets to call music city home. She has previously joined Keith Urban on stage in her home town, she released her debut EP “Day Dreams” at the back end of last year and prior to the pandemic recently returned from her first trip outside of the United States where she had travelled around the Pacific coast and parts of the Caribbean whilst performing for Norwegian Cruise Line.  A young lady with a real passion for country music, it’s stories and how songs affect people led her to studying music and singing at Belmont University where she not only took a detailed look at the questions and difficulties facing woman in country music but more importantly WHY this is the case.

This comes to fruition with her new single “3 Minutes” which is out now, being distributed by Heart Song Records and available on all platforms HERE. The song is making a direct statement focusing on female empowerment and bringing further to light female artist not receiving recognition or airplay on par with male counterparts as it literally does just take 3 minutes to give them a shot.

Growing up I loved country music, it was literally the only thing I ever listened to! I grew up listening to people like Terri Clark and Sara Evans, then when I got to my teenage years, female artist just slowly disappeared. Carrie Underwood and Miranda Lambert were the only females that were around, Taylor Swift was coming about too but it literally just started becoming “bro country” with no females and the stories were disappearing. I missed it! I missed it a lot and found myself listening to older country music because I hated what was happening at the time. I realised I was pretty passionate about it so when I got into college at Belmont here in Nashville where I studied music and singing, I decided to really focus on country music. Throughout my years there I was trying to figure out my sound, who I was as an artist and how to create my own business because being independent you have to learn how to create your own business like a CEO of your company. I just kept coming back to why aren’t there many females in country music? Why is this happening? I decided to take that and really study it in college. I was songwriting and focusing on what females wrote about. If girls wrote about dirt roads and trucks, it wasn’t getting on the radio and if they write about what they’re passionate about, it still isn’t getting on the radio so it’s like what do we need to do? From what I had been researching and studying about, yeah you have to have a good song but the first thing you need for listeners was a hook or a melody and that is how females usually get there songs on the radio! For example, Gabby Barrett releasing “I Hope” made it’s way up the charts because of the hook which hit everybody and the lyric hit with the hook. There’s a lot of really great country artists who have made a huge difference in country radio here and debuting artists too which is absolutely amazing and people are finally getting it but it’s taking a while. In college I ended up doing a senior recital on women in country, like the beauty of it and focused on a lot of newer singer-songwriters and artists. I did like Danielle Bradbery, Cassadee Pope and Abby Anderson. I did Maren (Morris) in there too because she was still new then had some of my songs as well and everybody understood what I was trying to do. 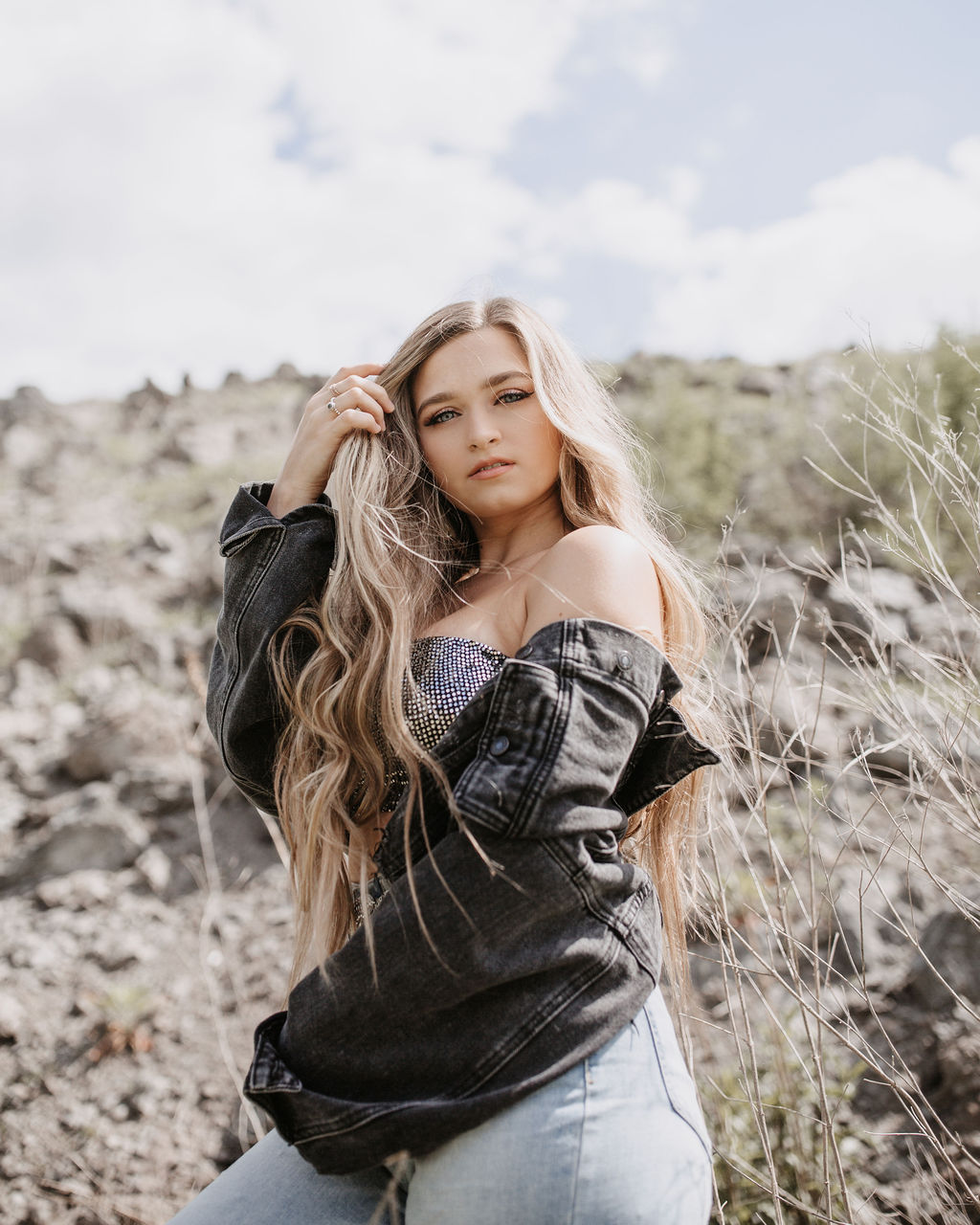 At the end of senior year, the CMA Awards were coming and I was sick of them nominating mostly men, I was like why aren’t there any females in there? So many good ones should be nominated and I don’t understand, that’s when I started having anger built up and I had a write probably about a week later. I went in there and I still was just talking about the nominations, he was just like let’s write a song about it! I was just talking and said a song is around 3 minutes, we just need 3 minutes to win! It’s all you need and after I said that, he was like that’s it. It just came so easily, so passionate about writing it and when we were finished it was one of my favourite songs I’ve ever written because I love it so much. After we got done writing it, I sent it to my producer, who’s one of my good friends too and he said we’re doing this, it’s going to be a single and we need to do this in the next couple of weeks!

I recorded this about a year ago, I was in the process of creating my EP and knew this definitely should not be on the EP because it had such a stronger message that I’d probably do it after. It was kind of sad that I’d just put out my EP in November, which was my debut EP but I’ve got some good stuff coming after so keep your eyes out! Then when I got back from the cruise in April, I couldn’t go on tour with the EP because of the coronavirus but I had this one song that I wanted to release but didn’t know when the right time was. I showed it to my publicist and he was like, we are doing this now and we’re going to release it. Let’s set up a date and get all this promo ready because this is the time. I’m just super happy the way that it turned out and so many people are really connecting with it.

I thought it made a good impact with what was happening with Black Lives Matter too because female artists, I guess it didn’t really occur to me until the movement really came about, that there are so many black female artist too and you don’t hear about them at all. The only person people probably heard about is Mickey Guyton. I love her and I followed her since high school but it just didn’t occur to me how difficult it is so I really started looking into that and there are so many black female artists too. I know it’s super hard for white female country artists and it always is but thinking for y’all we’re gonna make a change. So that’s what I’ve been doing and for the music video we’re hoping to shoot this month, we’re going to have a lot of women of colour and good diversity, so I’m excited.

We will be sure to bring you all the news about the upcoming music video along with any further news regarding shows when the situation over there allows it and more forthcoming new music. “3 Minutes” was written before she released her EP last year that she just felt was so powerful in terms of it’s message that it would stand alone, yet since returning from the cruise there is so much new music written that correlates to everything that she has done and what has been going on that there is a possibility of new music being part of an extended project as a “2020 get together album” as she put it potentially being on the cards.