What a year 2019 is shaping up to be for new albums from some of the country music greats who have not only given their fans so much pleasure over the years but also continue to inspire and influence today’s upcoming and more established country artists .

George Strait and Reba McEntire have already released their latest collections, Trisha Yearwood’s is out at the end of the month and last week the incredible Tanya Tucker gave us her first album of original material in 17 years with “ While I’m Livin””, recorded at LA’s legendary Sunset Sound studios and released on Fantasy Records.
Anticipation for this new album was heightened by several of its ten tracks being made available in recent weeks as well as Tanya being back performing live again in the past few months at several festivals and award ceremonies.  She was often joined onstage at such events by Brandi Carlile  a massive fan of Tanya’s who I’m sure you know has co-produced “ While I’m Livin’” alongside Shooter Jennings, son of Tanya’s good friend and fellow outlaw country artist Waylon Jennings and Jessi Colter.  The two ladies seem to have formed an incredibly close bond since being introduced by Shooter, their onstage chemistry and mutual respect when speaking of one another is palpable.
Both Shooter and Brandi also play on several of the album’s tracks, Brandi contributing background vocals too, but throughout the production and arrangements never deter from Tanya’s distinctive voice and instinctive phrasing which is in essence what the album is all about. Despite several of the tracks referencing the well-documented darker times in Tanya’s life ( she has said that its been “ a lifetime in the making” ) it is ultimately an uplifting listen and leaves you in no doubt that Tanya is still a force to be reckoned with on many levels, not only musically! 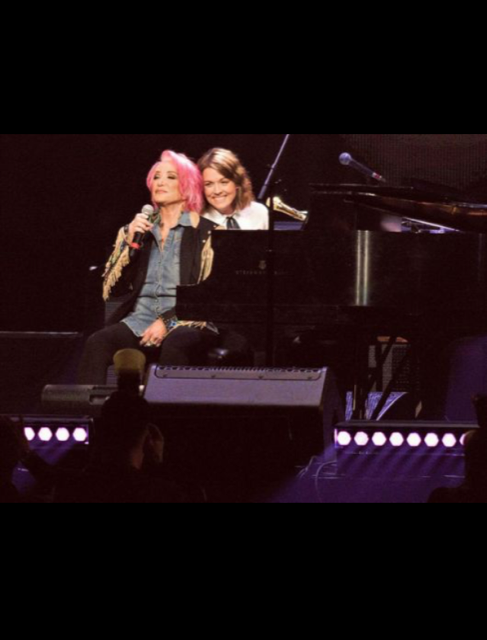 Containing seven originals penned especially for this collection by Carlile and her band members/frequent collaborators Tim and Phil Hanseroth ( Tanya co-writing with them on the closing track “ Bring My Flowers Now” a line from which provides the album title ) there are also three well-chosen covers which dovetail perfectly, partly thanks to subtle lyrical tweaks and partly as they could easily have been written about certain aspects of Tanya’s life.  “ High Ridin’ Heros”  (chosen for inclusion by Shooter and which was previously recorded in 1967 by his father alongside its writer David Lynn Jones  ) for example is now gender-switched to be about a female who, like Tucker,  is from Texas and is an incredible horsewoman.  And “ The House That Built Me”  which of course was made famous by Miranda Lambert is now more appropriately for Tanya sung from a mother’s perspective. This is a favourite track of mine, the emotion in Tanya’s raw vocals is tangible and makes an already very moving song even more poignant this time round as far as I’m concerned. Add a simple acoustic guitar, piano and cello accompaniment and get those tissues out!
https://youtu.be/Qu0GRd0fSCQ
Talking of simple accompaniments, just listen to the stripped back piano backing on the aforementioned “ Bring My Flowers Now” which really helps focus the listener on the song’s lyrics. Inspired by a conversation between Tanya and her great friend Loretta, and performed live by Tanya and Brandi at Loretta’s birthday tribute concert in Nashville in April which I was fortunate enough to witness,  Tanya urges people to appreciate others while they are still around. Don’t spend  “ time, tears and money on my old breathless body” she implores.  For me it’s the ballads such as this one among this collection that particularly connect, and this is the perfect track with which to end the album.
At the other end, its ballsy mid tempo opener “ Mustang Ridge” sees Tanya lamenting about a past that’s “ hard to outrun” and defiantly reminding us that  “ a woman’s life ain’t just a list of the worst things she has done”, no doubt a nod to the notoriety she gained over the years for her colourful personal life which often sadly overshadowed her numerous musical achievements. Again, it’s a perfectly placed track as she is looking towards the future with positivity.
With the album being described by Brandi as a “ musical biography of sorts”  some of its tracks are naturally of a particularly personal nature, possibly none more so than “ The Day My Heart Goes Still “ about Tanya’s enduring love for her late father. He also features prominently in “ Rich” which is based around her childhood memories and contains a “ Coat of Many Colors” style message…… it’s not necessarily money that’s needed to ensure happiness while growing up. And her fondness of her birthplace of Seminole, Texas inspired the gospel tinged track “ Seminole Wind Calling”.
One more song I want to single out for a mention is the one that got me laughing out loud on first listen with its witty lyrics which are delivered with a particularly acerbic tongue by Tanya.  “ I Don’t Owe You Anything” is a honky tonk infused leaving song, delivered with attitude by the bucket load.
https://youtu.be/aquZBLpxw9s
It apparently took a lot to persuading from Shooter ( and later in the process, Brandi ) to get Tanya to record this album, and I feel that the world of country music owes them a huge debt for their perseverance and whatever else it took to convince her and allay any fears or reservations she had . What a triumphant return ( see, Tanya, I’m not referring to it as a “ comeback”!) it is, my list of contenders for “ album of the year” definitely just got a little bit longer.
In addition Tanya’s fans have a documentary ( “ Delta Dawn Then And Now, The Return of Tanya Tucker”)  to look forwards to in the near future. And Tanya will finally be receiving a star on the Hollywood Walk of Fame next year. Can i get a hallelujah?
“WHILE I’M LIVIN’ “ TRACKLIST

2. The Wheels Of Laredo

3. I Don’t Owe You Anything
(written by Brandi Carlile, Tim Hanseroth and Phil Hanseroth)

6. The House That Built Me
(written by Tom Douglas and Allen Shamblin)

( A further two tracks are included on a special release CD available only at Target stores Stateside, Tanya re-recorded her first number 1 single from 1972 “ Delta Dawn” plus a track entitled “ Pack Your Lies and Go” which I don’t have writing credits for)

Ahead of upcoming UK tour in September, Ingrid Andress redefines ...