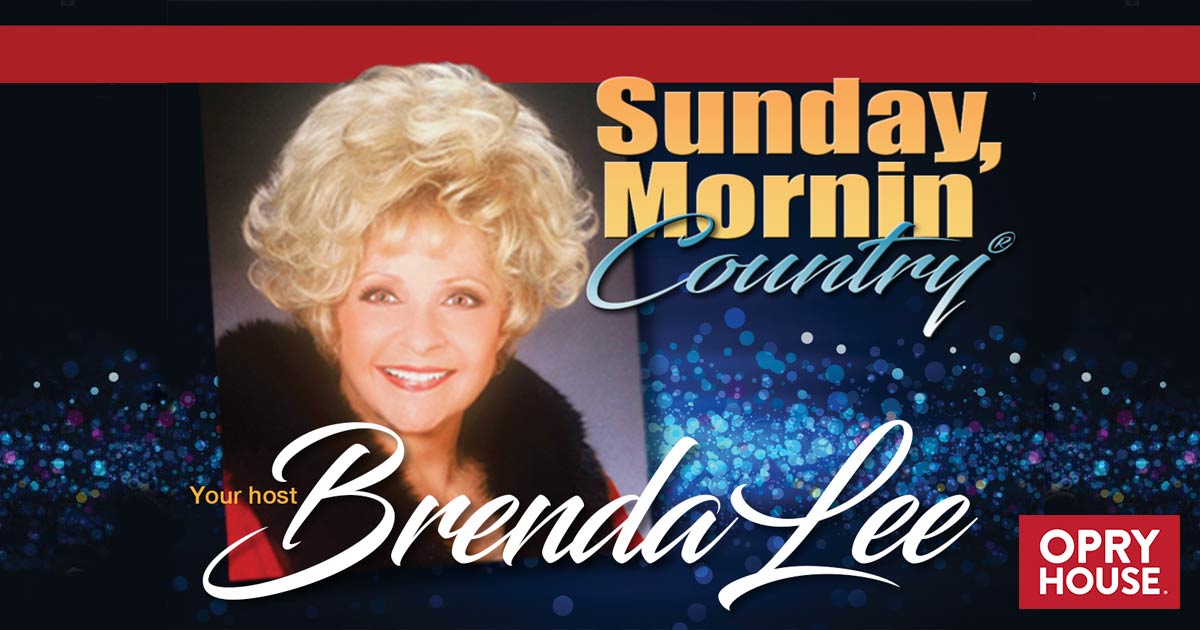 If you have been to the Grand Ole Opry as many times as I have, you kind of know the drill, or so you think.  I’ve been to a typical Opry show many times and it’s a mix of new and classic artists, with a good dose of clean humor, and a few mentions about that show’s sponsors.  That’s about how it goes, but don’t be fooled. That venue wears more than one hat.

I’ve been to the Opry House when The Scorpions and Queensryche took it over, and rather than the usual cowboy hats and square dancers, the entire building shook with pounding bass and screaming guitars.  That was one extreme. On Sunday, June 9th, things weren’t quite that far off the Grand Ole Opry’s normal path, but it was different.

How different was it?  Well, some friends of mine arrived at the Opry before me, and the youngest in the group, a 20-something, asked if they were attending a church service.  That’s how different. This was certainly going to be interesting. I guessed right away that there weren’t going to be any crazy guitar solos or intense light shows.  I was correct. This was Sunday Mornin’ Country. It was held in the Grand Ole Opry House, but it was a whole new ballgame.

The graphic on the big screen behind the stage included a cross, indicating this edition of the Grand Ole Opry certainly had religious undertones, at the very least.  I would suppose if you weren’t into that sort of thing and you purchased tickets, not knowing what you were getting into, you exited the minute you saw that graphic, or if you’re like me, you stayed no matter what.  I am the type of person that never looks down on something different. I’m willing to try anything if it involves music, and I would never leave a show before giving it a chance. That’s just me, however. I would understand a person with strong beliefs of a different type, feeling the need to leave before anything started.  After all, most people see the world “Opry” and they think of the typical show I described earlier. If that’s what they thought they were buying into, I can understand them being taken aback.

Moving forward, I was graciously asked to come to the show to see country artist Adam Warner appear on the Grand Ole Opry stage for the very first time.  Having seen him perform before, I was very happy for him to have the opportunity to sing in that most coveted of venues, and I was glad to write about my thoughts on how he did, and the show in general. 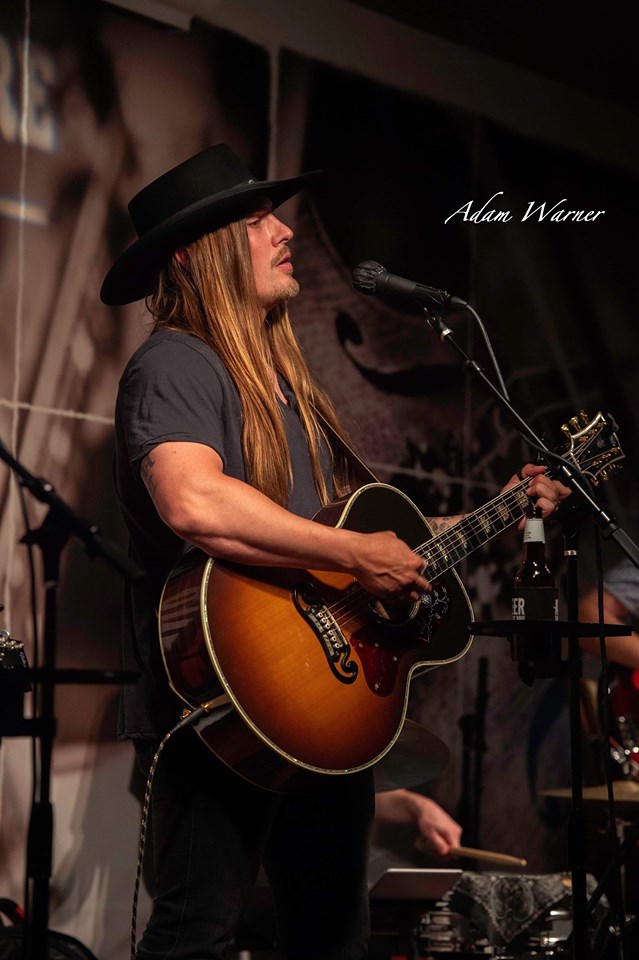 Sunday Mornin’ Country was hosted by the legendary Brenda Lee.  Lee, the petite country artist nicknamed “Little Miss Dynamite” after her 1957 hit single, “Dynamite”, often joked about her short stature during the show at the Opry.  She also liked to say she was getting old and forgetful, but I thought she was quite sharp and very funny. At one point she gestured toward her hair, which remains in the same general style it has been in for many years, saying, “Listen, I got a building permit for this before I came.”  Her hair does have volume!

It seemed like an endless stream of artists that day, singing gospel hymns and thoughtful ballads.  There were some more upbeat numbers, but I must say, it did feel a little bit like being in church, a church with a good sense of humor and some extremely talented musicians, but church, just the same.  I’m not knocking it, I’m just telling it like I saw and heard it.

There were a few standouts that I need to mention before I get to Adam Warner, who was my main reason for being there.  Holly Watson, daughter of country star, Margo Smith, blew me away with her rendition of “It Is Well With My Soul”. Now, I’m going to be honest here.  I’m not a gospel fan. I don’t dislike it, but it’s just not something I would listen to on a normal basis, but I am a fan of amazing voices. Watson has one of those voices.  You know, those ethereal, angelic voices that you know people must mostly be born with. They can work hard to make them better and better, but the foundation is there from the start.  They are a gift to all of us. I was astounded.

It made me so happy to see a repeat performance of a song I had just seen done recently by two artists I was quite familiar with. Jeannie Seely and Tim Atwood, both fixtures at the Grand Ole Opry, and both so talented, were at a benefit for artist, John Berry back in April at City Winery.  With Atwood playing piano, he and Seely sang “Old Friends” at that benefit. It was simply stunning. They reprised this at Sunday Mornin’ Country, at least for me, since I was at the Winery show, and I was so thrilled.  With a slide show of country artists that are no longer with us, such as Johnny and June Carter Cash, Porter Wagoner and Seely’s good friend, Dottie West, I’m sure there were people reaching for tissues to dry their eyes.  I could watch this song done over and over again.

James Wesley, who may be new to some, and not new at all to others, having had songs on country radio, was wonderful.  I’ve known Wesley for a while now, and this was my first chance to actually see him play. He performed his 2010 single, “Real”.  Guess what? He’s really good! I hope he sees this, if you know him, show him. Seriously, though, he’s back at the music game in a big way, and folks are lucky for that.  He’s a true country guy and his music is as genuine as he is.

Now, for the man of the hour.  Mr. Adam Warner, who hails from Lawrenceville, Illinois, but now calls Nashville home.  It was his first time setting foot on the Grand Ole Opry stage and he was there to sing his original song, “Someone God Can Use”.  How did things go from where I was sitting? Let me tell you.

First off, a little back story on the song, and he didn’t tell it at the Opry, I doubt there was time.  I heard him tell it at another show recently. He actually became inspired to write it while sitting in church listening to his pastor give a sermon.  The pastor was talking about how even people that might seem disposable or not worthy of being a part of our society, can be. They certainly might be “someone God can use”.  I think you can figure out the rest.

What I love most about songwriters is how a song can be born just about anywhere at anytime.  Anyone can be the catalyst for a new one. You, the person reading this right now, may have been the inspiration for a song at some point.  You never know when a songwriter is sitting next to you, overhearing your conversation, and an idea is brewing in their head by something you and a friend are saying.  Maybe this is fair warning. Be wary of what you say in public, at least in songwriter hotbeds like Nashville. You just never know.

Warner looked sharp.  He was well-prepared to do this thing right.  Dressed all in black with his signature black hat (if you want to know more about that hat, read my interview with Warner on our website, it’s a great story), he chose not to play guitar himself. With a guitarist to accompany him, he stood confidently and sang, “Someone God Can Use” for an audience that, I think, was anxious to hear him. Brenda Lee gave him quite an introduction, mentioning the many impressive artists he has already worked with, including Trace Adkins, who covered his own song, “Semper Fi” as a duet with Warner.  Lee also told Opry-goers that Warner’s song, “Welcome to the South” is the official welcome song for the Tennessee Titans. I think all of that grabbed their attention before Warner sang one note. 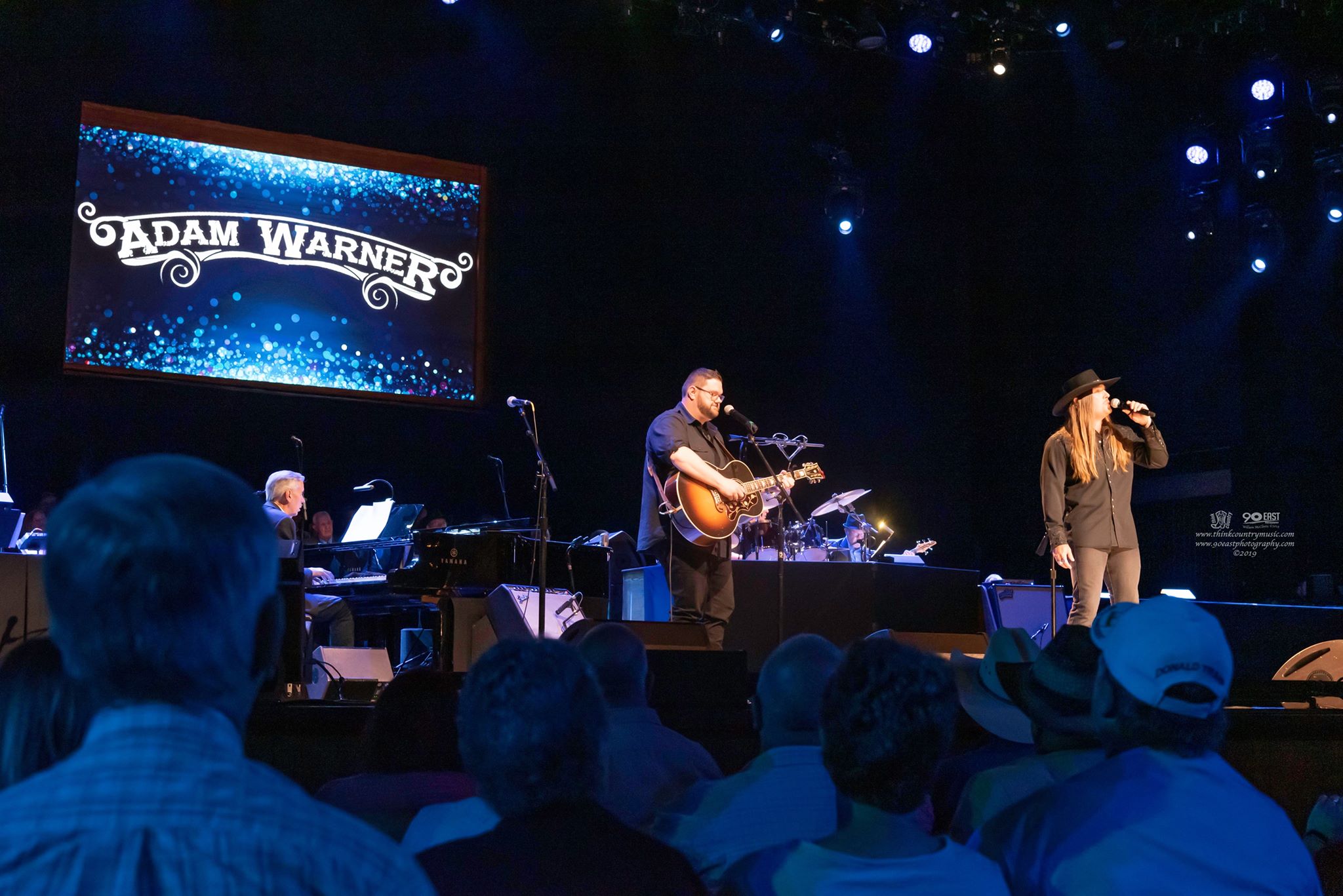 “Someone God Can Use” is nothing fancy.  It’s written in plain English, but the message comes out loud and clear.  Don’t discount anyone you see, because every person has a story. Until you know that story, you will never know what they’re capable of, or what they’ve done in their lives.  It’s a really powerful song that anyone should be able to relate to, whether you call yourself a believer or not. Even if you aren’t, it costs absolutely nothing to be kind and accepting of everyone.  I think more than anything, that’s the point the lyrics are trying to convey. Give everyone the benefit of the doubt and stop judging before you know the true, full story about a person.

Adam Warner did a great job.  He did so well that an artist as beloved and respected as Brenda Lee asked him if he was signed to a label, and when he told her he was not, she was confused.  I would say if you get that kind of compliment from a Country Music Hall of Fame member, you’re doing something right. Then, she went on to “fangirl” a bit and say he was a good looking guy.  Again, she said, “And I’m old, but I can look.” Naturally, that generated a good deal of laughter. She was a fun host. 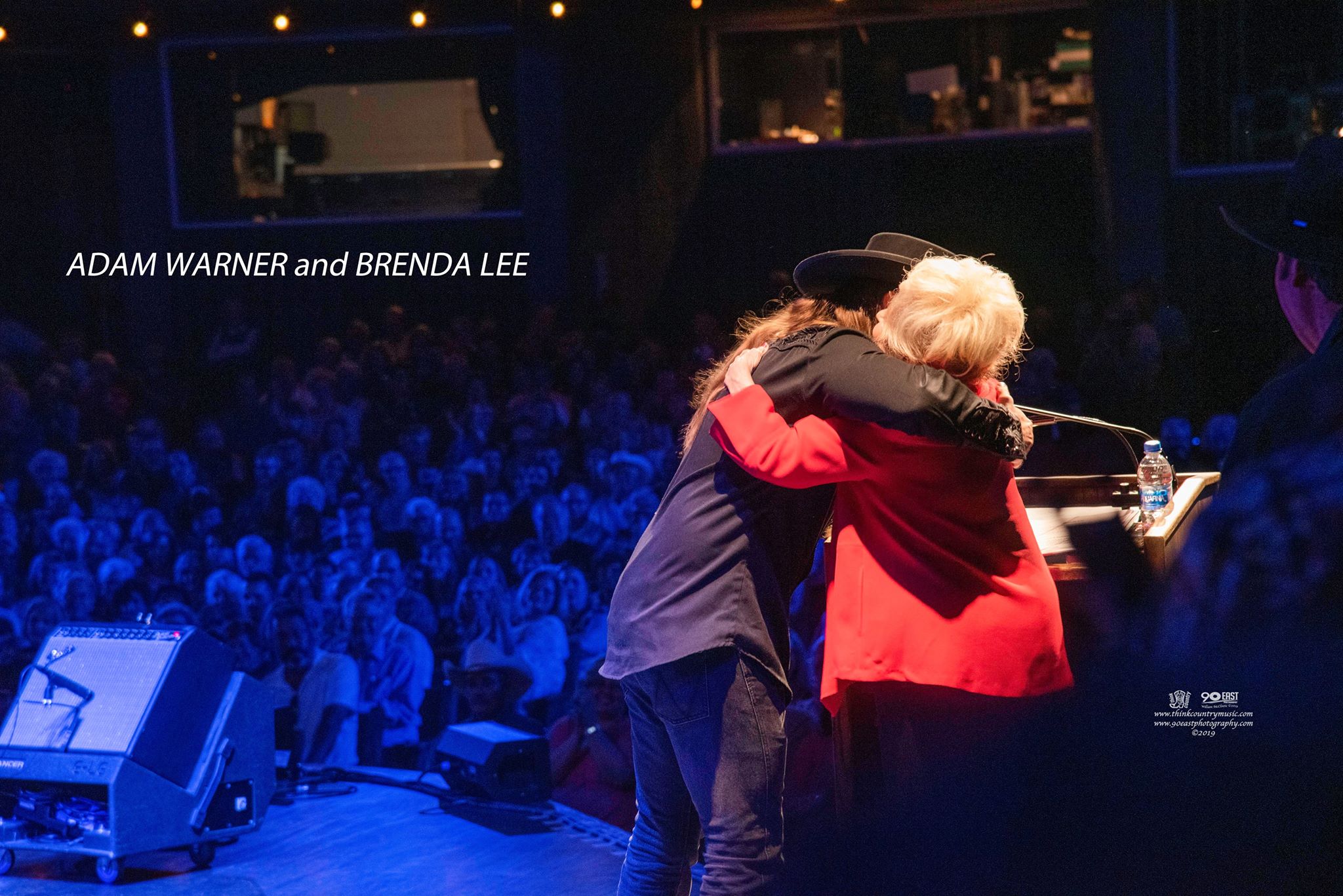 If you want to see other sides of Adam Warner, without a doubt, go see him play a show.  He can sing songs like “Someone God Can Use” and turn right around and whip things up with rowdier numbers.  This is a versatile, country artist with solid family values and a good head on his shoulders. Check out his music using the links I’ve listed below as well. 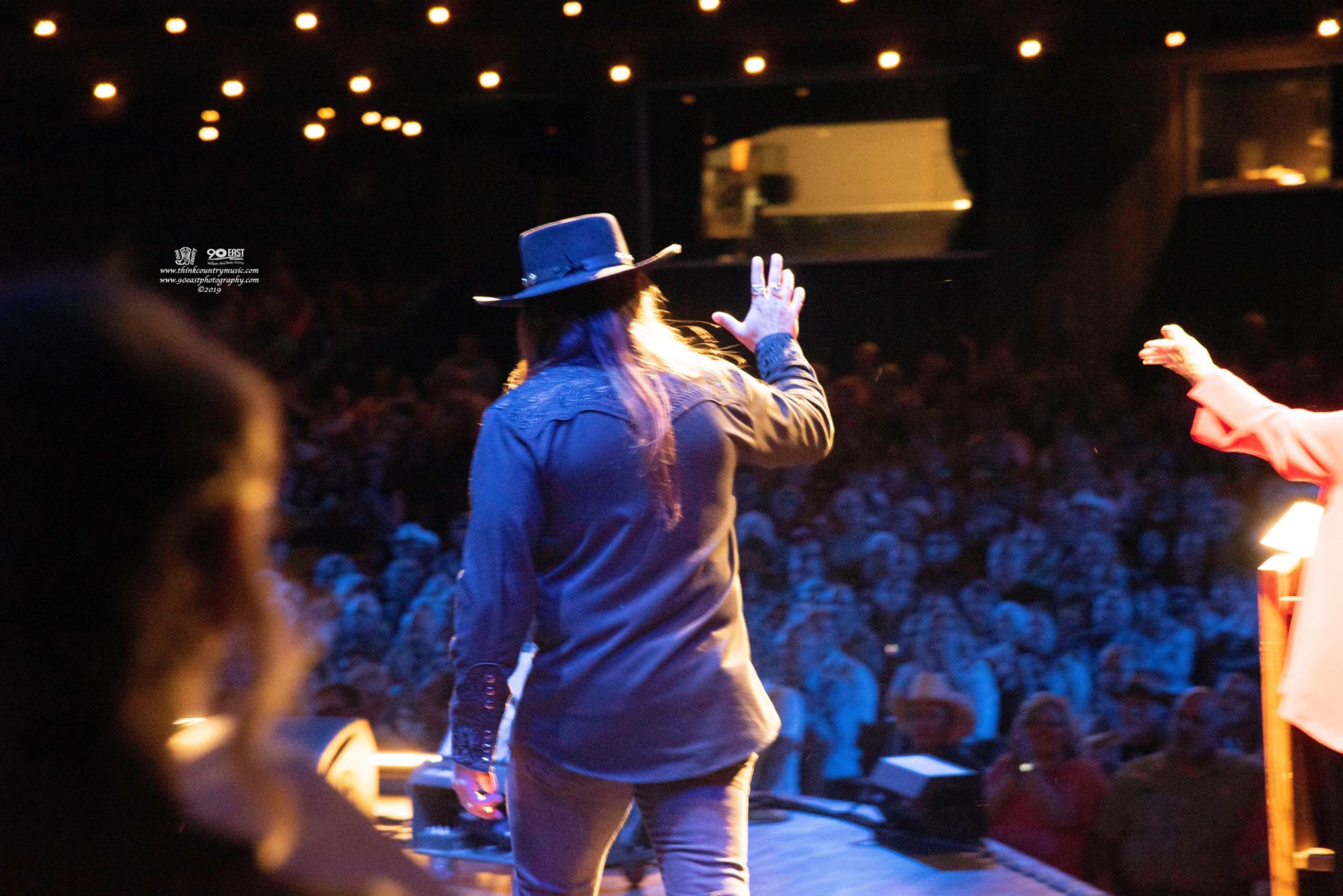 The 39th annual Sunday Mornin’ Country was, for me, a new experience.  It was a bit unusual, and hey, I was surprised, but I roll with stuff like that.  I don’t get angry or bored and complain that it wasn’t what I thought it was going to be.  I sit back and take in something new, and in the end, I liked it. Will I go out and buy a bunch of gospel records?  No. Would I attend this show again? Sure. Live music, to me, is where the magic is. I might not listen to everything that was presented to me at Sunday Mornin’ Country on my own, but as a living, breathing show?  Bring it on!

Adam Warner can be found: