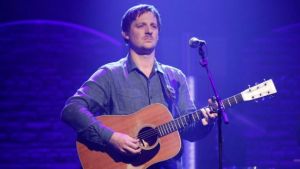 The creative genius that is Sturgill Simpson has become known over the last few years for his merging of outlaw and traditional country, rock ‘n’ roll, blues and folk into one excellent melting pot, and his third studio album ‘A Sailor’s Guide To Earth’ recently blew fans’ minds by incorporating soul and big band swing to boot. Sturgill has regularly made the trip across the Atlantic since his debut album hit shelves, and he will once again tour the country this July. In celebration, here is a rundown of some of the best Sturgill Simpson songs. Still, we urge you to listen to the albums from top to bottom, as he is rather the master of the concept album (and all of his songs are great).

10. It Ain’t All Flowers (Metamodern Sounds In Country Music)
An experimental rock track, It Ain’t All Flowers clashes against distortion as it laments the clouds that come with every silver lining. A simple sentiment jazzed up, it’s an example of why Sturgill is such an intriguing artist.

9. Breakers Roar (A Sailor’s Guide To Earth)
This dreamy piece is filled with lush string orchestration and floaty, reflective lyrics juxtaposing the ebb and flow of tide against wisdom on not letting the obstacles of life drag you down. A lovely, peaceful song for a rainy day.

8. You Can Have The Crown (High Top Mountain)
An upbeat honky-tonkin’ foot-tapper, You Can Have The Crown is a smart take on Sturgill’s own experiences having left the Navy and trying to forge a career as a musician, but failing abysmally (at least at the time)! It’s a classic “fallen on hard times but I’ll drink my blues away” song.

7. Long White Line (Metamodern Sounds In Country Music)
Long White Line incorporates bluesy country rock into a foot-tapping tune that waves goodbye to the narrator’s old life as he pursues a life on the road. It’s typical Sturgill with some great guitar work.

6. Sea Stories (A Sailor’s Guide To Earth)
This bluesy stomp might seem like a fun and rowdy track, but it follows a heavily autobiographical and very pointed narrative recalling Sturgill’s experiences in the Navy before being kicked out. He finally reveals that he’d rather leave the Navy behind than die for lies in a politician’s war.

5. The Promise (Metamodern Sounds In Country Music)
A When In Rome cover, Sturgill’s version of The Promise dramatically alters it from a synth pop 80’s hit to a stripped-back country folk ballad. With lyrics professing unconditional love, Sturgill’s Waylon Jennings-esque vocals take us back to a purer time in country music.

4. Hero (High Top Mountain)
This traditional country ballad is an ode to what we assume is Sturgill’s father, a hard-working, honest man who was good and kid and loving. It reminds us to count our blessings rather than our burdens.

3. Call To Arms (A Sailor’s Guide To Earth)
Along similar lines to Sea Stories but less subtle with its political stance, Call To Arms is a jazzy blues-rock jam taking aim at the military and the politics of war, before turning on Hollywood and 21st century digital culture. Its mission statement is clear: do your research, be more aware of what is truly going on, and educate yourself.

2. Turtles All The Way Down (Metamodern Sounds In Country Music)
With the title a reference to the old idea that the world is flat and supported on the backs of multiple turtles, it is often used in conversation as a way to win an argument where you feel your own logic begin to fail. Turtles All The Way Down is a 70s-era traditional country song that dismisses religion whilst supporting the use of drugs to expand our minds – yet concluding that love is all we really need. Only Sturgill could fit all that in a three-minute song!

Jess and the Bandits