‘We’re All Somebody From Somewhere’ review by Amy Westney 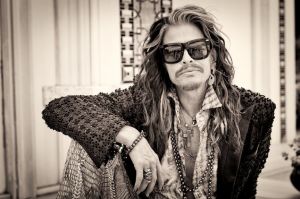 Steven Tyler, the lead singer of one of the biggest rock bands in the world. A name recognised by people across the globe both young and old. Not a name, however, you would associate with the words Country Music; not until now at least.

Tyler’s Country debut came in the form of ‘Love Is Your Name’ which received positive reviews from media sources. It was a strong introduction to the ‘new’ Steven Tyler being presented to us and a great start to this change of genre though only peaking ats 19 on the US Country charts. This was followed up by ‘Red, White & You’ which again struggled in the charts. With Tyler’s audience over the years being rooted in Rock and there being mixed feelings about this new venture it wasn’t surprising the singles didn’t do better but it certainly left a lot of questions about what the album would bring.

When I got the chance to review ‘We’re All Somebody From Somewhere’ I jumped at the chance. Just like everyone else I was intrigued to hear what he could bring to the table. He isn’t the first Rock artist to try his hand at the Country thing; the question is how well could he do it?

‘My Own Worst Enemy’ kicks off the album, a slow yet powerful track which gave me a little buzz about the rest of the album. With harmonica complimenting the super country melody in the chorus it is clear that Steven is passionate about this album. The start with a slow track is a bold move for the Rock star but it was a great intro. My only criticism on the track is that they end it with an Aerosmith/Rock type guitar solo… The song naturally reaches its conclusion with 1 minute 30 seconds to spare before this kicks in and completes the track. I didn’t feel like it was needed personally but I see how they could have included it to remind everyone you were still listening to this seasoned rocker.

The title track ‘We’re All Somebody From Somewhere’ for me is very cliche. An upbeat track, there are a couple of spoken sections in the songs and the lyrics just seem to list of various things associated with the South. The track does allow for some audience participation though which is certainly something it has going for it as a live track. This is followed but a gritty Southern Rock track called ‘Hold On (Won’t Let Go)’ which features heavy distortion on the vocals. At this point they seem to have made a detour from Country and I am starting to feel like although each track holds it’s own merit there is nothing holding them together as part of an album yet.

‘It Ain’t Easy’ just brings the album back to the introduction we heard. It is a great Country ballad and I wasn’t expecting for Tyler to be stronger on these tracks than the upbeat. fun, sing-along songs. “It’s like tryin’ squeeze a drop of rain out of the sun”
The track brings some really beautiful imagery to the listener and takes you on a journey through the journey of heartbroken Tyler. It is an extremely vulnerable song which oozes passion from the vocal line. Though the song feels very personal to Steven it is a feeling that I am sure many of us can relate to. Those hard times when you feel like you are lost and can’t seem to find your way, it is depicted so perfectly in this track. It is brought back up with ‘Love Is Your Name’ coming in as the next track.

‘I Make My Own Sunshine’ has a clap running through it and though more reminiscent of a pop tune gone country with the steel guitar parts it is incredibly catchy, upbeat and would have even the biggest critic tapping their foot away from the get go. I absolutely love the use of the title line to bring an uplifting message of you can make your own luck and happiness so don’t let others bring you down. It starts and finishes just how it should not too much and just enough to get it stuck in your had. ‘Gypsy Girl’ is yet another slower tune though it has a great beat throughout which keeps the pace of the song going. These slower tracks at this point are definitely my favourites from the album. From there we head to ‘Somebody New’ which has a strong Bluegrass banjo lick running through the song. It is a this point things seem to be coming together. Had this album been put out by anyone else it would definitely raise more confusion but I feel like it is telling me a story of the eclectic mix of country and the influences that brought Tyler to the decision to make this.

‘Only Heaven’ brings us a little more of the rockier side of Steven Tyler that we all know and love from over the years. This could 100% be an Aerosmith track. With some amendments to the instrumentation on the song it would not be out of place at one of their concerts. Its interesting and I can’t help but think about just how much these genres all seem to be merging into one at many points. It is a solid Country track but on the flip side it would also be a solid Rock track. In fact I’d love to hear the legendary band take this on with some killer harmonies! Another gritty Southern Rock track plays next with ‘ The Good The Bad The Ugly & Me’. This is another track that although I am not sure I like it as part of the album as it veers a lot from the stripped back country sound of many of the other tracks it is a great track. With more tracks still to come I think I actually would have liked to have heard a track listing that split up the Country and Southern Rock songs. Almost like an A and B side. For me that would have been a cool way to present the album. Steven’s second single ‘Red, White and Blue’ follows this up.

‘Sweet Louisiana’ almost seems to be pulling out a little bit of bro-country in Tyler’s record! It again has more of a poppy feel than some of the other tracks with the choice of melody and inflections used in the chorus but again that being said it is another cool side of Steven Tyler that we haven’t had the chance to see over previous years. The final original track for this album is ‘What Am I Doin’ Right’ and again one of my favourites from the album. Lyrically it is incredibly country and there are some nice vocal harmonies in the chorus which is set against a nice acoustic guitar backing. This track really utilises some of those vocal flares which set Tyler’s voice apart from any other you can listen which is really nice.

‘Janie’s Got A Gun’ and ‘Piece Of My Heart’ are the final two tracks on the album. Honestly I am a little confused at their placement on the album. Though ‘Janie’s Got A Gun’ has the story telling of a country track and has always lent itself to the genre the album has enough strong tracks on it without having to fall back on an Aerosmith track. The same goes for ‘Piece Of My Heart’. You cannot fault the performance or production of either track but for me they are filler tracks. Something you would do when struggling for tracks and with the grand total being 15 that clearly isn’t the case here.

Overall I was impressed by the album. Were there elements I didn’t like? Yes. For the most part because I felt they were unnecessary additions to either the album or tracks but that’s why music is a personal thing and what I didn’t enjoy could well be what sells the album to others. With the mix of tracks on the album it says to me that this will be Steven Tyler’s only Country album. Though clearly a big part of him I would be surprised for a second album of this capacity to be making an appearance anytime soon. I feel like he has achieved what he set out to do here and the conclusion of the album just says he is still a rocker at heart. You can take the boy to Nashville but damn you can’t take the Boston rock star from the boy!