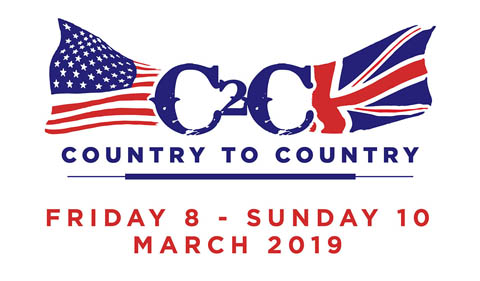 The first Spotlight Stage artists for Country to Country 2019 in London have been revealed. Catherine McGrath and The Wandering Hearts move into the arena after triumphant performances on the Festival Stages, while Abby Anderson, Caroline Jones, Fairground Saints, Jimmie Allen and Runaway June all play C2C for the first time.

Situated in the main arena, The Spotlight Stage hosts performances in between main artist sets. Many of the biggest new acts winning fans on American country radio and supporting major tours play the Spotlight Stage, giving fans the chance to see stripped back performances from some incredible up and coming talent. The Spotlight artists will join headliners Keith Urban, Chris Stapleton and Lady Antebellum.

Country to Country; Europe’s biggest country music festival is back at The O2 for its seventh year from Friday 8 to Sunday 10 March 2019. The festival also returns to the 3Arena Dublin and SSE Hydro in Glasgow. C2C London ticket holders will have access to daytime live performances and other live events. Further details to be announced.

Abby found a home at Black River Entertainment, where she landed both a publishing and a record deal. Her debut EP, I’m Good, captures all sides of the vivacious 21 year old’s personality. Pulling from her musical influences like Linda Rondstat, Aretha Franklin, and The Judds, the five song project exudes confidence and puts her soulful vocals on display. Officially coming into the spotlight in 2018, Anderson has already garnered several impressive accolades from the country music community. She was named one of CMT’s Next Women of Country and earned a slot on Pandora’s “2018 Country Artists to Watch” list. Abby spent the majority of the year opening up for artists such as Russell Dickerson and Chase Rice and wrapped up her year on the road with Devin Dawson and Brett Eldredge on the fall leg of The Long Way Tour.

Singer-songwriter and multi-instrumentalist Caroline Jones co-produced her album, Bare Feet with Grammy and Academy Award-winning producer Ric Wake. Upon release, Bare Feet rose to #16 on Country Albums Chart and #14 on iTunes Country Albums Chart. Rolling Stone named her one of the “10 Country Artists You Need to Know” and Billboard called her one of the “15 Country Artists to Watch in 2018”. Throughout 2018, Caroline toured with Jimmy Buffett and the Eagles, Zac Brown Band and OneRepublic, and Tim McGraw & Faith Hill.

Catherine McGrath is set to become the UK’s first international contemporary country star. The 21 year old Northern Irish singer songwriter has had twelve consecutive tracks featured on Spotify’s New Music Fridays playlist, and she’s already accumulated over 12 million streams. Widespread critical acclaim includes the backing of Sir Elton John, who praised her “extraordinary songwriting ability and an amazing voice.” That skill shines through in her forthcoming debut album ‘Talk Of This Town’. Recorded at various locations in Nashville and London, it affirms Catherine’s credentials as an artist and songwriter to be reckoned with.

The California-bred trio Elijah Edwards, Meg McAllister, and Mason Van Valin met by way of various social networks and Craiglist postings. Within two weeks of relocating to Nashville, they drummed up a palpable buzz and landed a deal with Sony Music Nashville. They had already earned acclaim from NPR, Huffington Post and more as early recordings “Can’t Control The Weather” and “Turn This Car Around” amassed millions of streams. Moreover, they toured alongside everyone from Brothers Osborne and Sara Evans to Scotty McCreery and Kip Moore, who, after hearing them for the first time, invited them to open for him. Touting a striking singular sound, they pave a musical highway between Laurel Canyon and Music City, finding a shortcut to universal bliss by way of country, pop, and rock.

Now signed to BBR Music Group’s Stoney Creek Records, Allen’s debut single “Best Shot” is a certified hit, claiming the spot as the No.1 most Shazamed song in the format for eight consecutive weeks, and claimed the No.1 spot on Country radio, marking the first time a black artist has launched a career with a No.1 hit on Country radio. In October, Allen released his hotly-anticipated debut album, Mercury Lane, named in tribute to the street he grew up on. Featuring a cutting-edge mix of Country, rock, R&B, and pop, Mercury Lane draws upon the influence his family and small-town upbringing of the critically-acclaimed rising star.

Rootsy, brightly coloured and mixing bluegrass tradition with dusty desert cool, Runaway June is comprised of three very different women who fuse their own influences to create a style country fans have been craving. With their debut single, “Lipstick,” Runaway June became the first all-female trio in over a DECADE to score a Top 25 hit. With the help of the trio’s follow-up Top 40 single “Wild West” the breakout trio earned a 2018 ACM nomination for “New Vocal Duo or Group of the Year”. With their current single “Buy My Own Drinks,” co-written by Runaway June and Hillary Lindsey and Josh Kear, the trio is primed to cement their identity as one of the best new groups in the genre.

London alt-country, folk & Americana quartet the Wandering Hearts followed in the footsteps of Ward Thomas, the Staves, and the Shires as part of the vanguard in the new British Americana scene of the mid-2010s. Signed to Decca Records, their debut album Wild Silence is out now.