The launch party of Southern Junction’s debut EP – Running Out of Time was a double edged sword. It was a celebration of the release of their EP, but it was tinged with sadness as Katie Jayne has to fly back to her native Australia on Monday, so it was also a farewell party. It is not however their last gig as that is on Saturday in Winchester when they support SaraBeth and Glen Mitchell, who have flown over from the US for a UK tour.

The Venue is a little out of the way, but is lovely. There is a garden bar on street level, you then go down some steps to the actual venue. Inside it is on a split level, there are some tables & stools upstairs & downstairs there is the bar & the stage. It is a lovely venue, small without appearing cramped & because of the split level there is a high ceiling over the stage so the sound quality is really very good.

Kaity Rae started the evening. The start time was delayed for about half an hour as there really were not very many people there and it was hoped that by delaying the start time slightly more people would show up. A few more people did, but not many!

The title track of Kaity’s EP This Time Around was the 1st track she played, followed by Back In My Heart, also from her EP. She then sang Up In Smoke which she had partially written, then went to Nashville and was inspired to finish it! Next was All That I Am, there was then a slight pause as Kaity had a few issues with her guitar, but she quickly got it sorted and Already Gone was next. This was quite a powerful track & Kaity said that she had written it with Carrie Underwood in mind, so the next time one of us spoke to Carrie, please could we tell her Kaity has a great track for her!

The next track was a cover – Justin Beiber’s Too Late To Say Sorry, gotta admit, I didn’t know it was a Bieber track & I quite enjoyed it! Don’t know if I would have enjoyed it any less or any more if I had known!

The final track from Kaity’s EP was her last track. Before I Knew, is also her latest single and it was my favourite track of hers, both on the night and having listened to the EP. 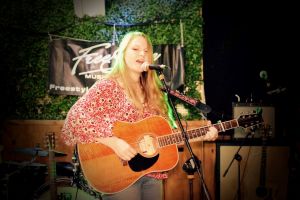 Next was Oceanside. This is made up of Sam Horton and Lee Rascall Dove. I am going to apologise to the boys now, I have done some research, but I can’t really find much out about them, apart from the names and they are from Bournemouth, so if I get the track names incorrect, please forgive me!

They started with We Light up the World & it was a good upbeat track to start on. This was followed by a cover of We Don’t Have To Take Our Clothes Off originally by Jermaine Stewart. They then slowed things down with one of their own tracks, Sleep Walking. Next was a song Lee has written – Where Were You followed by No Tomorrow. They then sang the 1st song they ever wrote together Never to Live, which was followed by a McFly cover, Shine a Light. This was fun and by now they had a crowd of friends who were dancing and singing along, adding to the great atmosphere. They finished with a mash up of 2 songs which again, really sorry I didn’t recognise & finally a cover of Paramore’s Misery Business. 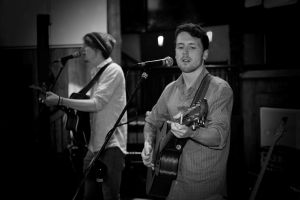 These guys have a good sound and some very supportive friends. I am hoping for more gigs on the south coast, so hopefully these boys will appear again.

Next up, fresh from FSA Fest in Newark we had the wonderful Acoustic Journey. I say ‘fresh‘, for those who were at the festival, they will realise I am being tongue in cheek as Jonsey (Andrew Jones) and Ben (Guerney) got totally wasted Saturday night and were conspicuous by their absence all day Sunday when Andy Sammons was the only 1 of the 3 to make an appearance! Fortunately they had played on Friday, so were not due to perform and thankfully they have now recovered, although they both said they still felt ill on Tuesday!!

Acoustic Journey started with a cover of Zac Brown Band’s Chicken Fried. Jonsey dedicated it to Katie Jayne as she had requested it! When they finished Katie was taking a selfie with a friend, with AJ in the background, Jonesy and Sammons immediately shut up & posed with thumbs up!! When they had finished posing they went into Drive, after which Jonsey pointed out he was 7 beers in, obviously NOT learnt his lesson from Saturday, but then their Manager from Real Good Records, Mike Jones was driving!! 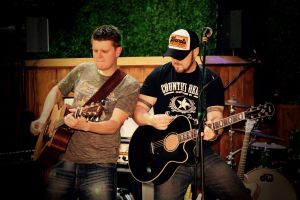 Trucks and Whiskey was next, then You & Me, British Summertime and Real Good Feel Good. Get Back Up finished their set – or did it?? The crowd were whooping & hollerin’! As a result Katie signalled to them to do one more, which they obviously obliged & did a cover of Home Sweet Home, by The Farm. As usual Acoustic Journey’s set was superb, I have reviewed these guys before and don’t really want to rehash old ground! I will say these boys are really good friends and it shows with their performance. Even when Ben & Jonsey were drunk at FSA they managed a superb cover of Brantley Gilbert’s Small Town Throwdown at the After Party with Andy S on a full drum kit rather than his usual Cajon drum!!

It was then the turn of the main act & the whole reason we were all there, Southern Junction. Normally Southern Junction is Katie Jayne and Carlos Heath. They are frequently joined by Andy L Smooth on guitar, but tonight they were also joined by Chris Payne on keys, Scotty Farron on bass and the legend that is Justin Johnson on drums. Again Katie, Carlos and Andy were fresh from FSA Fest, Justine was also at FSA Fest when he played drums for three straight sets!! He played for Narn, then for Thorne Hill and he then stood in for Ricci Riccardi with Jess & the Bandits. He is also a producer! A busy boy with several hats!

They started their set with Lady Antebellum’s Need You Now. Katie then said they were going to play their EP in order and played Inescapable and then Crazy. With Crazy, not only were several member of the audience joining in singing, they were also doing the hand signals with Katie, it was fun watching.

Next was I Want To, which I think sounds very much like a Lady Antebellum number, you can almost hear them singing it! The title track of the album Running Out of Time followed. This track is quite poignant bearing in mind the EP was released literally a week before Katie has to go back to Australia! The last track from the EP is simply called Song 5 – they ran out of time to name it! Not really! 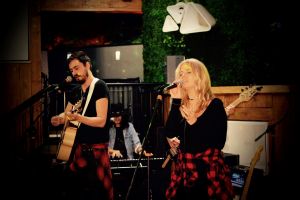 They then called up a special guest, another guy who played FSA and blew the audience away with his rendition of Chris Stapleton’s Tennessee Whiskey. Yup, Darren Hodson joined them on stage. Carlos and Andy make no secret of the fact that they love Darren & his band the Southern Companions, they have a real band crush! Katie left the stage & left the boys to it. They had rehearsed Southern Companion’s song Crash, you could see Darren was a little nervous as to how this was going to pan out as he hadn’t rehearsed with them and he hasn’t played with them before at all. They started and you could see Darren fears rapidly disappear. The boys did real good, it sounded absolutely great. At one point Darren seemed to start & took a quick look around at the guys & his face split into the widest grin it was almost difficult for him to sing. When they finished the number (& got a HUGE round of applause) Darren explained why. He said not only had the guys nailed it, they had also learnt & sang the harmonies, something his own band haven’t even done!!

Darren then left the stage a very happy chappy! Katie came back & said “This is our last song”. To which Carlos said “No it isn’t”. Katie said “Shh, yes it is!” To which Carlos said “Whoops, yes, of course it is our last song!” All very hush hush, nudge nudge!! Very funny. They sang The Shires Statelines. They then thanked the audience, but by now we all knew they had at least one more song, so we were not going to let them go without singing it. They finished with Carrie Underwood’s Before He Cheats. It was a really good cover, very up tempo & sung with passion. During this track Katie introduced the band & they all played a little bit solo. The track was so up beat infact that the chap standing next to me with long hair, wearing a long leather coat & spurs on his boots, started head banging!! Gotta say, 1st time I have ever seen someone head banging to a country act! Love it!! 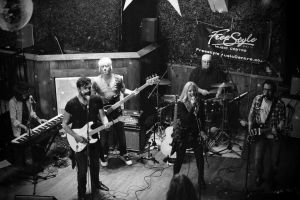 It was the first time Southern Junction had played live with a band and I for one thought it was fabulous. I really do not think I was the only one as the audience went nuts for them! It was a great gig and once again, you really felt as if you were with friends. I cannot BELIEVE Katie has to go home, just as things really seem to have taken off for them! I really, really hope their EP sells well & they get flooded with offers and Katie comes back. This is another act where they people have become friends, not just performers!