At The Musicians Hall Of Fame
(Hosted by Stacy Widelitz) 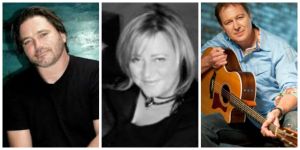 There are some events you go to that make an impact on your life, I feel totally blessed to have been invited along.

The music was outstanding, the songwriters were fantastic and treated us to songs they had written for the likes of Tim McGraw, Jake Owen, Jason Aldean, LeeAnn Womack, Willie Nelson & Merle Haggard and Patrick Swayze and the stories behinds the songs.

But… Linda and Jessica (the sassiest 14 year old girl I have ever met) are both cancer survivors and they hosted the show and listening to them sharing their stories were so moving, funny and inspiring.

The inaugural event is hosted by Stacy Widelitz, acclaimed co-writer with Patrick Swayze of “She’s Like The Wind,” from the multi-platinum “Dirty Dancing” soundtrack.

“I am honored to bring to the stage these amazing songwriters on behalf of the Women Survivors Alliance. The proceeds from this concert will benefit so many cancer survivors around the country. For me, this is a way of giving back and honoring my friendship with Patrick, who was taken from us way too early by pancreatic cancer,” says Widelitz.

This first-time event benefits the Women Survivors Alliance and will feature unplugged acoustic performances by some of Nashville’s top songwriters.

Stacy Widelitz started composing professionally at nineteen, but came to prominence with the song “She’s Like the Wind,” co-written with Patrick Swayze and featured in Swayze’s blockbuster Dirty Dancing. Featured on the movie’s wildly successful soundtrack, it reached no. 3 on Billboard’s top-40 chart (no. 1 among adult-contemporary radio listeners). He has scored features, more than twenty made-for-TV movies, written the end-title song for Disney’s Pocahontas II, and was nominated for an Emmy for ABC’s World of Discovery. Stacy also wrote the title song and scored all the episodes of ABC’s acclaimed animated series Cro, and scored and composed much of the dance music for the film One Last Dance, which garnered him a Best Music Award at the 2004 Nashville Film Festival. He subsequently joined the board of directors of the festival, serving as board president from 2007 – 2009. Stacy served as president of the board of Grammy-nominated ALIAS Chamber Ensemble, and he is currently on the boards of Nashville Opera and Leadership Music. Stacy was recently elected to the City of Oak Hill Board of Commissioners, thus beginning his political career.

“If you’re going to hunt tigers, you have to go where the tigers are”. It was that bit of advice from music publisher Si Siman that convinced Tim Nichols to leave Springfield, Missouri for Nashville, Tennessee in pursuit of a music career.

Now with nearly two dozen smash hits, multiple BMI songwriting awards, a Grammy for Best Country Song for Tim McGraw’s “Live Like You Were Dying”, as well as Song of the Year honors from the Country Music Association and Academy of Country Music, Nichols has earned his place among Nashville’s most elite and respected tunesmiths.

Nichols’ songs have helped launch the careers of Jo Dee Messina with her debut smash, “Heads Carolina, Tails California”, Chris Young with “The Man I Want To Be”, as well as newcomer Dustin Lynch, who along with Nichols and famed record producer Josh Leo, wrote his breakout hit, “Cowboys and Angels”. Most recently Nichols’ songs can be found on the follow up Dustin Lynch cd, “Where It’s At”, the current Jason Aldean project, “Old Boots, New Dirt”, as well as the new single from Jana Kramer, “I Got The Boy”.

Feeling the importance of giving back to the community and the industry, Nichols has served on the Board of Directors of the Country Music Association, the Nashville Songwriter Association International, and the High Hopes Development Center, a therapeutic preschool which serves children with special needs in Nashville and surrounding counties of middle Tennessee.

When not on Music Row in pursuit of the next hit, Tim enjoys finding inspiration by traveling with his wife Stacie. Out of their travels Nichols developed, “From A Songwriter’s Camera,” a collection of images that speak visually with the same heart, intensity and voice as his songs.

“Taking a great photograph uses many of the same creative muscles as songwriting”, says Nichols. Whether visually through photography or sonically through music, Tim Nichols loves “the process of creating” and looks forward to images and songs yet to come.

A SURVIVORville favorite for two years in a row, Dylan Altman returns to a WSA stage, this time at the Musicians Hall of Fame. Originally from the great state of New Jersey, Dylan has been writing songs and performing in Nashville for 18 years. He has had three #1 songs: Tim McGraw’s “Watch The Wind Blow By,” Jake Owen’s “Barefoot Blue Jean Night” and most recently Jason Aldean’s “Take A Little Ride.” Other artists who have recorded Dylan’s songs include Trace Adkins, Will Hoge and Gabe Dixon. He is an avid supporter and volunteer for Musicians On Call, an organization that provides live music for patients in area hospitals, and he co-hosts an annual benefit for JDRF (Juvenile Diabetes Research Foundation) with good friend and frequent collaborator EMI Records Nashville recording artist Eric Paslay. His proudest accomplishment is his beautiful daughter Isabella, who serves as his greatest inspiration. *Dylan’s performance will be in honor of his great friend, Joanna Montgomery.
Clint Daniels, #1 Songwriter

Clint Daniels first gained an interest in music as a child, singing with his family in church. Inspired by bluegrass music, Daniels taught himself to play guitar at age twelve. After graduating high school, he moved to Nashville, Tennessee in pursuit of a career in country music. By 1998, he was discovered by an A&R staff member from the Arista Nashville label, and was signed to the label that year.

His self-titled debut album was released September 15, 1998. It produced two singles, “A Fool’s Progress” and “When I Grow Up,” which respectively reached #44 and #53 on the country singles charts. Daniels left Arista shortly afterward, signing to Epic Records in 2003. Although he released a third single, the #56 “The Letter (Almost Home),” he never released an album for Epic and has not recorded since.

Daniels has also co-written songs for other country artists, including the Number One hits “Brokenheartsville” by Joe Nichols and “Roll with Me” by Montgomery Gentry (from 2003 and 2008 respectively), as well as Brooks & Dunn’s 2008 single “God Must Be Busy”. He also co-wrote two songs that were released in late 2010: Clay Walker’s “Where Do I Go from You” and Easton Corbin’s “I Can’t Love You Back”.

Marla was raised in Kingston Springs, Tennessee, where she had a front row seat for country music history as she watched her father, Buddy Cannon, shepherd the careers of new and legendary artists as a producer, songwriter and record label executive. Now, she has earned her own place as one of country music’s most-beloved and respected hit-makers.

To get her first gigs, Kalie Shorr walked that fine line between persistence and harassment. To pay the bills and leave her mornings free to write songs, she landed a job in one of Nashville’s famed Lower Broadway honky-tonks selling hot dogs and cigarettes. To make connections, she had to go out on a limb. Kalie admits, “I didn’t know where to start. I had no idea. I would just walk up to people and give them my business card and be like, ‘do you want to write with me?’ And they were like, ‘No.’ Nashville is friendly but it’s hard.”

The new girl in town would eventually find a home at a new Nashville tradition. In 2014 she was part of the first show of the Song Suffragettes, a weekly live show featuring a rotating group of all female singer-songwriters. The second show even featured Kelsea Ballerini before her first #1 single was released. “It is such a great community,” says Kalie. “When you’re on stage, you might feel a little more equal than you might actually be. I don’t know where I would have been without it.”

It was during a Song Suffragettes set that an intern for SiriusXM first heard a performance of “Fight Like A Girl,” a song written with fellow performers Hailey Steele and Lena Stone. One pitch meeting later, Kalie’s first radio single was added to The Highway’s weekend show “On The Horizon” as the “YouTube Country Spotlight.” A few weeks after that, it was chosen as a “Highway Find,” starting Kalie down the same breakout path of signed artists like Sam Hunt, Cole Swindell, Clare Dunn and Florida Georgia Line.

Growing up in Cleveland, Ohio, Suzi never imagined she would fall completely in love with country music. Pam Tillis, Shania Twain, Garth Brooks and Dolly Parton just to name a few! And even though this may seem random to be included in that line-up, Britney Spears! Ever since she was 8 years old, music has been Suzi’s life.

Growing up in Cleveland, OH I never imagined I would fall completely in love with country music. Pam Tillis, Shania Twain, Garth Brooks and Dolly Parton just to name a few! And even though this may seem random to be included in that line-up, Britney Spears! Ever since I was 8 years old, music has been my life. I started playing the guitar and writing songs back then and I’ve been addicted ever since!

Songwriting is the perfect therapy for Suzi. After she lost her mom to pancreatic cancer in March of 2007, Suzi realized how short and precious life really is, which was a huge part that fueled her fire to make the solo move to Nashville to pursue my passion.