Warning this isn’t Country Music…. But we love Zac Brown Band and wanted to share!

Having loved Zac Brown Band’s latest album Jekyll & Hyde with the more experimental tracks like Beautiful Drug, Heavy is the Heart, and Junkyard I was excited to hear that a side project had been created by Zac Brown to further this style and let the band go back to their roots. Sir Rosevelt was born with co band members Niko Moon and Ben Simonetti.  Brown has been working with Moon for ten years and they are frequent co-writers and Simonetti engineered Jekyll and Hyde with the  Zac Brown Band. The three of them co-wrote ZBB’s first single ’My Old Man’ from their new album. Sir Rosevelt outed themselves on 30th September with the release of the video Sunday Finest, a gloriously funky blend of disco, blues and jazz with a pumping bassline. 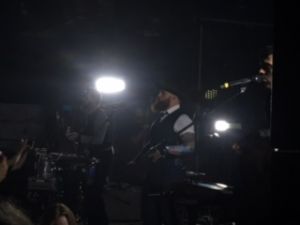 Following the announcement that ZBB would headline C2C 2017 came the confirmation that Sir Rosevelt would appear at Scala in Kings Cross.  It must have been some time since Zac Brown has played at such an intimate venue. Apart from Drake White and The Big Fire, this was the gig I was most looking forward to and it did not disappoint.

They were supported by singer songwriter Nikhil D’Zouza from Mubai, India. He played an acoustic set, interacting very well with the audience telling us this was his first time in England and that he met his band members on Saturday for the first time.

At 21.15 the screen at the back of the stage started playing the introduction to Sir Rosevelt, and by then Scala has filled up to capacity so they came on stage to a packed venue.  Wow!  It was an audio visual feast for the ears and eyes. With hip wiggling and hair whipping sexy dancers dressed in Kylie style silver hot pants and platform shoes  trumpet and trombone players.

It was decadent, colourful, sexy and hot. At some point you could imagine that you were in fact in a club in Ibiza and not a gig venue in Kings Cross

They finished off the hour long set with a rip roaring Sunday Finest if I hadn’t been so tired from C2C festival I’d have wanted to go to a club to dance the rest if the evening away.