Performed by Angels With Dirty Faces 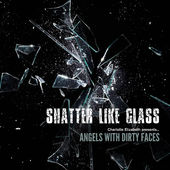 Co-Written by Charlotte Board and Stuart Landon

Shatter Like Glass is the first single to be released from Survivor, an album coming to us by Charlotte Board. Charlotte is well known within the UK Country Music scene, but more for her work behind the scenes with bands like the Ash Cooper Band. She has however been busy writing her own songs and with the help of Matthew Bishop (music producer and one third of the band Honey Ryder) Survivor has taken shape and gathered form. The album will feature many well-known UKCM artists.

Released on Friday 14th October, Shatter Like Glass debuted at No 4 on the UK iTunes Country Chart, held back from the number 3 spot by Forever Country, the CMA Anniversary song. (The Shires were no 2 with My Universe & No 1 was Dolly Parton’s Jolene – are people seriously still buying that single? After all these years? Wow!)

Stuart Landon from Angels With Dirty Faces, has quite a raw sounding voice, which lends itself really well to this song. It is a slow track with both powerful words and theme, I find it quite poignant that it is sung by a man, it is the sort of track you would normally associate with a female singing. The song itself is about heartbreak, picking yourself up, turning your back and walking away, but with dignity & hope in your heart. If you haven’t experienced this sort of feeling at least once in your life, then you must be very young or lucky enough to have got this far without having your heart broken!

This single is a very promising insight to Survivor and it certainly leaves me wanting to hear more from the album.

Chatting with Ben Earle (The Shires)