Interview with SCOTT BROWN of the SCOOTER BROWN BAND 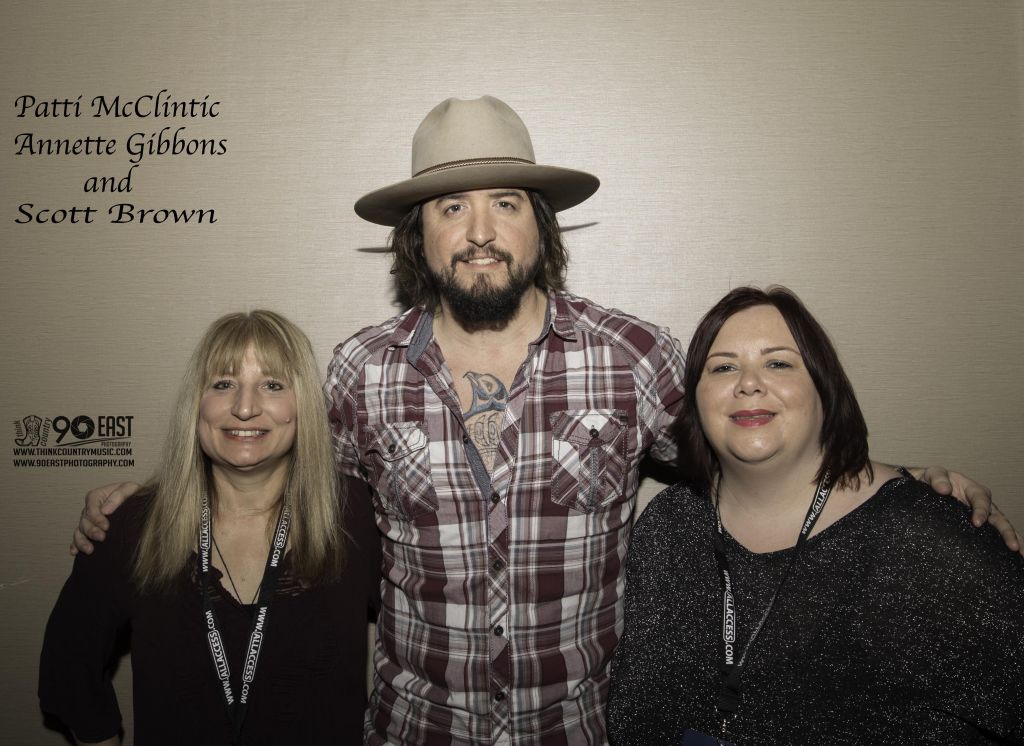 CRS interviews are often conducted in tiny curtained off areas that don’t allow for more than a few people at best to fit comfortably, so many times, one person will sit down and represent larger bands.  In the case of the Scooter Brown Band, lead vocalist and guitarist, Scott Brown showed up to do the talking with us, and we found that when you mix a Brit, a native New Yorker and a country rocker, you get some good conversation.

Asked initially to tell us about himself, Brown replied, “I’m 6’3”, brown hair, I like long walks on the beach, puppies…”  We now knew we liked this guy, he had a sense of humor.  He then went on to tell us he was originally from Colorado, entered the Marine Corps and went to Texas, was in Texas for a while and moved to Nashville about two years ago.  We asked him what kind of guy he was and he quickly answered, “I’m a straight shooter, call a spade a spade kind of guy.”

As for his music?  “Scooter Brown Band is a rock and roll band with a country problem.  We’re more on the southern rock side of things.  If people like Whiskey Myers or Blackberry Smoke, we’re along that style.  We do a lot of tour dates with Charlie Daniels, Marshall Tucker Band, Travis Tritt, The Outlaws, proper country.  We do about 120 dates a year out on the road.  There’s five of us in the band.  My drummer has been with me since day one, and that’s Matt Bledsoe.  Our bass player, Steven Sutherland, is actually from Aberdeen, Scotland and moved over to Texas and I met him, and he happened to be a musician and fell into the band.  Nathan Lockhart is our guitar player and Carrigan Shields is our keys player.  I’m the front guy, but we operate as a band.  We win together, we lose together.  It’s not all about me.”

Naturally, we wondered how the band got its name.  Scott Brown/Scooter Brown.  One can’t help but notice a similarity, so we had to ask, as I’m sure most people do.  Did we detect a slight rolling of the eyes on Brown’s part?  Maybe a touch, but I’m sure he’s accustomed to the question and answered without hesitation.  “That was actually a joke when we first started because I hated being called ‘Scooter’.  When I was in the Marine Corps, my buddies would call me ‘Scooter’ and I would HATE it, like I would choke somebody out over it, you know what I mean?” “But now you’re fine with it?” “Yeah, it just is what it is.  We booked our first paying gig, me and another guy with a guitar, and we didn’t have a band name and they needed a band name to advertise, and my buddy told them to put ‘Scooter Brown’ on it, so we pull up to the venue that night to play, and the sign says, ‘Live Music Tonight by the Scooter Brown Band’, and I was like, ‘You son of a….’, and then a bunch of people came out to the bar and people started to call wanting to book the Scooter Brown Band.”  “Then it stuck?”  “Yeah, that’s it.”

Now that we knew about HOW the Scooter Brown Band came to be, we needed to know what was going on with it right now.  We asked about current music.  Brown told us all about that.  “In the fall we released an album called ‘American Son’.  Charlie Daniels actually sings on the title track to that album.  It’s pretty awesome.  There’s 13 songs on it, I wrote 12 out of the 13.  We covered the 13th song, and that’s a Charlie Daniels song from his ‘Fire on the Mountain’ album.  We’re in the middle of writing for the next one.

Always interested to know about who plays on records, I asked if the band played on “American Son” or if session players were used.  Brown replied, “No we play our own.  I’ve got this thing.  I have nothing against session people or anything like that, but my thing is, we’re a band, and I want everyone in the band to have a piece of the art, because why would you want to play somebody else’s lick on stage?  Hey, some guy made up this guitar solo and this is what you have to play on stage.  As an artist, that side of you, you want to be creative, and when you play that part on that, you created that, and you want to play it the best you can on stage.  Besides that, what you hear on our record, there’s some female background vocals that you won’t hear live, but I just wanted to have a Skynyrd feel to it, but besides that, what you heard on the record is what you get at the show.”

Annette and I both agreed that we enjoyed that concept and Brown went on to say this, “I think the cool thing about the live situation is it’s such a different experience than the record.  Even though the sound is the sound, and that’s what you’re gonna get when you come to the show, we don’t ever play anything the same.  We always go off on little tangents.  I’ll look at the guys.  If the crowd’s diggin’ what we’re doin’, I’ll look at them like, ‘Let’s jam something’ right in the middle of the song”.  We gave our Think Country nod of approval and Brown continued, “It will always be different.  I think we’ve lost the art of rock and roll and it just being the show and it’s just about the music, and not so much about the lights and the everything else.  Just go out there and play.”

We chatted about the single “American Son”, which by the way is a MUST HAVE.  (I started off by downloading this song and immediately went and found every other song I could by this band.  Was that just a mini review?  If so, all apologies for comingling interviews and reviews, but if ever a band deserves it, this is it.  I digress…  Brown mentioned that the single is out on streaming platforms, but it is not out as a radio single.  (At the time of the interview, I politely listened to that information, now having the music and all the lyrics memorized, I can shout loudly to the Heavens, “WHY?!!!!!!”)  Back to our regularly scheduled interview…

We then went on to discuss the reason WHY the single isn’t on radio, and it all gets down to format.  Brown explained, “We would like to have a radio single, but we just have to find the right song.  With a record like this there are probably two or three songs that fit country radio format. We’re enough country, that we could stay relevant, like Blackberry Smoke or some of those guys.”  Annette was quick to point out this, “Like Cadillac Three, over here, it’s taken them a long time.  Over in the UK, they are so popular.  They play them on both country and rock radio and they sell out venues in minutes.  We’re not so pigeon-holed.”  Brown responded, “We’re actually working on that.  Some buddies of ours, Whiskey Myers, they went over there, they opened for Cadillac Three and Blackberry Smoke and they’re selling out their tours eight months in advance now over there, it’s crazy.  We absolutely want to go over to the UK because we see what’s going on with southern rock there and the coolest thing about it is those guys will all tell you, the fans over there aren’t there to get drunk and get laid, they’re there to watch music.”  Annette pointed out that UK fans are often quiet, which can be misconstrued as being bored, when actually they’re just really, really into the music and rather than yelling and screaming, they sit quietly and take it all in.  Just a different form of appreciating it.

We then moved on to a fun question we were asking artists during CRS.  It seems Nashville is experiencing a celebrity restaurant/bar boom these days.  If the Scooter Brown Band were to open one of these, what would they call it, and what would the theme be?  Brown had one of the very best answers to this question, if not THE best of all.  “I would call it VALOR.  I would call it VALOR because, it’s kind of crazy but, I don’t know if you guys are aware of who Chris Kyle was?”  (Yes, absolutely, we were all very aware of who Chris Kyle was.  Kyle was a United States Navy SEAL Veteran and Sniper who was tragically murdered at a shooting range in Texas by Eddie Ray Routh in 2013) Brown went on, “Chris was a friend of mine and two records ago, I’m actually not a fan of the record, but the song, the title track, ‘Valor’ is really good, and Chris helped me co-write it.  It was based on a conversation we had in a bar in Colorado and the guy was trying to sell us his bar.  The guy thought Chris and I were a couple of big shots and we were just a couple of dudes trying to pay the rent every month you know?  So, we told him, ‘Yeah, we’ll have our people call your people in the morning’, and Chris and I were just shootin’ whiskey and drinkin’ Coors Light.  So, I’d look at Chris and say, ‘Hey man, what are we gonna call our new bar?’ and he goes, ‘We should call it VALOR to pay homage to all of our brothers and sisters that served in combat.”

Without exaggeration, that brought our photographer Bill to tears, gave me chills and caused Annette to say, “I think that’s where we end this interview.”  We didn’t need to go any further because we didn’t have to.  That was not only the most interesting answer to that question.  It was the most authentic, the most patriotic, the most beautiful and the one that we all wish would actually come to fruition one day.

You can find the Scooter Brown Band: