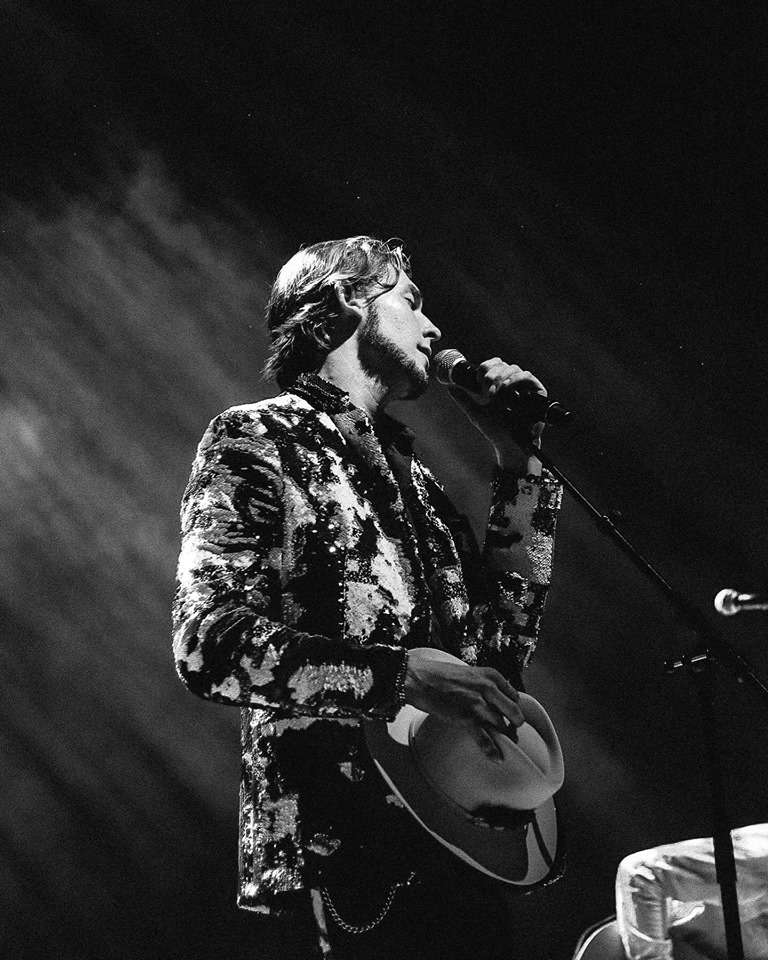 Sam Williams has never been to London before, and he quickly informs us of this before dropping into his latest single, the moody, haunting ‘Gemini’. Goosebumps up my arms, first of many. It’s his voice, a perfect fit for such melancholy. His brutal vocal tone accentuates the song’s resident agony with proficiency and sensitivity. Vibrato, rasp, power, falsetto; he has it all, and uses it adeptly across all of his regrettably short set. It’s clear he’s the star of his show.

As much star power as Williams radiates, with his jacket so shiny and his voice so cutting, it has to be said that his lone band member was certainly pulling his weight, allowing the vocalist to place his full attention on exhibiting his songs to the crowd. A great choice was made in this talented instrumentalist, who very much makes the most of his limited support slot instrumental palate, where a trusty loop pedal does the heavy lifting. He does a magnificent job of translating those electric guitar solos into an acoustic guitar, resulting in another round of goosebumps when Williams covers his father’s song ‘Weatherman’, a 1980s deep cut that slots right into his repertoire. Given this assessment, I’m very pleased he’s announced it as his next single, out this week for streaming.

Not every support slot is blessed with a majority of the crowd in attendance, but I guess that’s a testament to the ticket buyers and their trust in Cam’s choice of artist to represent her. Even the most attentive fan here can only know so much about Williams, given his lack of previous trips to England and his minimal amount of available material to sample on Spotify. But here the crowd are, bright and early, attentive and interested. He tells us his story of convincing Cam to let him join her tour, which matches Cam’s more detailed retelling later on. It’s clear there’s an artistic connection between the two. They both see the potential each other has, and they both see what each other has managed to master so far in their career. It’s inspiring to hear touring artists speak so highly of each other. This isn’t some soulless industry match-up, this pairing comes from creative intrigue and belief in one another’s abilities.

The last chorus of his set was a capella; a masterful move. The note left ringing through the beautiful o2 Shepherd’s Bush Empire was one of his timeless rasp, definitely his strongest asset going forward.

As a taste of what is to come with forthcoming sophomore album, A...

The Music of Randy Travis 2019 Tour