The South Dakota-born, Nashville (via-LA) based singer songwriter played the Grand Ole Opry stage for the first time on Friday (3rd May) 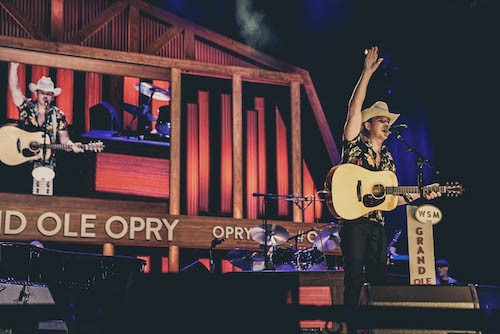 He’ll also be bringing his unique brand of SoCal Country back to the UK & Europe in September, including an appearance at The Long Road festival – tickets available for all shows now:

Working as an advertising executive in his twenties, he performed small bar gigs near his home in Los Angeles starting in 2009 but kept his marketing career until 2015 when he finally left his job to become a full–time musician. Turns out that was a good decision.

At age 33, Sam released his debut album Angeleno in 2015. Produced by Ry Cooder and Joachim Cooder, Angeleno introduced Sam as a distinctly assured voice in the Country and Americana scene. The album garnered awards and critical acclaim from Rolling Stone, American Songwriter, NPR and countless others. His follow–up album, Tenderheart, gave Outlaw his first foray into self–producing and further evolved his “SoCal Country” sound by introducing more elements of Pop and Rock music. Also a critical success, Tenderheart was heralded as one of the year’s best country albums, supported by a full tour of North America and dozens of shows in Europe.

With new music planned for 2019, Sam recently moved from LA to Nashville with his family, and made his Grand Ole Opry debut on May 3rd.

TC in conversation with LANCO after their first headline show in ...