Kate from Think Country sat down with Ryan Hurd ahead of his London gig with Maren Morris. 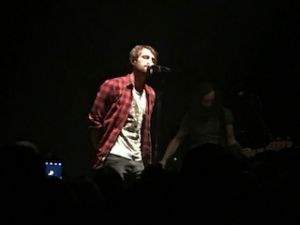 TC: How are you enjoying over here touring with Maren?

RH: Its great and really cool to see fans of our kind of country music here.

RH: Just like, what people are doing in Nashville. Someone told me when I got here that ‘country’ travels and I find that really interesting to see that. The crowds are very different to US crowds, but they are also much more attentive, in a cool way, its really awesome.

TC: Most of us do not like people talking in gigs.

RH: You know it goes both ways,  they are a little louder in the States and they also like the songs they know. Over here you can play new stuff and people are very attentive and that’s really cool.

TC: In the US it’s the hits on the radio that the crowds know, whereas we stream or buy the whole album. When we go to a gig we usually know all the words to the tracks played, even if they have been released the day before a gig.

RH: Exactly, its special and very cool for artists.

TC: So I understand that you originally intended to be a songwriter, did you always want to be a singer or was it never on your mind?

RH: I turned down some good opportunities to do this, I had a lot of people wanting me to take a stab at making my own albums but for some reason I didn’t want to tour, maybe that’s the reason? I do not know really, at that time I just wanted to be a writer. I loved that, I still love that, its still a huge part of my life writing songs for other people.  I’ve been on some huge projects, had some success on the radio. This is a new thing, it kinda organically happened. It’s  not like I stumbled in to it, but also it’s not as if I was calculated about it. I just decided to make an album and started doing that  then Sony jumped in kind of half way through the process and now we are here.

TC: Do you know when your full album will be ready for release?

RH: No, but we are going to go finish it next month, no I am sorry,  in January we will be finished. I’ll know a little but more at that point. It’s kinda cool how I have toured with Florida Georgia Line, Thomas Rhett, Maren and I’m going to tour with Dustin Lynch.

TC: Did you manage to see Thomas and Old Dominion shows over here whilst you are here?

RH: No, we were playing in Dublin (I think). But its nice to tour that much off of four little songs, most people have to wait but maybe it’s the cart before the horse, but I feel that we already have quite a fan base.

TC: With other genres of music its rare to see a large audience for the support act but for country music the gigs are usually full. Last nights gig (TC3 and Bros O) was absolutely packed out.

RH: Really, I just thought that everybody turned up on time! (Laughs).

TC: No, the fans were queuing from 12 lunchtime yesterday. I was at the sound check for TC3 and there were fans already staking their place.

TC: We love a queue!

TC: Do they not do that in the US? They stand there with their chairs and when the gates open they run?

RH: That’s for festivals, yes. Someone tweeted me that they were queuing and I had no idea what they were talking about. Then I figured it out. Someone invited me to Nandos, offered to buy me chicken before they queued. I did not know what any of that meant…then I saw a restaurant called Nandos and I worked out that queueing is standing in line. That is a way better word than what we use.  Whatever, it was cool? Lucie (Silvas) loves Nandos. 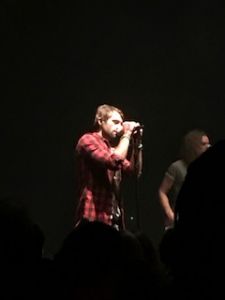 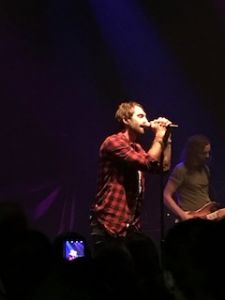 TC: Can you choose who you write with?

RH: Yes, a lot of the people that I write with are people that I am friends with so we cultivated a creative partnership. I feel like I have written with everyone in Nashville. Its cool to be in that community.

TC: Apart from your own songs what is the favourite song that you have written for other people?

RH: Man, that’s hard as you love them for different reasons.  Probably ‘I’ll be the Moon” for Dierks Bentley that Maren sung on.  I put it on a little songwriter EP that I made called  ‘Panorama” and the I had  to take it off because Dierks recorded it and you know  it never became a single or anything but I’m really proud of that song.

TC: It is a lovely song.

RH: I love my version of it too. Some day I’ll put it out. Maren sung on that one too.  Its was weird when Dierks said to Maren, I’ve got this song and she said ‘oh I’ve already sung on that before’, but it’s a cool song. Obviously, the hits are cool, they are special for a load of different reasons. It gets you a lot of notoriety, they are your favourites just because they are successful. I love just getting to do this for a living, it’s really cool. You know on the hard days when you’re jet-lagged and hungover you still don’t have a real job. I’m really proud of being part of the music community in Nashville and getting to tour and write songs. It’s a really great thing.

TC: Who looks after your dog, June when you are both touring?

RH:      Ah man, I haven’t seen our dog for a month, she goes to a trainer she goes to a farm and probably has more fun than when she is with us. She’s fine. We will see her in a couple of weeks. We will go back for Thanksgiving then we have a couple of days off in Nashville. That will be very cool. I always love saying ‘a couple of days off in Nashville’. They don’t happen very much. It will be great.

RH:        That’s interesting we listen to so much pop music at the moment as it’s such a great time for pop music. So that’s been cool to dive into that world a little bit. Honestly to just still to listen to our friends music. It’s really inspiring to be part of this community. Even the songwriters that we work with. Listening to the stuff they are coming up with ‘holy shit’ I can’t believe that we get to listen to this and no one else has, we are maybe one if eight people that have heard the song. It’s a really cool time in country music as it’s almost like sonically it’s almost genre-less.

RH:     If you just read the lyrics of his album, it’s a very country  album. It’s brilliant an an amazingly, amazing album. But it’s really cool to be part of that.

TC:    If you want to keep young people interested you’ve got to stuff that they’re interested. As they mature their tastes will change. You have to keep it fresh an up to date.

RH:    Yes, exactly, it doesn’t have to sound like it did in 1960. There’s a lot of traditional stuff that’s very rooted in that and that’s great. There’s also a lot of creativity happening within the constraints but it’s also cool. It’s cool to see what people come up with. At the end of the day music, whatever playlist you stream it’s really cool, I hate to even say genre-less as the lines are so blurred. It’s really cool for someone that’s creative to realise that.

TC:       Is there anyone that you’d like to collaborate with that you haven’t had the opportunity to?

RH:    I get to write with a lot of people, I’m really blessed. But collaborating us different, right? Jillian? I’ve known Jillian (Jacquline) a long time I think she’s amazing, I just think about people at a similar level obviously I’ve got to work a lot with Maren and that’s been really amazing. If it’s the right song I’d love to do a feature with The Cadillac Three that would really good. In Nashville you can just throw a rock and hit somebody who is talented. It’s a really hard question to answer.

TC:      It must be nice to be over here and your friends are touring at the same time?

RH:      It’s really weird we saw Thomas Rhett and Old Dominion in Glasgow, they came to our show. Then we went to Bros O and TC3 last night in London. Funny to go across an ocean and see people you see all the time at home. It’s makes it seem not weird if we are all over here.

TC:     I think Charlie [Worsham] was there as well with Lucie [Silvas].

RH:   Brad Tutsi is good friend of mine we’ve written a lot of songs together over the years. I’ve toured with Thomas, Bros O are our neighbours. We’ve been friends with Lucie for a long time. TC3 were the first band to take me out on the road.

TC:   I interviewed Old Dominion last week, I felt sorry for them as they’d just flown in after the CMA’s, Brad was still asleep and Whit didn’t make the interview!

RH:   Whomever is in charge of their calendar does not take it easy on those dudes.

TC:   I felt sorry for them but they were on good form. You have to go with the ride, you’ve strived for so long to get there, you’ve gotta take it.

RH:  You get good at sleeping standing up, that’s what happens.