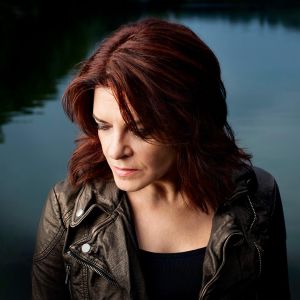 On an otherwise normal autumnal evening in Mason City, Iowa.. There was a show in town that night. Not so rare as the local community college, North Iowa Area Community College (NIACC) is known for hosting budding artists, traveling musicals and plays, and sometimes even bigger names than the town is used to hosting. But, tonight was different. Tonight, the closest thing I’ll get to seeing country music royalty was in town. Rosanne Cash. Yes, that Cash. Daughter of the legendary man in black himself. I’m ashamed of myself to say I hadn’t heard much of her music before, or if I did, I didn’t know it. However that soon changed as I enjoyed the show, watching her sing with anticipation at what song she’d sing next, seeing if I’d recognize it and feel foolish for not remembering… and of course, wondering if we’d hear any of her Father’s classics.

Cash opened the show with a few songs off her most recent album, “The River & The Thread”, which also notably earned her a Grammy award in 2015. It had been a while since she won a Grammy award. In her own words, “the last time I won a Grammy, Regan was in office, if that tells you anything”. Accompanying her on guitar and occasional piano was John Leventhal.. a musical genius in his own right. He’s a Grammy award winning songwriter, musician, and producer.. Not to mention the headliner’s husband. If you’re into music, there’s a good chance you’ve heard Leventhal’s work as he’s been involved with countless music projects over the years and in varying genres.

Each of the songs she sang from this album, she introduced with a small story.. Telling of the roots of the song and setting the framework for what we were about to hear. Cash was born in Memphis, TN and has other family members scattered throughout the south. Although she didn’t stay in Memphis, and has lived in California and currently resides in New York City, it’s that southern heritage that she brings out in her musical journeys. Sometimes taking us all back to a time before her, and her Father existed. She did so, so eloquently with her song, The Sunken Lands, telling us about a place in the Delta South.. I’d try and retell the story myself, but for the sake of the songs story, here’s a clip of her singing this very song from YouTube, including the introduction..

The night continued on, and she began to sing songs from earlier albums. Some of the notable tunes were from, “The List” which included a couple of her late Father’s singles, Long Black Veil, and Tennessee Flat Top Box. She also sang a song she wrote as a teen that Emmylou Harris and Linda Ronstadt recorded called, Western Wall.

Watching Ms. Cash was a complete joy, and it’s no wonder that she’s the daughter of one of country music’s all time greats. Those genes were passed down to her, and she has a talent only she could pursue knowing all the obstacles that the music industry can present. She has a poise on the stage that is both resemblant of her Father’s stage presence, but also of her own. She commands the stage in the most respectable way possible. She’s worked hard to get where she is, and that’s obvious because of her success. Some artists use family lineage and last names to try and get into the business, and with a last name like Cash, who wouldn’t? Rosanne Cash. That’s who.