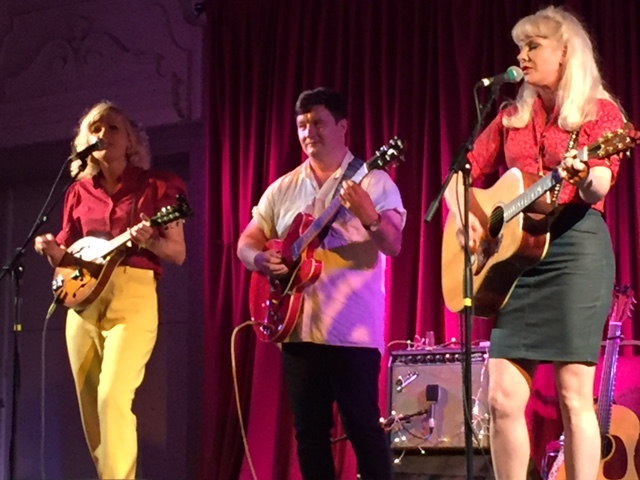 A self-confessed fan of this talented trio, I have seen them live on many an occasion but was particularly excited to be on the way to their first headline gig at London’s beautiful Bush Hall which I was sure would brighten up a damp, autumnal Monday evening. A sign of my age, maybe, but I was happy to find out it would be an all-seated event so I wouldn’t have to worry about drinks getting knocked flying, toes getting trodden on and the other associated pitfalls of a standing concert!

With the band having released two very successful albums in relatively quick succession ( Shadowbirds in Sept 2014 and The Truth and the Lie in March 2016, my review here  it had come as a pleasant surprise in the past few weeks to find out that this creative force had recently recorded a further six track ” mini album “, Voyager, described by them as a ” sister” to their latest release and expanding its stories. Released just last Friday I had already played it on loop over the weekend, so was especially looking forwards to hearing the live versions of some of the tracks at this concert.

There are always a lot of familiar faces in the audience whenever I see RSJ live, a testimony not only to their wonderful writing and engaging performances but also to the genuine appreciation and respect they show their followers, and Monday was no exception, we were all eagerly awaiting the evening ahead.

Kicking off proceedings was an opening set by UK based duo ” Two Ways Home” who I was looking forwards to hearing having checked out their thoughtful folk/pop/country ( I hate trying to categorise !) writing beforehand. Isi, originally from Austria, and Cotswolds born Lewis, were joined on stage by Michael Clancy on lead guitar, vocals were sadly often hard to hear but they played and a good mix of upbeat numbers ( such as Just for Now) and ballads ( Better Days, video coming soon apparently, and Time Lasts For Ever included ) which came across very well. Their confidence grew as they continued and a brand new song ” Push and Pull” featuring Isi on lead vocals caught my ears in particular ( she is a talented multi instrumentalist too, playing auto harp, ukelele and electric mandolin during their short set! ) I recommend you check them out if they are a new name to you, their EP ” Wood For Trees” being the most country tinged of their releases to date. Here ‘s a clip from its launch last summer

A short break and Red Sky July took to the stage, joined by Mark Neary on pedal steel/bass guitar, a real treat for me as I had only seen this line up on one previous occasion and their more melancholy numbers ( of which there are a few as you may well know! ) truly lend themselves to the steel.

Kicking things off with the title track from ” The Truth and the Lie” their wonderful harmonies were evident from the start, as was a brilliant lead guitar solo from Ally, the first of many during the evening. This song is a truly great composition about the awkward subject of admitting to having “inappropriate” feelings for an old friend

A brief hello and thanks for coming out from Shelly, and the jangling guitar introduction to ” Losing You” rang out, this being one of my favourites of their many break up songs, not all of which are tear jerkers by the way and I am glad to say they included a couple of the more upbeat ones later in the set, the fun and clever ” Walking Country Song”

and the empowering ” Taking Myself Back”. The tempo then slowed down considerably with a track from the afore-mentioned ” Voyager”, Shelly explaining that each of the band had written an autobiographical song which they were in the process of recording and “1972 Onwards” was hers….relationships, religion, music, family are all mentioned in this lilting 6/8 number, again fantastic lyrically and I particularly love the line ” It was like Gene Kelly had asked me to dance when I first heard 1999 in 1982″ . Their set included one further track from this release , ” House of Cards”, a haunting write about the fragility of a relationship which is truly beautiful and extremely moving.

The remainder of the set consisted of songs from their back catalogue and a few well re-worked covers ( Travellin’ Soldier and Take it to the Limit included) which were interspersed, as always, with humorous and insightful chat from the two ladies in the band, Ally as usual sitting between them occasionally muttering a few choice phrases in his gorgeous Glaswegian accent!

The highlights for me whenever I see Red Sky July live are when they play their more personal songs, and this gig was no exception. A special mention must go out to ” In Black”, Charity explaining how Shelly began to cry last time they played it live, not surprising really as it about what she went through after Ally ( her husband) suffered a severe brain aneurism which changed everything forever and she was never the same person again. What an intense performance, just Shelly and Charity for this number and the lyrics rang out crystal clear….” Can you look and see me the way you once did? Cos i am trying to be her again, but I’ve seen too much and you can’t take that back ……… I’ll put on my white silk dress but i feel like I should be in black”. Thankfully no tears were shed this time around, on stage at least! 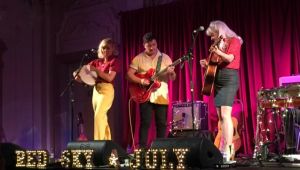 Closing with one of their few love songs, the dreamy ” Sway”, it was all too soon time to leave the cocoon of this lovely venue, return to the real world and hit the hustle and bustle of West London. A total reality check to be sure! I took two Red Sky July ” virgins” with me to the concert, both of whom are now total converts and one commented as we left that she couldn’t understand why they aren’t huge stars. The music business sure is a strange beast! But I am so happy to see that Red Sky July have received two nominations in this years British Country Music Awards, for Group and UK Album of the Year, good luck with those, guys, and see you out on the road again very soon I hope!