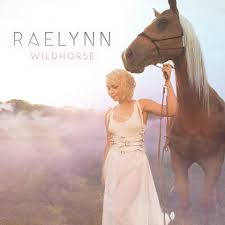 RaeLynn (real name Racheal Lynn Woodward) auditioned on season 2 of The Voice in 2012. Mentored by Blake Shelton she reached the quarter final of the show.  Releasing an EP, simply titled ‘Me’ through Valory Music Co in 2015 it debuted at #49 and she was later dropped by the label. In 2016 she inked a new deal with Warner Bros Records, paving the way for her debut album to be released.

‘WildHorse’ is a work of art that takes you on a journey, through the past five years of her life. From being on The Voice, to re-locating to Nashville. From her parents divorce, to her settling down and getting married. This record has it all, with RaeLynn co-writing eleven of the twelve tracks. It was produced by two of her frequent co-writers, Nicolle Galyon and Jimmy Robbins, and has a pop country feel throughout.

Carefree title track ‘Wildhorse’ was inspired by a poem her grandmother wrote. “I don’t want no fences around me, nobody boxing me in” she warns on this sassy number, which is an anthem for independent woman.

Written alongside Nicolle Galyon and  Jimmy Robbins, powerful ballad ‘Love Triangle’ deals with the aftermath of her parents divorce. The track sees her reminiscing about the pain she felt as a child being stuck in the middle of a heartbreaking situation.

On ‘Lonely Call’ she has her ex calling her up after midnight. “Let it ring, let it ring, all night long, cause I ain’t your lonely call” she sings firmly over a banjo infused melody, whilst letting his calls go through to her voicemail. After a night out made her question her husband on how attractive he finds other woman, ‘Insecure’ serves as a reminder for a woman to trust her man. This catchy number will no doubt have you singing along in no time, and sounds like something Miranda Lambert would stick her teeth into.

Making the record a more personal affair is ‘a song called ‘Young’.  It features RaeLynn’s cousin Leeland Mooring, and the mid-tempo tune  celebrates being young at heart. The other feature on the album comes courtesy of label mates Dan + Shay, with their track titled ‘Stay’.

“A diamonds just a diamond ’til you put it on the right left hand. Love is just a word ’til you feel it and finally understand” she swoons on the romantic ‘Diamonds’. Clearly inspired by husband Josh Davis, the guitar riff used  at the beginning  of this sweet track is the same as Brad Paisley’s ‘Remind Me’. ‘Praying For Rain’ is a lovely ballad that suggests living a rural lifestyle and praying to God is the key to self knowledge. “I find my wings in this Texas wind” she states on the albums closing track.

What’s your favourite song on WildHorse? Let us know.

ICYMI: The Swon Brothers At CRS