It was an opportunity to get to see some great upcoming artists who haven’t made it across to us in the UK yet, along with a few favourites – I’m sure you know just how much of a Frankie Ballard fan I am by now – and it was great to see a full set from Cam after her 5 song set at iTunes Festival last year. Brothers Osborne were also a notable addition to the line-up. If you haven’t heard their debut album Pawn Shop, it’s definitely worth a listen. I didn’t manage to catch their set as I was lucky enough to have a meet and greet with Kelsea Ballerini, but I’ll introduce you to a few of the acts on the bill that I loved and hope head across to the UK to see us soon.

Mo Pitney kicked off the festival with a more traditional country sound. He has already made a big impression on the country scene with hit singles Country and Boy and a Girl Thing, both of which were included in his set. Sadly, the day before the festival started, we received the sad news that country legend Merle Haggard had passed away, and Mo paid homage to him in his set, telling a story about meeting him, before playing his song I Met Merle Haggard Today. I’ve wanted to see Mo live for a while, and I loved his set. He’s definitely one to watch out for the future.

Blackjack Billy are a country rock group, and describe their sound as ‘redneck rock’. With a base in Nashville, members Rob Blackledge, Noll Billings and Jeff Coplan have written songs with Love and Theft, Canaan Smith and Eric Paslay, amongst others. Their set included songs The Booze Cruise and Why God Made Summertime, which seemed an appropriate choice given their setting. The first thing that stood out was how energetic their performance was and what talented musicians they are. If you love bands like The Cadillac Three, go give these guys a listen!

Jamie Lynn Spears stepped down the country music path when she released her first country EP back in 2013 and had a very memorable performance at The Opry recently. She has had a hand in writing the majority of the songs she sings, and spoke very highly of the songwriters she has worked with. I have to agree with her that the songwriter’s often ‘don’t get enough credit’. Her set was a mix of songs from her Journey EP, including Shotgun Wedding which she joked her Dad is really proud of, a fantastic new song called Pink Lipstick and her own version of Jana Kramer’s I Got The Boy, which she co-wrote. She included a couple of lines of sister Britney’s hit song Oops, I Did It Again mid song, and definitely proved herself musically in her live set. She is set to release new music shortly, which I’m excited to check out.

Chuck Wicks is a singer songwriter, who also co-hosts Nash FM’s America Morning Show. The biggest crowd response was for his debut hit single from 2007 –  Stealing Cinderella. In February this year, he released his second album Turning Point, and included a lot of songs from that in his set – stand out songs being Us Again and Salt Life. He played his own version of I Don’t Do Lonely Well, which he wrote but was previously recorded by Jason Aldean for his Night Train album. Not only an incredible voice, a charming stage presence and an adorable moment where he picked a small child from the audience to duet with him on one of his songs, but his meet and greet line after his set was the longest of the entire festival. He graciously spent about an hour meeting fans and taking pictures.

Them Dirty Roses describe themselves as a ‘southern roots rock and roll’ band, and are James and Frank Ford, with Ben Crain on bass and Andrew Davis on lead guitar. Their new EP Trouble was released the day after their performance at Springjam and Grew Up In The Country is probably my favourite track from it. Their set included some new songs from this as well as songs from their debut self titled EP. Hailing from a small town in Alabama, their music is more of an edgier, rockier sound, and their live performance was enough to turn me into a fan and to go buy one of their t-shirts.

Parmalee are named after their hometown of Parmele, North Carolina and comprise of brothers Matt and Scott Thomas, cousin Barry Knox and friend Josh McSwain. I fell in love with their song Carolina back in 2013, and have been wanting to see them live for a while. They didn’t disappoint – and played my other favourite song of theirs Already Callin’ You Mine, as well as many others from their fantastic Feels Like Carolina album. Their music is a blend of country and rock with bluegrass influences. With latest single Roots set to be released at the end of the month, i can’t wait to hear their second album.

Kelsea Ballerini was one of the highlights of my entire weekend and she included every single song from her debut album The First Time in her set. Her current single Peter Pan is one of my favourites on her album, as well as Looking At Stars, and it was great to hear these live. She has co-written all of the songs on the album and shared stories about each of them before singing them. She held the attention of the crowd and was in the main support slot before Rascal Flatts came on stage, finishing her set with a mash up of pop songs including Britney Spears and Backstreet Boys, which got the crowd dancing. I was really impressed with her vocally, and haven’t stopped listening to her album since.

Brought to Panama City Beach by the same organisers as the Pepsi Gulf Jam over September’s Labor Day weekend, the crowd reached a maximum of about 6,700 people. I loved the chance to get to see some really great musicians in such a small setting. The 80 degree Florida sunshine and the 10 minute walk from the festival to the beach were the icing on the cake. Special shout out to new whiskey brand ‘Hillbilly Bourbon’, which debuted at the festival – I might have given it a try! There’s no word from Panama City Beach officials as to whether the festival will return next year yet, but if it does, I’d love to go back! 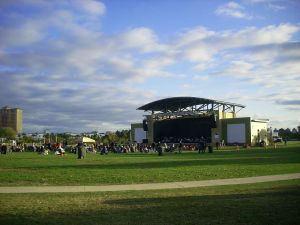