By Nick Cantrell and originally posted on Bellesandgals.com

Payton Taylor is the first US artist we have interviewed and there is no doubt that she is a rising star in the country music scene. We caught up with Payton last week and this is is how it went.

Hi Payton, we first featured you on Belles and Gals a couple of weeks ago, with an excellent cover of Chris Stapleton’s ‘Tennessee Whiskey’. What made you choose that song? It’s certainly not easy to cover a Chris Stapleton number well!

Thank you, I love Chris and I have been a huge fan of his since his bluegrass band “The Steeldrivers” (if you have never listen to them, please do!) It’s definitely not easy, and no one can sing it like Chris Stapleton David Allan Coe or George Jones! Thanks for taking a listen to my take on it. Dean Dillon and Linda Hargrove really wrote something special. I’ve gotten to meet Dean a few times, and Dean is a legend himself!

Tell us about your musical past. What inspired you to start singing in the first place? Has it always been country music?

I believe I got my musical education from my grandfather’s record player. He had the greatest record collection spanning from Waylon Jennings to Fleetwood Mac. His player and collection was passed on to me, and through those records, I fell in love with country and his 60s and 70s rock and R&B. I had always loved to sing since I was little, Shirley Temple was my childhood idol. Mom took me (most likely because I begged her so much and she had just about had it) to church choir practices, musical auditions, and really anywhere I could get myself up to sing. When I came to Nashville for the first time on a show choir trip, I fell in love with the city and its history. When I got home, I listened to his records with different ears and began to study them.

You obviously have quite some musical talent in the family, your sister Taryn another singer who we at Belles and Gals are mightily impressed with. What was in the New Jersey water?!

My dad and his entire side of the family is pretty musical, and while my mom is a pretty good shower singer, she has some music running on her side too. I am incredibly thankful for both of my parents always supporting the crazy dreams and ideas I had as a kid. In fact, my mom took me to my first musical audition before I could read because I begged her so much. Music aside, I really believe it’s the work ethic my parents have instilled in both my sister and I that has made us who we are. My parents have always been our biggest cheerleaders without ever taking on the role of stage mom/dad (which I am so incredibly thankful for)

One thing we’ve certainly picked up on is your social media work. It would be fair to say that you are one of the most entertaining artists to follow online and you do have quite a following! How much do you enjoy the social media side of being a singer?

Thank you! I honestly can’t imagine being an artist without having the tools we have today with social media. I was born in 1997 and although I remember the days of dial-up Internet, I really can’t remember a time without socials. What amazes me the most about social media, Twitter especially, is that people understand my strange sense of humor in less than 140 characters. I love keeping in touch with all of my followers by watching their Snapchat stories and reading their Twitter feeds. Even if I met somebody four years ago at a concert, I feel like I’ve been able to learn so much more about them and keep the connection going.

Tell us about your favorite performance to date?

My favorite performance was last year in Camdenton, Missouri. I got to open for one of my 90’s favorites, Tracy Lawrence, alongside some of my best friends on stage. The people of Camdenton were so welcoming and supportive of a new act. The Ozarks and the theater was beautiful too! Definitely my favorite so far.

If you could have written any country music song ever, which one would it be?

I wish I could’ve written “The Sky Is Blue” by Dolly Parton. It’s a song with a sharp simplicity that cuts right through you. Dolly is unmatched as a lyricist, and she amazes me with her words.

Being a UK based site, we do have a focus on a number of UK country acts. We understand you’ve worked with Belles and Gals favorites such as Dexeter and Lizzie Wilson. How did that come about?

Annette from Think Country UK has been my window to the other side of the pond. She has introduced me to so many great artists in the UK. I sat and wrote with Dexeter and Lizzie once in person. Thanks to Skype, we’ve been able to continue to collaborate!

And tell us a little bit about your songwriting. Have you got a certain process? It’s always fascinating to read how an artist approaches writing.

Honestly, I wish I did have a process. The only constants in my songwriting routine are pacing back-and-forth and drinking coffee; a lot of it. Maybe I pace because I’m too caffeinated…. Hmm.

Have you got a particular dream when it comes to singing? Is there somewhere particular you’d like to perform? Or do you dream about selling a million records, winning awards or performing a duet with someone in particular? Is it all of the above?

Playing the Opry at the Ryman would be my biggest dream come true. With the Ryman being the “mother church” of country music, I always get butterflies whenever I turn on WSM to listen to Eddie Stubbs (and I always do).

We always ask the same fun question! Everyone has an embarrassing first album or single they purchased when they were much younger. What was yours?

Well, I was an early 2000s/Britney Spears kid and I definitely wore out my copy of her “Baby One More Time” album. My dad took me to see her live in Philadelphia. It was my first concert, and he said several times he had to put his hands over my eyes! Keep in mind, I was four years old!

To finish Payton, tell us what the coming weeks and the rest of 2016 have in store?

2016 has already proved itself as a year of growth. I’m dedicating this year to finding my voice and finding what I want to say as an artist. That calls for a lot of songwriting. However, this summer I do have some shows coming up back in New Jersey! Check out paytontaylor.com!

If you are at CMAFest in Nashville this June, be sure to catch a live set from Payton 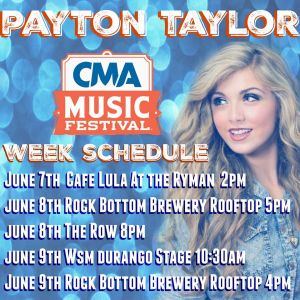