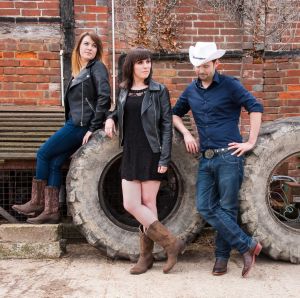 Tell us a bit about yourself / Band

We are a sibling UK country band from Kent and we’ve been gigging together for about 4 and a half years now. The band started when Abi decided to do a few solo gigs herself, following in the footsteps of Lou who had been playing solo for a few year previously. Abi asked Matt to accompany her on guitar and then asked Lou to perform backing vocals.

The setup really worked and we had a lot of fun and so ORFILA was born. We love country music so decided to base the band around the genre and to create a unique sound. We’ve been so lucky to have some amazing experiences as a band as we’ve supported The Script, The Stereophonics, Albert Hammond, Beverley Craven, we’ve recorded two albums, had a top ten UK country chart hit, played at Country 2 Country 2016, toured Nashville and been played on BBC Radio Kent, BBC Radio Shropshire and BBC Radio Scotland.

I remember listening to Dolly Parton and Shania Twain on car journeys with our Dad when I was little. I loved listening to their music as I was growing up and I know that’s where my love of country music stems from! I think the moment when I realised that country was the genre I wanted to write and perform was when I was around 15 and we went on a family holiday to Florida. The radio station we had on in the car every day was a country music station and I totally fell in love with it from a songwriters point of view. The story telling and structure really captured me and I knew it was something I had to pursue. When we got home I immediately started playing guitar and writing songs with a totally new perspective and continued to develop my writing style within the genre. My biggest influences are definitely Dolly and Shania. I found a lot of inspiration from Taylor Swift’s earlier material too. I also love artists such as Kacey Musgraves, Keith Urban, Lady Antebellum, Brad Paisley, Little Big Town and Carrie Underwood… to name a few!

I first discovered my love for country music when we all went on a family holiday to Florida and every time we went out in our hire car all that would be played was country music. That’s the time we heard Taylor Swift and “Teardrops on my Guitar” was playing a lot. I would say Lady Antebellum are my biggest influence as they are also a trio but their music really inspires me to write, especially on the piano.

I also remember there being a lot of country music in the car when we went to Florida but I didn’t properly discover the genre until a few years ago when I picked up the Band Perry’s debut album which was sitting on the CD player in the lounge. I loved the authenticity and lyrics and then explored other country artists which developed my love and appreciation for the genre. I’d say a huge influence for me is Brad Paisley. He’s top of the tree for me. He’s won everything, played every prestigious venue in the world and he’s not only an incredibly talented singer, he’s an amazing guitarist and songwriter too. I’m also a massive fan of Eric Church, Zac Brown Band, Luke Bryan and Chris Stapleton. They’re all amazing musicians who are also fantastic songwriters and they definitely inspire me to be the best I possibly can be.

Our first performance was supporting Ben Montague on his tour when he played in Folkestone almost 5 years ago. We have really learnt a lot since then. Mainly about our direction in terms of our sound and music that we produce and put out there.

We originally set out to have a pop/folk/country sound when we first started however, over time, the songs we were writing, our influences and the arrangements we were coming up with for our songs started to lean a lot more towards the country genre.

We love country music so much and I think that style just started to develop within our own music more and more. We feel that our second album is where we finally found our sound. Bands and artists on their musical journey will know and totally appreciate that it takes time, experimentation and growth as a musician to find your sound.

So it’s an exciting feeling when you know you’ve finally found it! And we definitely feel like we have. Even more so with the newer songs we’ve been writing since the second album was released in 2016.

It’s got to be the Grand Ole Opry. We visited there a few months ago and there’s something magical about that place. The history, the prestige, the legendary performances. Anyone who is anyone in country music has graced that stage. You’ve only made it in the world of country music once you’ve stood on that centre circle and played there!

I’d love to open for Little Big Town. Their superb vocal harmonies coupled with their incredible songwriting makes them one of the best acts out there and it’d be amazing for us, a band who are also very harmony-based, to share the stage with a band who influenced us.

Dolly! My goodness what an honor that would be. She’s a songwriting genius and is just such a country music legend.

If I could open for any country artist, for me, it would have to be Rascal Flatts. I’ve been following them for years and their music is so relatable. I feel that every song I hear of theirs I know what I’m in for and it’s a great. I think it would be awesome just to be on be road with them!

What is your favourite song to cover?

At the moment we love “Boondocks” by Little Big Town. We live for vocal harmonies and this song allows for three part harmonies aplenty! We also really like playing “I Ain’t Leaving Without Your Love” by Striking Matches (which also featured on the Nashville TV show). We’ve taken the song, added three part harmonies and a different rhythm to it and made it our own. Some audience members don’t know the song but they all say they really enjoy that one and get involved clappin’ or toe tappin’.

We try to be unique at our gigs so we try to play as much original material as we can. We tend to write songs that are personal and relatable in one way or another. They can be about love, life and following your dreams.

We try to capture a recognizably country vibe but also create a unique sound that people would instantly recognize as ORFILA. We base our songs around vocals/three-part harmonies, a resonator guitar and a cajon. As we’re siblings we also like to have a bit of fun onstage and joke around a bit too.

Country music, especially in the UK, has been given a new lease of life in the past few years bringing the genre to the forefront of popular music. With the historic chart success of bands such as The Shires and Ward Thomas it shows that there is certainly a market for, and a love of, country music in the UK. Country 2 Country has been getting bigger and bigger over the past few years and big US country musicians have also been coming over. It’s an amazing time to be a country artist in the UK because it’s ever growing!

This year marks our fifth anniversary so we are hoping to do something to commemorate that as it’s a huge milestone for us. We have a few awesome gigs lined up for the year, we’re appearing on BBC Radio Kent at the end of January, supporting Hank Wangford in March and have a few things that we can’t announce yet! This is usually the time of the year when we’re in the process of planning the year ahead so watch this space!