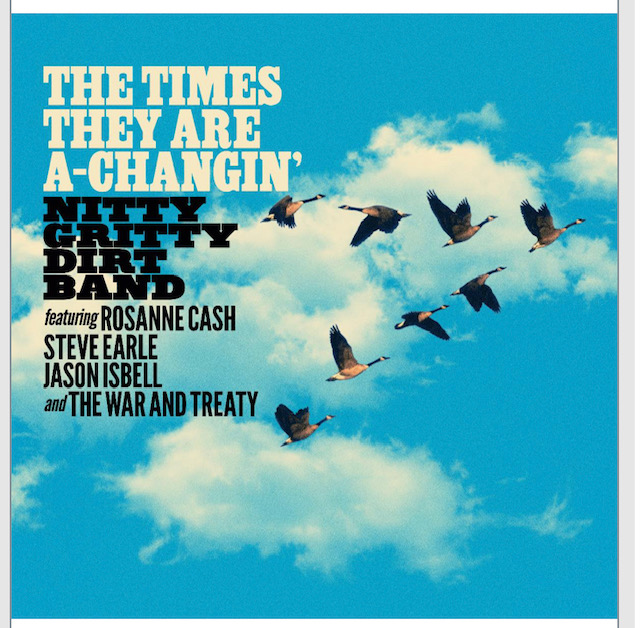 A great song will always stand the test of time, and there’s even some who’s inspiring and rallying message is as important today as when originally penned. This is definitely the case on both scores with Bob Dylan’s career-altering folksong, ” The Times They Are A-Changin” released an incredible 57 years ago and which has just been very timely covered by The Nitty Gritty Dirt Band during this new period of national unrest Stateside where there’s also a renewed fire for justice in the long-fought battle for civil rights. The urgency in the message of Dylan’s original is as apparent as ever in this new version, with all proceeds from the track will going to benefit Feeding America, an organisation dedicated to helping fight hunger in the United States.

Produced by Grammy Award winner Ray Kennedy, the current members of NGDB have teamed up with an all-star cast with their lead singer Jeff Hanna’s opening and closing verses bookending those from Jason Isbell ( who also adds slide guitar)  Rosanne Cash, The War and Treaty and Steve Earle all of whom are no strangers to writing and singing their beliefs on record.  And who better to provide the song’s trademark harmonica, along with harmony vocals, than Jeff’s wife Matraca Berg, of course a phenomenal artist and songwriting legend in her own right. The band members gathered to record their part early last year before most of Nashville’s studios shut temporarily due to the Covid-19 pandemic,  Hanna explains how the various contributions were ” pulled together” gradually throughout the year with Cash recording at her NYC home studio and Earle at Electric Lady in Greenwich Village.

” I’ve been a fan of Bob Dylan’s since I was a teenager, living in California” says Hanna. ” I was fortunate enough to see him sing ‘ The Times They Are A-Changing’ in concert the year the song was released;1964″ continuing ” It moved me deeply then and that hasn’t changed. The lyrics are as relevant today as they were when Dylan wrote it. Maybe even more so”.
The track is available now for ” name your price” purchase on the band’s Bandcamp page  https://thenittygrittydirtband.bandcamp.com/releases  and on February 8th will be available on digital service providers with those proceeds going to the same fantastic cause which you can find out more about at feedingamerica.org
To read more Country Music News click Here
To read Country Music Reviews click https://thinkcountrymusic.com/whats-new/

Andrea Vasquez Releases Video for “Bed You Made”