Country singer/songwriter and accomplished actor Stephen Martines released his emotional new single “Like Father, Like Son” today. Written by Martines and Madonna Nash, the single tells the story of the mutual love between a father and son as the father passes away – based on Martines’ real-life loss of his own father. The emotions brought up in “Like Father, Like Son” are those that anyone who has lost a parent or loved one will be able to relate to. Listen to the single here. 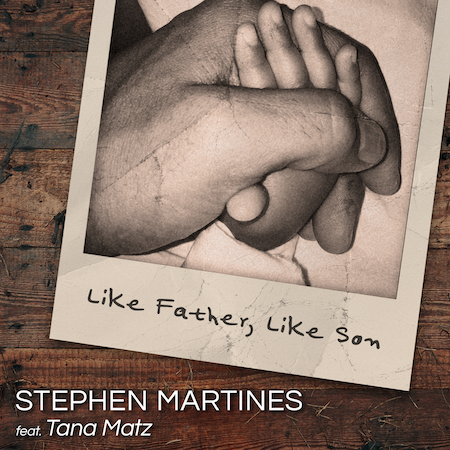 “I hope this song will resonate with anyone experiencing loss, grief or sadness of any kind. Perhaps even pick up the phone and tell someone close to you that you love them. For life is too short,” said Martines.

As an artist, Martines is a triple threat: singer, songwriter and actor. On television he is best known for his roles on shows like General Hospital and The Guiding Light, as well as many others, including The Closer, Vampire Diaries and Burn Notice. His love of songwriting brought him to Nashville, where he has had the chance to write with Jon Nite, Ross Copperman, Nicole Gallyon and Brandon Ray, among others. As a singer, he has released singles including “Just Like a Kiss,” “Sounds Like Whiskey” and “Alright.” For more information visit stephenmartinesmusic.com.

About Stephen Martines
Stephen Martines is a gifted singer/songwriter/actor who grew up in St. Louis, Missouri, where he excelled as a soccer player, even being drafted into MLS for the 1996 Kansas City Wiz’s inaugural season. After serving in the United States Air Force for two years and a successful stint as a nationally-recognized model, he moved to Los Angeles in 1998 and began a career in television as a regular on shows like General Hospital and The Guiding Light – eventually branching out into prime-time television with roles on The Closer, Vampire Diaries and Burn Notice, among others. Along the way, his passion for songwriting called him to Nashville where he became a songwriter in the Warner-Chappell stable. This contact gave him the opportunity to write and hone his craft with mega-talents like Jon Nite, Ross Copperman, Jay Brunswick, Nicole Gallyon, Josh Hoge, Josh Dunne and Brandon Ray, just to name a few. Now a recording artist, Stephen released his first single in 2017. Stephen has been actively performing and recording songs for his debut album, turning in rock-solid performances at the 2017, 2018 and 2019 CMA Music Festivals in Nashville. Following his second single, “Just Like a Kiss” (co-penned by country superstar Brett Young) and his summer, 2018 release, “Sounds Like Whiskey” (which held the #1 spot on The Iceman’s New Country Artist Chart for seven weeks running), Stephen and his band tore it up at the Country Smooth Fest in New Orleans alongside country music luminaries Hunter Hayes, Tyler Farr and Granger Smith. Fans can expect more new music from Stephen throughout 2020.

DIANA JONES TO RELEASE NEW ALBUM ‘SONG TO A REFUGEE’ ...