Today, Live Nation is delighted to announce details of Next From Nashville , an exciting music initiative showcasing the city’s rising stars, premiering for the first time in the UK at Europe’s leading new-music festival  The Great Escape on 14th May , and presented by CMA (Country Music Association).

With performances by Blanco Brown, Danielle Bradbery and The Sisterhood Band , the showcase will be followed by a string of UK tour dates, including London (O2 Shepherd’s Bush Empire), Liverpool (Arts Club), Glasgow (St. Luke’s) and Birmingham (O2 Institute2) between 16th – 20th May. 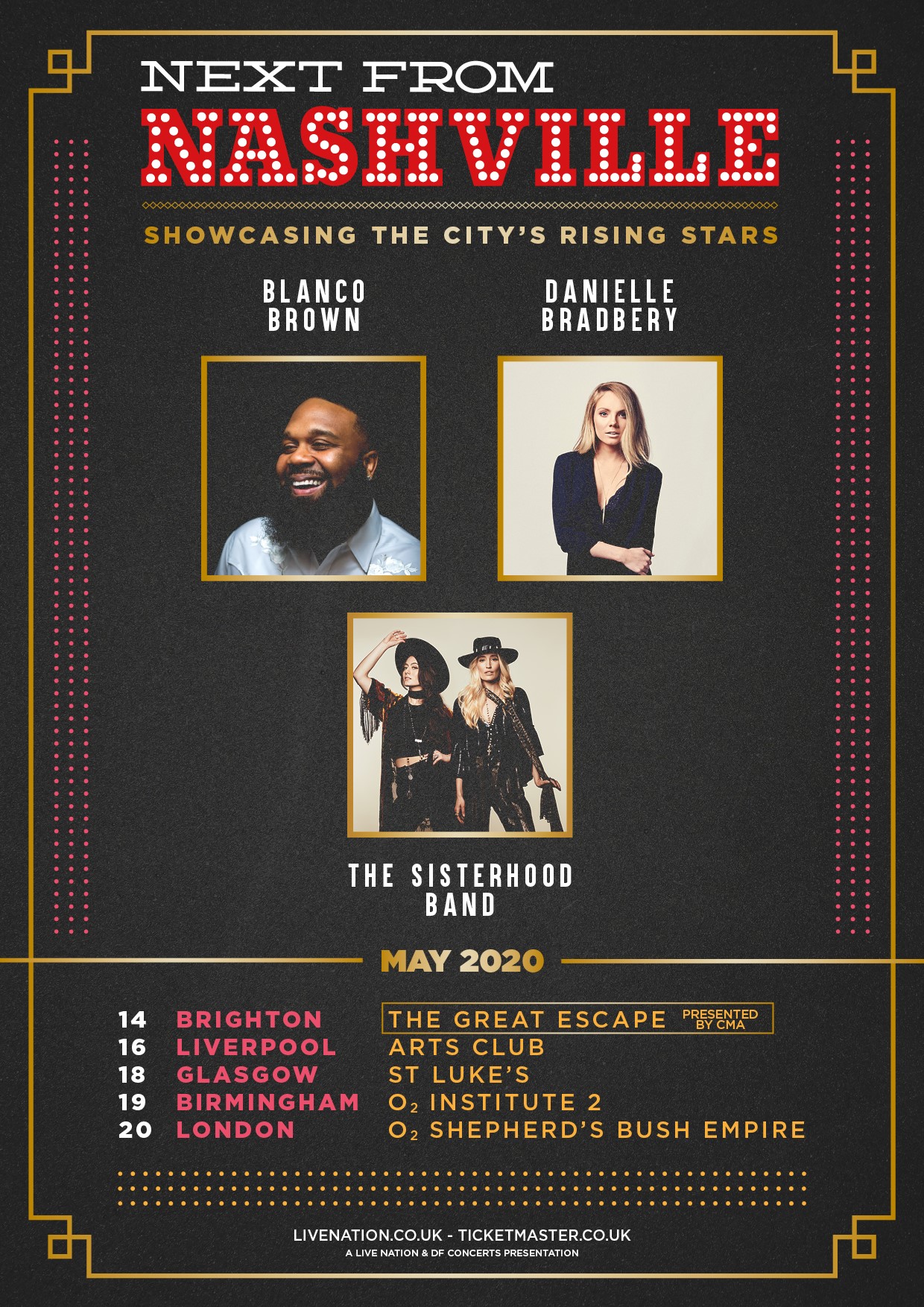 Already an established stage at Live Nation’s premiere family of country music festivals across the U.S, Next  From Nashville is a credible initiative supporting emerging musical talent from the city; whilst Nashville is at the heart of the global Country Music scene, the city widely known as Music City is also home to many outstanding artists performing a variety of genres including rap, rock and pop. Next from Nashville champions the city’s musical diversity and progressive sound by bringing the showcase to a bigger audience than ever before in 2020.

Blurring the lines between Country and hip-hop music, Blanco Brown makes a southern sound that he proudly calls “TrailerTrap”. It’s a boundary-breaking, multicolored genre of his very own — which draws upon the rawness and storytelling abilities of his two biggest musical influences, Johnny Cash and Outkast. Influenced equally by rap and country music, his ability to combine the two brought him immediate success in his debut country-trap viral hit ‘ The Git Up ’ released last summer. The song is also served with an interactive choreographed dance clip which averaged nearly one million views in its initial three days of posting.  Blanco said: I’m super excited to be playing in the UK again! Last time I was there I was so inspired and it  motivated me to write a few songs, hopefully I get to share those with y’all sooner than later!

ACM New Female Artist of the Year nominee and multi-faceted artist Danielle Bradbery recently featured on the Charlie’s Angels soundtrack alongside Ariana Grande, Normani, Nicki Minaj, Kim Petras and more. She re-introduced herself two years ago with sophomore album I Don’t Believe We’ve Met , having taken some time to hone her songwriting craft and establish a blend of her R&B, soul and country influences. Danielle has been fine-tuning her unique sound since getting her start winning Season 4 of NBC’s The Voice and achieved multiple ACM nominations as well as CMT Breakthrough Video of the Year and CMT Performance of the Year .  Danielle said: I’m so excited to come back to the UK. The fans are incredible and I couldn’t be more pumped to  be playing The Great Escape!!

The Sisterhood Band are an organic blend of the open melodies of classic West Coast folk & and the magnetic swagger of timeless rock n’ roll, powered by Alyssa and Ruby ’s soaring richly textured harmonies and effortless chemistry. Both ladies have strong musical DNA: Alyssa is the daughter of Kathie Baillie & Michael Bonagura (the core of country band Baillie & The Boys) and Ruby ’s father is rock icon Rod Stewart. Having met whilst both working on solo careers, they bonded over a mutual love of Joni Mitchell and established a sound and style of their own. With a debut album due this year, 2020 looks bright for The Sisterhood Band.  Alyssa and Ruby said: Coming back to the UK is like coming home for us! The Sisterhood Band’s first tour was in  the UK and we’ve grown so much since then. We are very excited to share our new music with our friends and  fans that we’ve made there over the years, and share the stage with some of the most incredible talent that’s  coming from Nashville!

Anna-Sophie Mertens, VP Touring Live Nation Concerts says: “The Great Escape is the perfect platform for  Next From Nashville to present the most exciting acts emerging from the city’s scene. Nashville has been  responsible for an array of prolific artists, songwriters and musicians. We look forward to showcasing some of  this talent at the Great Escape and on its nationwide tour for the first ever U.K. edition of Next From Nashville.”

Milly Olykan, CMA Vice President, International Relations & Development says : “We are excited about the  growth and development of the Country market we’ve seen in the U.K. over the past few years. With the  ongoing support of the BBC, an increased Country radio presence in the U.K. and a solid touring and festival  market, it‘s a great time for us to showcase the genre at The Great Escape and engage with fans and industry  who have not yet discovered Country music”

A new generation of Nashville sounds are already making their mark on British culture, particularly in the UK’s Country Music scene. Next From Nashville is a new offering beyond this world, providing UK fans access to the next best talent to emerge from the legendary Music City.

Tickets for the Next From Nashville tour are available Friday 28th February at 9am from: https://www.livenation.co.uk/ .

Tickets for The Great Escape Festival are on sale now from https://greatescapefestival.com/

Ahead of releasing new album ‘Good Years’ on March 13...