Following on from their initial 2019 EP, which received critical acclaim across the Roots and Americana world:

My Darling Clementine and the country songs of Elvis Costello are a match made in heaven. – The Alternate Root, USA 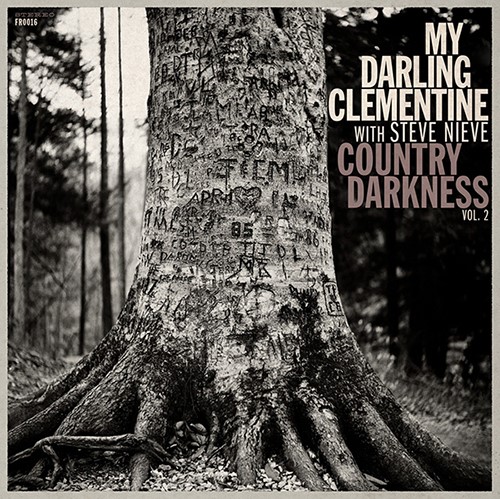 ….Vol 2, due on 5 June, will be preceded by the digital single ‘Different Finger’ on 22 May. The set is completed by the tracks ‘Either Side Of The Same Town’, ‘Too Soon To Know’ and ‘I Lost You’, a song Costello penned with legendary Nashville singer-songwriter Jim Lauderdale.

When we all first convened at Steve’s house in France last year, we had a long list of around twenty-five songs that we deemed as country / country-soul, which we then proceeded to whittle down to twelve, choosing songs that worked best for two voices and contained lyrics that we could adapt as conversations. After we had decided on which key, the tempo, the basic arrangement, we left Steve to record a solo piano / keys track, setting the feel for the songs, before sending it to producer Colin Elliot back in England, for us build into a full arrangement with the band. We had not worked that way before. It was an interesting experience and one that, despite my initial reservations about us not all being in the same room, playing live, has worked out well. A lot of credit for that must go to Colin Elliott, Shez Sheridan and Dean Beresford, our guitar, bass and drums foundation.

During the past 9 years King and Dalgleish have released 4 albums, played over 700 shows worldwide, and collaborated with a wide variety of fellow artists including Graham Parker, Kinky Friedman, The Brodsky Quartet, Jim Lauderdale and crime writer Mark Billingham. They have picked up various awards for their heart-on-sleeve song-craft spotlighting the vagaries of romance and the human condition,  and their match-made-in-heaven harmonies.

Known the world over as Elvis Costello’s righthand man, Steve Nieve has worked with Elvis since 1977, recording with him for the first time on his second album This Year’s Model. He was a founding member of The Attractions, and now, for over 20 years, one of The Imposters. A Rock & Roll Hall Of Fame member, Nieve is one of the most in-demand session keyboard players in the world.

Country Darkness Vol.2 will be released via Fretsore Records on digital services worldwide and on limited edition 12” vinyl.

Either Side Of The Same Town:

Without question one of our favourite Elvis songs, of any style. I think Elvis must have been listening to a lot of Dan Penn when he wrote this. It is a song mined from the same seam as The Dark End Of The Street, originally a hit for James Carr.  One of my favourite songs sung by one the greatest songwriters. In 2006 Lou was on tour with The Brodsky Quartet as their guest vocalist and they performed a version of this song, arranged for quartet and voice by Brodsky viola player Paul Cassidy, based on the original demo Elvis had given to Paul. Quite a lot different from how it ended up on The Delivery Man album, and in turn, very different from our version here.

This songs comes from the more acoustic, bluegrass album, Secret, Profane & Sugarcane and is co-written by Jim Lauderdale, who was also part of the touring ensemble Elvis put together at that time. Lou and I shared a festival bill with Jim at the River Town Festival in Bristol in 2017 and our paths have crossed a few times, most recently at a festival in Lafayette, Louisiana. Jim is one of the sweetest, and funniest guys and a master of the high harmony. A very fine songwriter too. The original of this opens with a guitar riff which then reoccurs later. We replaced that with Steve’s arpeggiated piano motif. Although written originally for one voice, the song works particularly well as a conversational duet.

A song that just had to be done for this project. One of EC’s most authentic honky-tonkers, like Stranger in the House, it is a classic country song, although still with a few songwriting idiosyncrasies that are totally Costello (as opposed to the simplicity of say Harlan Howard or Merle Haggard). Steve had played on the original so we wanted to find a different approach, as we have tried with all these songs, so for this we went with the Marty Robbins treatment. Hats off to Piero Tucci for some stunning accordion playing, and also the beautiful Spanish guitar styling of Shez Sheridan

Too Soon To Know:

This song turned out much more moody and atmospheric than any of us thought. In 2016 Darlene Love recorded this song, duetting with will Bill Medley, approaching it in that true 60s soul style she is famous for. I had initially thought we may also go in that direction but once Steve had set the tone with his spooky keys, and sombre feel, the song went somewhere else altogether, and I would argue all the better for it. We have taken a more understated vocal approach to try and set it apart from previous versions. Of any of the songs we have cut so far, this track personifies the phrase Country Darkness.

For more information on My Darling Clementine and Fretsore Records please visit: