Two-time ACM Awards nominated trio Lady Antebellum showcases the raw power behind their No. 1 selling album OCEAN (BMLG Records), as they release LIVE: IN THE ROUND. Five standout tracks from their critically acclaimed studio album were recreated in one-take at Nashville’s Skyways Studios, as Lady A echoes new life into “the most powerful and passionate work that the trio has created,” (PEOPLE). Garnering more than 821 million video streams to date, Lady A captures the emotionally resonant project with standalone performances of each song – watch here. Offering an unconventional mix of OCEAN’s No. 1 hit and ACM Awards Single of the Year nominated single “What If I Never Get Over You” along with the immediate follow-up climbing at Country radio, “What I’m Leaving For,” LIVE: IN THE ROUND is now available at all digital retailers here.

“We really enjoyed getting to strip down some of our favourites songs from OCEAN and put focus on the lyrics that drew us in from the beginning,” Charles Kelley said. “It was refreshing to get back in the studio with just the three of us and our road band. We were able relive those initial feelings and reflect on how these songs have already made such a huge impact on our career.”

LIVE: IN THE ROUND shares an intimate take on fan-favourites such as the heartland-rock track “Boots” and “Be Patient With My Love,” a beautiful ode to commitment that balances raw feelings with squealing guitars. Additionally, Lady A mixes vulnerability and sonic textures on the “emotionally charged title track” (Rolling Stone) while breathing life into their “utterly beautiful” (Music Row) new single “What I’m Leaving For.” As the heartfelt track serves as the immediate follow-up to their recent GOLD certified chart topper “What If I Never Get Over You,” critics claim Lady A “highlights their signature trade-off technique” (US Weekly) and it’s “among the finest lyrics they’ve shared with Country radio,” (Taste of Country). 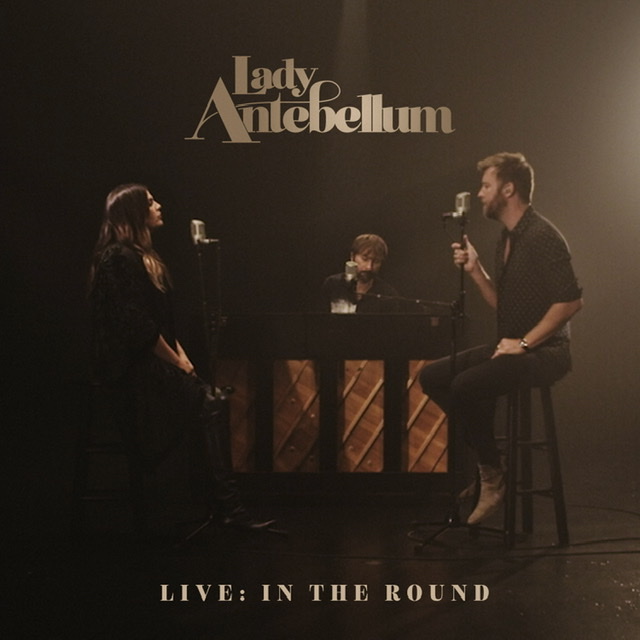 Over the course of their decade-plus career, Lady Antebellum has become one of the 21st century’s premier vocal groups, blending deeply felt emotions with classic Country sounds. As a Country-radio staple, the trio has amassed record-breaking success ushering in 10 No. 1 hits with more than 18 million album units and 34 million tracks sold and nearly 5 billion digital streams. The trio earned the biggest first week streams of their career with their critically acclaimed No. 1 album OCEAN that has been touted as “the finest album of the band’s career,” (Nashville Scene). Known for their 9X PLATINUM hit “Need You Now” which is the highest certified song by a Country group, they have earned ACM Awards and CMA Awards Vocal Group of the Yeartrophies three years in a row and countless other honors including seven GRAMMY® Awards, Billboard Music Awards, People’s Choice Awards, Teen Choice Awards and a Tony Award nod. Lady A’s upcoming OCEAN 2020 TOUR will mix a hit-filled set with fan-favorites and new songs when it launches on May 21 in Albuquerque, NM, with very special guest Jake Owen as direct support along with openers Maddie & Tae. For more information on tour dates and Lady A visit http://ladyantebellum.com/.

Ahead of New Album ‘Cold Comfort’ due April 3rd and F...