Two-time GRAMMY® winner Tanya Tucker will return to London and Glasgow this November for her first, full-headlining shows in the UK in more than two decades. Tanya thrills audiences with her nonstop, energetic set list of back-to-back hits, along with new songs from her GRAMMY®-winning Best Country Album, While I’m Livin’. 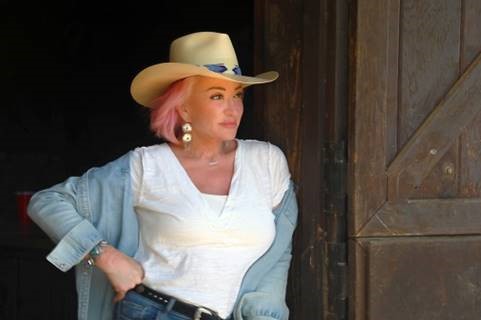 While I’m Livin’, which Rolling Stone declares “a stunning exuberant album that ranks among the year’s best,” is produced by Brandi Carlile and Shooter Jennings. While I’m Livin’ is largely comprised of songs written by Carlile, the twins Tim and Phil Hanseroth and Tanya.

Watch the videos for album tracks: “The Wheels of Laredo”, “Hard Luck”, “The House That Built Me” which features Tucker’s personal collection of family photos, and for the album’s cornerstone, “Bring My Flowers Now,” featuring Brandi Carlile and directed by acclaimed video director Trey Fanjoy.

Born in Seminole, Texas, Tanya had her first country hit, the classic “Delta Dawn,” at the age of 13 in 1972. Since that auspicious beginning, she has become one of the most admired and influential artists in country music history, amassing 23 Top 40 albums and a stellar string of 56 Top 40 singles, ten of which reached the No. 1 spot on the Billboard country charts. Tucker’s indelible songs include some of country music’s biggest hits such as the aforementioned “Delta Dawn,” “Soon,” “Two Sparrows in a Hurricane,” “It’s a Little Too Late,” “Trouble,” “Texas (When I Die),” “If It Don’t Come Easy” and “Strong Enough To Bend.” Tucker is also the recipient of numerous awards, including two CMAs, two ACMs and three CMT awards. Recently, Tucker received two GRAMMY® Awards for Best Country Album: While I’m Livin’ and Best Country Song: “Bring My Flowers Now.”

First New Album in 5 Years ‘Agricultural Tragic’ to b...

New Album ‘Lamentations’ from American Aquarium to be...