Award-winning, genre-crossing singer-songwriter, Elles Bailey is delighted to announce the ‘Ain’t Nothing But’ mini-series, consisting of three completely unique, never-been-seen before, live streams, all from White Noise Studios, where the performance will be streamed in uncompressed HD, from multiple angles, with the audio mixed live. 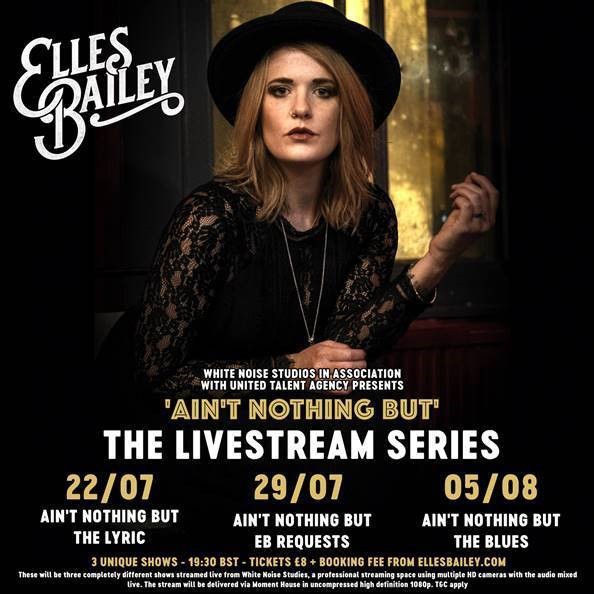 These 3 shows will feature a stellar cast of musicians and each will have a different theme.

Elles Bailey will pay tribute to the writers and songs that have become woven into her soul over her years as a musician.

This is your chance to curate the set list – just make sure you email Elles at ellesbailey@gmail.com with your request before the 28th July.

5th August – ‘Ain’t Nothing But’ The Blues

Elles will take you through a history of the some of faces that have inspired the ever-changing sound of the Blues over the years, paying homage to its roots, tribute to the icons, and highlighting a selection of her contemporaries on the scene today.

‘I am so excited to announce these three exclusive shows,’ says Elles, ‘White Noise Studios is such a great studio with top quality sound and picture and until we can properly do shows in person, I truly believe this is the next best thing!’

Never one to rest on her laurels, Elles has been devoting her time, trademark energy, and drive into various projects during lockdown, organising the very first global Lockdown Music Festival, releasing a charity single to support Help Them Help Us, as well as working on fresh material for her forthcoming third album.

She’s also picked up three major awards: ‘Little Piece of Heaven’ won UK Song of the Year at the 2020 UK Americana Awards, followed by two prestigious UKBlues Awards (awarded by The UKBlues Federation in May): Blues Album Of The Year AND  Blues Artist Of The Year.

For more info and for tickets to these shows, head to www.ellesbailey.com/tour

New single out now from Brand New Zeros as they release “An...